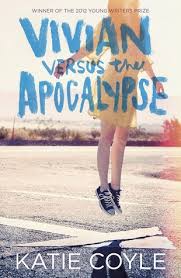 Vivian Versus the Apocalypse (2012) by Katie Coyle:

In my apocalypse fiction travels, I haven’t done a lot of slow crumbles. This YA novel written by a MFA-gettin’ author whom my one friend knew is about a declining America thanks to environmental  shenanigans, violence, and an aggressive new cult called the Church of America. Our heroine is Vivian Apple, whose parents have converted to the Church and vanished on what was supposed to be Rapture Day.

There are YA novel and coming of age tale tropes: Apple is a goody-goody with a wilder friend and a dreamy boy with dreamy eyes who also has a — dun dun dun — secret. There’s a whisper of over liberalism, based mostly on the fact that the Church of America is hardcore mocking American Christian conservatism (not that that’s not frequently deserved). Even the existence of decent religious people doesn’t fully wash away the suggestion that this is all a metaphor for fleeing flyover country. But hell, that’s okay. Vivian the character herself seems to be a 16-year-old liberal. Sometimes you have to get to the promised land of California. Everything is okay except for the Walking Dead-esque “no, I won’t use a gun!” moment of stupid. (Nothing in the world is as stupid as a woman objecting to her sheriff husband teaching their 11-year-old son to use a gun in the middle of zombie apocalypse, because it’s not safe. Nothing. I haven’t watched that show in a while.)

Fundamentally, all of these pieces work together much better than they should because Coyle is a solid, serious writer. And Vivian Apple is a sophisticated, but not overly adult character who has to deal with learning that her parents were real, perhaps not good people and that the world is not chock full of answers. That world which may also end in a few months. See, this new Church of Frick (Pittsburgh Homestead Strike shoutout? Probably! The books begins in Pittsburgh!) has a holy book. That book mentions two raptures. This is a great detail, because it sends those Believers left behind into a pious frenzy. They don’t want to be left behind again. That makes some of them very mean, and very against fornicating and homosexuality and such.

I’m still not sure how I feel about the revelations with the would-be villain at the end of the book. Plus, every YA novel and comic book movie now has to end not in an awesome open-ended way, but in a “YEP, A SEQUEL’S A-COMIN'” way.  This bugs me, but I’ll be reading the sequel without question.

This is the kind of book that gives YA fiction a good name. There’s nothing unserious about it, even if it’s not perfect. 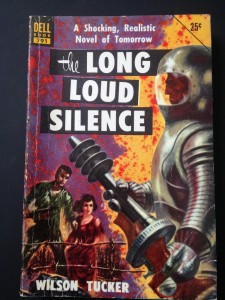 My copy of this early nuclear doom novel has the most gorgeous pulp cover. It’s a cheap paperback from the mid ’50s, but it looks amazing. I had meant to read it months before, but I would have bought it just for the cover (as I did a few other books I may or may not read).

Unfortunately, the cover is the best thing about this book. It’s not all bad. It has a stoic vibe that works well enough to hold interest for the 180-some pages. Basically, the US was attacked by nukes, regular bombs, and disease bombs. Unfortunately this happened right as our hero Russell Gary is on a major bender. He wakes up to a bad hangover of a dead hotel, a dead city, and oops, soldiers are preventing him from going back across the Mississippi river. This we have our class system. (I guess the West IS better. No, it is.)

Gary is a mildly interesting sort. He is a practical, unpleasant, manly man who smacks a girl, and keeps denying that she’s 19, because she looks young (spoiler alert: seducing him convinces him of her age). Wilson manages to write the first female character we meet as a ditz who clings to Gary, and who is wasting post-apocalyptic time collecting jewels.

There’s other awkwardness: Some years after the event, Gary implies at one point that he’s going to go back to a farmhouse of people in order to groom their child to be into him later. Unless I read that way wrong, and I rather hope I did.

For all the dramatic setting, this is kind of a character study of a man who was never very pleasant or kind, who becomes colder and crueler over the years, but never actually becomes a full monster. There’s some nuance in this picture. He saves a child from cannibals, then uses that fact to get a farmhouse and a place to stay and work for the winter. He never murders or steals without cause. But he’s a bit of an asshole (maybe he always was. There’s interesting hints about what war did to him that aren’t really mentioned after the beginning). And the part where he finally succeeds at his years-long goal of getting across the river is…odd. It’s the only part that doesn’t feel quite real in the book. I suppose it had to happen.

The ending is supposed to be cute, I think. I suppose it is a fair capper to all that has happened. Maybe ditzes have good survival skills after all. 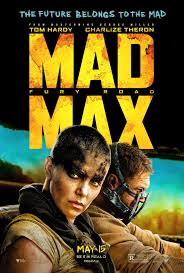 Somehow — somehow I accidentally saw the Fast and the Furious Seven (I forget its actual title, therefore I don’t know what to italicize!) in theaters, not having seen a single one of the previous six movies. (It’s because I was supposed to see American Sniper, and then I didn’t get to see that either, and everything was stupid.) I regret that all the more when I realize I saw “sure, cars can fly, and let’s film this action sequel in the dark because Paul Walker is unfortunately dead” in theaters instead of Fury Road. I watched this on the biggest available TV, but I curse myself for not seeing it theaters, the way I curse the six-year-old me who saw Free Willy while my brother and cousin trembled in exhilaration and fear at the T-Rex in Jurassic Park.

This is an action movie with strong characterization and world building, that doesn’t spoonfeed context to you. This is a manly action movie that is chock full of bad-ass women. This is a post-apocalyptic movie whose world defies logic and has way too much pageantry and nobody cares, because it’s awesome. This is a movie in which gorgeous women at one point spray each other with a hose, and the camera never leers. (Seriously, seriously picture that scene as shot by Michael Bay or a thousand other assholes).

It’s an ugly, bizarre world in Fury Road, but once you accept that this is is a freaky, car-based cult in control of almost all the resources around — yes, even resources for flaming guitar trucks —  it’s difficult not to be hooked. And for me, that’s saying something. The aesthetic in this film is is exactly the type I dislike because it feels bullshit and embarrassingly cheesy. It feels like people playing dress-up in fake gladiator garb. It feels awkward and inherently low budget. Somehow this movie completely kills that awkwardness through the power of serious, quality acting, and strange amounts of heart.

And with really scary, unexplained shit like those hunched over stilt people. I never want to know what that was about. I never want to know exactly “who killed the world” or how and why Immortan Joe’s cult came to be so quickly and effectively. I know this is mostly action movie that is about a million serious things, the way Attack the Block! is about a lot more than neon aliens. Yet it’s also just a good action movie.

I know a libertarian who hated this film. But once you see “we are not property” (libertarian tears) written on the walls of the wives’ cell, you should be getting hopeful. And once Max and Furiosa fight for the first time, you should be fully absorbed into George Miller’s brain. Do not resist. This movie is so gorgeous that occasional action movie cliches like Furiosa dropping to her knees in the sand in anguish, or the slightly intrusive non-diegetic music feel more frustrating than they would be in an inferior movie. 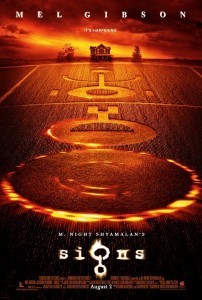 Honestly, this film, plus Fury Road, plus Miracle Mile are on my short list of “I do not give a shit if it doesn’t make sense.” And they all involve at least the threat of world ending. Fury Road works becomes of pure audacity and seriousness in the face of absurdity. Miracle Mile is a nightmare, in logic and in pacing, and in ever-growing surrealism. But to me, Signs has always been too scary to mock. It may not be your nightmare, but it is one of mine.

I was 15 when I saw it in the theater with a group of friends. It was quite simply one of those great theater-going moments, where the place buzzes with energy but without distraction or loud noises getting in the way of the enjoyment of the movie (or enhancing the enjoyment, like when the most Canadian man in the world yelled “GET ‘ER PHOONE NUMBER!” at the screen when Mark Wahlberg kissed Helena Bonham Apewoman in Planet of the Apes). Well, quiet except for that moment when Joaquin Phoenix’s character is watching the footage from the children’s birthday party in which something very scary happens. Phoenix’s character shrieks, I shrieked out loud in the crowded theater. Now, I couldn’t sleep for three days after seeing this movie (shut up, my parents live near a cornfield in Pennsylvania), but it was worth it in the end.

It’s a claustrophobic alien movie that’s funny, terrifying, and slow-building. The acting is fantastic from every single person (remember when Mel Gibson was awesome? I do). Maybe there was fluoride in the water, or some weird mineral. Maybe it’s the pipes! Maybe it’s all a metaphor. Maybe the aliens are demons. It doesn’t matter. The movie justifies its own logical evasions by being awesome and scary. If two or three things came together to save the day, it would be Hollywood bullshit. But in the narrative, the obviousness of the puzzle piece is on purpose. This is a world in which everything came together so that Mel Gibson’s character could save his son. Maybe that’s not our world. That’s okay.

(Honestly, the least credible thing to me is the happy ending. Those children would need MASSIVE therapy. Massive. The adults, too.)