The Most Location Things I Have Ever Done Catholic School vs. Homeschool: A Visual Contrast

Are These Our New Media Choices? 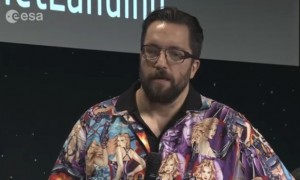 ‘If You Looked at Renee Zellweger’s Plastic Surgery, You Need to See These Photos‘

Mic writer Eileen Shim gives a Renee Zellweger’s face click bait headline, then self-righteously shames you for daring to click on such an inconsequential story. You should care about Kurds fighting, space travel, etc.

You should care more about all those things, that real news, but somehow Shim’s presentation makes me want to go read TMZ like I never have before. Give me good, real news. Find a way for me to want it, if I don’t want it. But do not lecture me about news. And do not sneak it in like a dog owner hides a pill in peanut butter. If I wanted a filibuster about the importance of true journalism, I would watch The Newsroom.

‘I don’t care if you landed a spacecraft on a comet, your shirt is sexist and ostracizing’

Ponderous Verge writer Chris Plante cares not for science. He cares only for the fact that British rocket scientist Matt Taylor wore a garish, goofy “girly” shirt on television while discussing how he was going to (along with other scientists) put a God damned probe on a God damned comet.

Alright, Plante later admitted to being a bit excessive, yet cheered poor Taylor’s apology which came earlier today. Taylor might be a big old softy who was actually wounded at being accused of sexism. Or he was just bummed out that the gnats of the internet managed to swarm around and diminish his bad-ass day of SCIENCE. Certainly he had been experiencing some seriously keyed-up emotions and stress levels for several days. We don’t know exactly why he was so upset. We do know that Plante’s satisfaction was cold and creepy. And his conviction that the apology at least meant something good came of this was asinine. Yes, Taylor was bullied into an apology — that will teach him to never wear a quirky shirt designed by a rockabilly woman ever again. I am sure that means his eyes were opened about sexism.

Dear feminists, I may be more contrarian than average. But I strongly suspect I am not the only person completely repulsed by your petty myopia. I am not of the right, but you’re certainly not making liberalism or feminism anything I wish to be affiliated with.

Cream of the crop is option three:

This Jezebel post was so painfully wrong that a quick scan of the comments shows folks asking “uh, what death threats?” People were rude to the woman who originally expressed disgust over Taylor’s shirt. I especially dislike “kill yourself” as an internet insult — and it seems to be only gaining in popularity. But neither “kill yourself’ or “jump off a cliff” are death threats.

Not to mention, see the headline. See the fact that only the woman’s narrow focus is acceptable. She is allowed to be offended by a shirt, but the men aren’t allowed to be frustrated by the fact that someone is making a big deal out of a clothing choice. It may well be worse to experience sexism than to be accused of being a sexist. Yet, in order to accept that sexism is bad, men (or women) are not obligated to become prostrate at every accusation of it. They are allowed to fight back.

Death threats are garbage. Everyone should calm down about almost everything except the state. But try to actually include death threats in your piece which advertises that they occurred.

There are small issues to talk about in the world. I hate high heels. I wish women wouldn’t change their last names so often. But yet another thing that violates the sanctity of choose my choice feminism is how I wish that women (and their allies) would stop obsessing over and writing about things as small as a goofy shirt. Especially on a site which has expressed teenaged-style fawning over Barack Obama, while failing to mention his unfortunately less cute attributes like killing Pakistani children and spying on the media and public. Can we not go a little bigger than #shirtgate — without turning into the social good preaching of Mic? Can we not ever learn that powerful, arrogant people who feel as if they have a right to our lives are the enemy — not a badly dressed* British rocket scientist?

Or is it all about pageviews? Yeah, it is. Never mind.