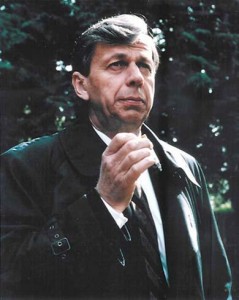 Strangely calm — maybe it was the Canadian accent — and occasionally vulnerable (seemingly) in later seasons, there was something compelling about this guy. We seem him as the top villain for Mulder, but then we see that he is just a part of the much bigger conspiracy. He’s the guy they go to for clean-up and it has cost him a normal human existence. His centric episodes are never dull. (Always wondered why he didn’t just take out Mulder, though.) He smokes not like a villain trying to intimidate someone, but like a man with all the time in the world, who isn’t even thinking about any of it.

Iconic, duh. Think of him in the first movie when he’s the terrifying cyborg, but is beneath Grand Moff Tarkin. And he has that strange commitment to this mysterious religion. We learn more about him. He blows up a whole planet. He can choke people with his hand. He is willing to get into a TIE Fighter and fight — albeit, not very well. And though people usually mock Mark Hamill’s acting when he discovers the terrifying truth about his parentage, well, think how you would feel. Look at Luke Skywalker’s reaction and realize, it’s serious, horrifying stuff to be the son of this man.

3) The Joker (The Dark Knight)

The late Heath Ledger really did deserve those accolades, regardless of their inevitability after his tragic death. Ledger plays the Joker in a transformative, uncomfortable, annoying (those fucking sounds he makes, aaaugh!) disturbing way. It’s such good acting that it’s fun to watch. He’s the best part of the movie, and is on my short list of highly praised things that are not remotely overrated. The greater meaning of the anarchic character isn’t important. Just fucking watch him act.

Not the sadistic King Joffrey? Not the real power, Tywin Lannister? Nope. Give me Cersei, because we see her struggling to be a villain. She’s a woman, she’s maybe not as smart as she thinks she is, but she’s wily enough to fight hard for what she thinks is hers. She’s funny as hell. And she loves her scary-ass son, because he is just about all she has, but she knows he’s sick. She knows how women gain power, but she still yearns to be playing at the big kids table. You see her when her villainous swagger is on, and you see her being completely dismissed by her father and intellectually trailing behind her brother. She’s fascinating. And she has the world’s most flawless bitch face.

Like all good top villains in a dystopia, O’Brien knows all the counter-arguments with which our hero has struggled. He knows them all and can beat them with authority, charm, conviction, and the terrifying certainty of his position. He inflicts the pain, and he is someone to whom Winston Smith can finally speak freely. He knows what he does and he does it because power exists to keep itself alive. No grand motives. Just keeping the system going.

The Operative sees even more clearly than O’Brien does that he does terrible things. But he thinks he is doing them to build something better. Yet, he also thinks there is no place in that world for people like him with so much innocent blood on their hands. He’s the mechanism for improvement at a terrible price, but he has no illusions about being warmly invited into into the new society. Strange character. Very human for a villain, but very frightening.

God damn was he a better monster than a hero. Bland, self-hating (understandable, but still), earnest, when he had a soul, he was playfully sadistic without one. He tortured a woman into insanity, he toyed with a lovesick Giles (best character) after killing his ladyfriend. The contrast between that guy and the guy trying to do right makes even the dull fellow more interesting, just because we know what nastiness is inside of him.

What are some of your favorites, dear readers?