Dave Barry Knows the Secrets to Humanity and Freedom: Hookers and Elvis 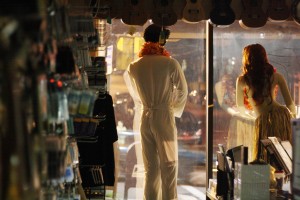 When I was younger I read Dave Barry’s weekly Miami Herald column every week. I remember it resting somewhere in the entertainment section — I think the Sunday section? Maybe Saturday? I don’t know, but I read first, and then comics and the stupid advice columns, then the front page, then the back page of the paper. (Never Sports or Business.)

Regardless of where and when it was, somewhere in those pages of the Pittsburgh Post-Gazette and the Pittsburgh Tribune Review for many years was Barry’s humor column. In it, for 600-odd words, he waxed poetic on the words “booger” or “weasel” and mused about the horrors of toilet snakes, exploding pop tarts, and other things completely up the ally of anyone either 11 or with a particular ease of access to the 11-ness in their souls.

And at some point, once my second generation libertarian brain-washing kicked in and I became one as well (that’s the short version. There were lots of conservative Christian fellow-homeschoolers, then a lot of liberal college professors who helped in the “oh God, not them!” way, as well as a score of different pundits, authors, and thinkers who pointed me in the right direction). And at some point I realized, holy shit, this Barry guy was a libertarian, too! Besides my dad, John Stossel, and my friend Bob who voted for John Kerry the God damned traitor (Bob, not Kerry) in 2004 anyway, who the hell was a libertarian anywhere?

Later still — either online, or more likely in Reason magazine’s compilation Choice — I found the 1994 interview Barry did with Reason. And it was, and remains, fucking amazing.

Within it, Barry talks about minor, but infuriating government money-sucks like the strategic helium reserve. He again mentions the IRS. He describes his generation being “the problem”, thanks to Medicare and Social Security. He has a delightful comment on the absurdity of so-called job creators, and the press who dutifully record that exactly 47 million jobs were created in December. Barry says, “Of all the wonderful things government says, that’s always been just about my favorite. As opposed to if you get to keep the money. Because what you’ll do is go out and bury it in your yard, anything to prevent that money from creating jobs.” And by saying that he — a humorist — demonstrated a better understanding of economics than half the “economists” alive and making money from their dismal grasp of the dismal science.

Most daring and subversive when combined with that economic good sense, he says this:

After a while, the way this country deals with drugs is just not funny. What a waste of everyone’ s time and effort. What a waste of a lot of people’s lives. The way we deal with drugs and sex. I saw one of these real-life cop drama shows, and they mounted a camera in this undercover agent’s pick-up truck, right under the gear shift, and they sent him out to pick up prostitutes.

So the whole show consisted of this guy, who’s quite a good actor, driving to this one street, and young prostitutes come up to him and solicit him. He says OK. They get in. They’re trying real hard to be nice. He’s going to pay $23, that’s all he’s got and they said that’s OK. Meanwhile, behind him the other cops, these fat men with walkie-talkies, are laughing and chuckling because here they are about to enforce the law and protect society. They take her to some street and then of course they come up and arrest her. This poor woman–I don’t know whether she’s feeding her drug habit or feeding her kids or whatever. And the cops are so proud of themselves, these big strapping guys.

It just made me sick to see this. To treat these people who are trying to make a living, one way or another, this way, and to be proud of it. It’s on television and we’re all supposed to watch this and feel good about it. It’s just disgusting.

The anti-drug war stuff is a libertarian favorite for good reason. But the prostitution part is what gets me me here. Barry watched this show — COPS, or whatever — and he didn’t root for the the “good guy.” He didn’t cheer them on as they tackled some poor, shirtless buffoon or invited the audience to gawk at some pathetic, screaming loony. He didn’t laugh and cringe at some dumb crackwhore, the way most people would in private and in media. Barry’s sympathies were in the right place, and so was his condemnation.

The woman was trying to make money — maybe not in a good way, maybe not for good reasons, we don’t know. And we don’t need to know. We just need to know the real question: Why the hell is someone getting paid to hurt this woman? To jail her and definitely to shame her? Why are the people paid for by tax dollars, imbued with the use of legal, lethal force, and given great respect in society spending that time and respect and money on fucking over this woman who is trying to make a little money and nothing else?

And that humanity brings us to the other Dave Barry secret of humanity. We see that Barry knows freedom. He knows the stupidity and waste of government bureaucracy. He even knows the cruelty of which police officers are capable. But with his essay on crazy Elvis fans, Barry also demonstrates that even without the “coercion or not” question, he is smart enough to rise above the obvious knocking down of people who seem to be “asking for it” when they dare to not confirm to cool. Like Jon Ronson with his sympathetic, but not endorsing wild ride through the world of weirdos, Them: Adventures with Extremists, Barry didn’t want to sit back and crack wise and broad about the crazy Elvis fans. He doesn’t want to shoot polyester-clad fish swimming in a lard barrel. Those fish never hurt anyone.

So he wrote “Hearts that are True.” (To be found in Dave Barry is Not Making This Up).

The way he tells it in the italics before the essay, he really was all set to write some obvious jokes about fat Southern housewives who can’t untwist their Granny panties over Elvis long enough to realize he’s dead and buried. (And before that he was bloated, drug-addled, and seeping talent from every sequined pore.) But Barry looked closer and he saw the people who cared so much that it hurt, about this dead musician. Intrigued and puzzled, he set out to find the why.

And — spoiler alert — he doesn’t really discover anything, except maybe a little reminder that there are a lot of good Elvis tunes. But God is it a killer journey — to Graceland, and to Elvis’s boyhood home, and to lots of friendly, kind folks, to find that unanswer. Barry is subtle and sad and sweet in his writing and it’s just the loveliest thing, this essay. I’ve read it three or four times, but I try to save it up so it doesn’t lose its punch.

That’s what it is. It’s like a really great song you can’t waste. And you can’t say that about a whole lot of simple, on the page writing, especially not the personal-essay-ish stuff.*

Barry is a humorist. I will always fancy his investigations into UFOs and lawnmower races. Hell, his description of Florida could be why I have never been there or wanted to go. But the Barry of “Hearts That are True” is one I want to spend a little more time with, one I wish we had a few more essays by. I’m envious of that piece. If I had made it, I could be satisfied for at least a little while as a writer.

Do you see what I mean? Why I tie that Reason interview — especially the excerpt above — together with the crazy Elvis fans essay?  Why no matter what else Barry wrote, before or since, even if it didn’t strike the same note in my guts, he will always get me on this one? That I will always feel like he understands something that most people never will?

There’s plenty of room for mocking. Even mocking of people who haven’t performed the sort of life-ruining an IRS agent or a cop has done. Mock reality show stars, or members of Nickelback and I am not necessarily going to be outraged on their behalf. It’s fun to scoff and play High Fidelity-snob or culture warrior about things you think are childish, or stupid, or lacking talent. And it’s easy. It’s so fucking easy.

Yet Barry, the humorist who knows economics better than economists, didn’t take the asked-for punch line. He looked at sad, moaning, obsessive people in the South and said hey, why the hell do they care so much about sad, dead Elvis?

And the end result breaks my damn heart every time.

Dave Barry knows how we should treat each other. He knows whose backs we should have: the drug users, the hookers, and the guys crankily doing their taxes each April — and the people who just fell in love with a Tennessean and never would let death get in the way of a relationship like that.

And, since he’s not soft or meek, Barry also knows who deserve to be ashamed: the politicians, the taxman, and the police with nothing better to do.

Can’t they just listen to a fucking Elvis song or something?

*(Mike Riggs’ Awl essay about suicide is up there, the bastard.)