For The Love of God, Shut Up 2: A Charlie Parr Show 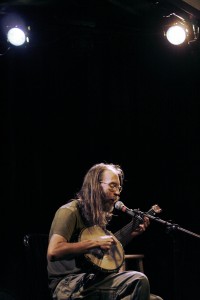 While watching Charlie Parr play a show on Wednesday night, I tried to count the number of people at Club Cafe. If there were 40, including bartenders, and only two of them wouldn’t stop talking, I estimated that humanity is doing pretty well. Hell, the bartender/waiters didn’t even pester during the show. For a darkened-corner, tiny, dark, acoustic venue, the level of silence was pretty damn impressive. That, sadly, made the two girls in the back and their constant buzz of conversation a lot easier to hear, and to think homicidal thoughts about.

This is not to say that the show was so dull I resorted to counting tables and then multiplying. Charlie Parr gives you a hell of a show, especially for someone armed only with guitar and occasional banjo. And the Club Cafe dug him. I haven’t seen such enthusiastic applause in a while. As my mother says, there is something awful and off about many Pittsburgh crowds. The one at X was nearly asleep. They’re too cool to clap, and too cool to shut up. At X, I never in my life had to work so hard to encore a band. And this is a punk band, people!

Ohio blues singer Roger Hoover opened, with his wife providing some strong harmonies. Hoover wasn’t as special as Parr is, but still had a lot more heart than your average white dude with acoustic guitar. He played a song about his uncle being caught in the perfect storm, which was pretty epic. Either that or my friend hadn’t yet appeared, and I was sipping the nostalgia-fuel that is Bell’s Two-Hearted Ale for the first time since halcyon Reason magazine days. But Hoover also noted that someone said the blue are inoculation against greater sadness. I dig that. And I dig that beer. And I do like the blues.

Friend R.F. showed up a little into Parr’s set. Parr has great, sophisticated blues guitar. There’s some Doc Watson elements there, but he doesn’t sing friendly like Doc often did. Parr is more huuguh, in the guts thing. His voice actually sounds more powerful and more beautiful live than it does on record. Like Willie Watson, the only other person I have seen at Club Cage, Parr can fill the room with just himself. That is a rarity. And the enthusiastic crowd response was a constant surprise, not because it wasn’t earned, but because, again, Pittsburgh.

Parr is scruffy and uncomfortable looking, with a longish beard and balding head. He dropped out of highschool in the 1980s, but he looks older than that. He’s pathologically deadpan in his delivery of in between song banter. The crowd really enjoyed his depressingly hilarious dead cat story. He never smiles.

He’s not dour, though. Now, listening to Charlie Parr on the bus has diminishing returns — not unlike Greyhound buses themselves. At first it goes with the scenery, but if you fall asleep and wake up to something called “Hogkill Blues” (which Parr played — it’s a union tale) the ache can become too much. (Old Crow Medicine Show’s Tennessee Pusher album as 4 a.m. in Baltimore soundtrack has similar problems.) But seeing him demonstrated why it’s worth it to go see someone live. They’re, you know, live. A-live.

Anyway. I can never quite be an atheist because the two girls with their endless crawl of conversation decided to take what I assume to be a smoke break right before Parr played “1922 Blues.” Judging by crowd response and Spotify listens, that’s his number one hit. It’s a good one.

On the other hand, I am merely an agnostic because the crowd wasn’t as interested in my second favorite tune, “Bonneville” from the same album. This heralded the return of the chatty twins. I had hoped they were just that bored and left.

Parr played a version of the murder ballad known sometimes as “Delia’s Gone.” He, as I had hoped, also played “Ain’t No Grave Gonna Hold my Body Down” as his final song before encore. He did it a cappella, which was gorgeous and powerful enough to shut up the whole cafe.

Some people might be bored by this sort of show*, but besides bringing up a pleasantly archaic shadowy corners of cafes singing the blues thing, it was also just good. Undeniable guitar, and Americana as filtered through a Minnesota man and his beard. Anybody can plug in and break enough eardrums to get folks’ attention. Doing it with just one instrument and just one man remains a particularly impressive type of incantation.

It was kind of like this, but also different.

*These people are wrong.