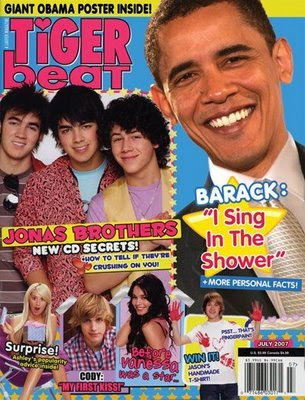 There are many, many, many reasons to hate on Gawker, but somehow Jezebel always manages to do a hell of a lot worse than its older sibling, even in political matters. Gawker is left, it hates on libertarians (or rather, conservatives, objectivists, and libertarians, being unable to tell them apart), and it, in Daily Show style, hates a lot harder on the dumbest critics of Obama and co than the ones with actual power.

And yet, Gawker is never quite this bad.

Penabler  an hour ago OH GOD HE STILL LOVES US, EVEN WITH ALL OUR SHIT. America seriously doesn’t deserve this guy. We are so awful.

crazyshapedlady and 1 more I know I get really ashamed of America sometimes..

LittleFlower This scene is so beautiful for exactly that reason… you’d think he’d be completely worn out by now, but that’s a look of pride on his face. He’s soaking it all in, and he looks happy and grateful and humble. God, I love that man. Not even an American, over here. I just love that whole family so much; I’m so relieved he’s getting another 4 years. I hope there’s less opposition to change, this time, but maybe that’s naive of me? Fuckit, I’m happier when I’m naive. *La la laaaa hearts and flowers*

AshleyAutumn I have this in .gif format and it made me weepy when I saw it, so I saved it.

badmutha 1 of 5 replies @Penabler It is funny that you write this because when I read FB and other sites, and read all the awful things the red necks and others say about him, it just breaks my heart. Even with all our shit, he wants to be our President.

Penabler1 reply @badmuthaan hour ago Its super silly, but I love the Obamas, Clintons, and Biden with the manic intensity that a 13 year old has for Justin Bieber. I really hate all the crap we give him collectively as a country.