Lucy Steigerwald at Antiwar.com: ‘The War on Drugs Remains Literal’ Check Out My Coffee’d-Up Ranting at Liberty.me!

How Many of Esquire‘s Manly Life Accomplishments From Their April Issue Have I Achieved? 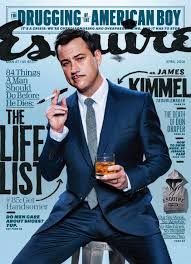 The rule about Esquire is the issues with men on the cover are better. Esquire on masculinity is pretentious, but strangely earnest, but also sort of vulnerable at the end of it all. They’re over-thinking manliness, but it’s better than when they get into sonnets on the symmetry of Megan Fox’s face. Esquire on women is dressed-up lad magazine atittude. It’s all about looks, but Esquire swears it’s because these B-list actresses are just so captivating, man. The way they eat their salad in the cafe in which the interview takes place is totally art. Like, sexiness is art. This actress who played minor parts on several network TV shows is like a canvas.

The April issue of the magazine — starring Jimmy Kimmel with a sharpie mustache drawn on his face — has an intriguing list, “84 Things a Man Should Do Before He Dies: The Life List.” I figured as a well-dressed, well-fed, well-read, not super tough, but working on it real human lady being, I would see how many manly things I have done so far.

1. Apologize.  Should work on my skills there. But boring.

4. Take one stunning train trip. The more nights, the better. Done! And awesome.

6. Spend an uncomfortable amount of money on a really good suit. I haven’t. But I would.

7. Leave a tip big enough to upset you. I am poor and nice, so yes.

8. No, I have never been to Bonneville Salt Flats, but it sounds great. Possibly even greater than this Charlie Parr song called “Bonneville.”

10. Nearly die, then don’t. I almost died from asthma and pneumonia as a six-month-old, so sure.

11. See a band’s last show ever. Not yet, hopefully. I did see the very last Old Crow Medicine Show concert that Willie Watson played with them, however. Tears. Unmanly tears.

14. Volunteer. Obligatory entry, and not as much as I should. I should do some Food, Not Bombs. I did pass out Christmas toys in Zagreb once, on the other hand.

15. No, I haven’t taken a tiny sea plane in Vancouver. That sounds like something I would be terrified and delighted to do.

16. Love something other than yourself (with picture of dog). Well, of course.

17. Shoot a Glock. No! But I have shot a Colt .45 and a dang semi-automatic SKS. I think I have more man points than John H. Richardson, who wrote the brief.

18. Write a poem. Fuck yeah, man. I once earned $50 from a poem, which probably puts me in the top three most successful poets of our time.

22. No, I do not make incredibly important decisions quickly. Nor do I make inane ones. It is not in my genes.

24. Vacations with friends are good, annual ones would be great.

25. I have better than a personal uniform. I have style.

26. I cannot tell a joke. But I will keep telling the one I made up. What do you call a frat boy who enjoys making up new words by putting two together?

27. I haven’t met a lot of newborns, and I haven’t yet held their hands.

28. I have been lost, both on purpose and by accident.

29. No, I cannot change a tire. Have definitely never done it without telling someone.

31. Write a country song? Ah, fuck you, Esquire. Stop trying to win my heart. Joke ones, sure.

32.  Build an irresponsible fire. I was with some disreputable 25-year-old punks, and I was 17, but we did have a trespassing bonfire on a muddy night in God Knows Where Woods.

33. Shovel soil onto a casket. Oh, Jesus, Esquire. It will happen, do we need to put on the official list?

34. Take a month off? Not really on purpose.

35. Face your own mortality by taking a physical risk. I have climbed some Montana boulders and hills that were not so safe, and I was not so skillful.

37. Walk somewhere at least 50 miles away. This has long been on my list. It has to be if you grew up on a diet of children’s books filled with runaway orphans and stranded Alaskan travelers.

38. No, I haven’t been to or climbed Angels Landing in Zion National Park. Sounds Biblical.

39. Drive a Glacier National Park road! Shit, who in Esquire loves Montana this much? Tragically, I haven’t been to Glacier yet.

40.  Hondle. A word I have never heard in my life. It means haggle, basically. I am so bad at haggling that when I saw a $100,000 Reichmark bill for sale at a flea market, I said “I WANT THAT NOW, NO HAGGLING, NOW. TAKE MY MONEY.”

42. Kill your dinner. Not even been fishing. Feel like I should, though.

43. Put your phone down. People always call when you do that. But I love to ignore my phone as much as possible.

45. Make enemies. Working on it, darling. And all the right ones.

47. Sleep outside, in a public park. Not yet. Not even after reading Evasion.

48. Try really fucking hard to be great at one thing. I should try a lot harder.

49. Help to bring life into the world. No thanks. But I would like a puppy. Or to make one in a lab.

52. Live your nightmare. Non-specific, but the piece is about dying at a comedy club. No, thank you.

53. I can’t make an old-fashioned, but the last one I had was made by a Southerner who is a foreign correspondent in Haiti. I cam eto his party clutching my Christmas Rye, and he made me one old-fashioned out of the last dregs of it. It was delicious.

54. Never rode a horse. Mom says I rode an elephant in LA once. It was probably well-tethered.

56. Make a sandwich at three in the morning. This is just an excuse to show Jessica Pare in her underwear. On the other hand, she has a friendly pin-up girl smile and is not posing in an impossible way, and for a man magazine, that is true enlightenment.

58. I have never busked! Which is part of my sneaking suspicion that I will never be great. Wait, once I was sitting on the sidewalk for my mom and I began fiddling with my viola, because this was after junior orchestra. One of the directors throw a quarter into my case, so there you go.

59-60. Meet your hero/have a hero. I have met several of mine, musical, ideological, journalistic, and otherwise.

61. No, I have never been to that specific place either.

62. Walk away from a conversation you’re not enjoying, without explanation. Yes. It’s hard for the shy, but it’s good practice for the woman getting creeped on at a Justin Townes Earle show.

63. Get fired, with cause. I was much better at that work study in the ELS office at Chatham than the one girl. But dammit, last hired, first fired. She slept at her desk, man!

66. No, my left hand is rubbish. I am way far from ambidextrous.

70. I still laugh at Cookie Monster, and the lesson from Sesame Street I learn is that eating inanimate objects with glee is hilarious. Enthusiasm. Let’s say I learned enthusiasm.

71. I would be glad to attend the launch of a rocket.

72. Be a true believer, then believe in the opposite side of the thing. Unless I become a fundamentalist or a fascist, seems unlikely to happen.

73. I like LA, and I have always wondered about chicken and waffles, so okay, maybe that one. I will visit that restaurant.

74. Walk around New York City all night. I thought not, but actually Pamela Stubbart, Todd Seavey and I just made it to dawn in January, 2013. Bam!

77. Read Huckleberry Finn. I was literally just thinking today I should do this.

79. Do something awesome and not get paid for it. Sorry, “refuse to monetize it.” This blog post counts.

80. Have a pair of shoes made. I should, because my leg is all fucked up. Do $700 orthopedic insoles count?

82. I could definitely lose at running for office, but it seems unlikely I will ever bother.

83. I would like to go to Detroit for journalistic reasons, but, uh, it’s a little weird that Esquire thinks you can do most of the things on this list with impunity there.

84. Don’t have a life list. Edgy. Manly and edgy twist there.

Sadly, there is no way to tally your man score at the end. The magazine that published “The Falling Man” and “Frank Sinatra Has a Cold” would never be so quantitatively lowbrow, so unliterary, man.

I haven’t ever seen a Cosmo, etc. version of this list, but I suspect it would be 1) have a sweet boyfriend/have kids or don’t, but decide!!! 2) buy clothing that makes you feel good (hint: this thing from our advertisers), 3) A wild stab at topical feminism with “uh, ask for a raise, I guess.”

Esquire‘s life list is both a demonstration of its conventions, and better than it might be, all things considered, and much better than any general interest magazine for ladies. In short, Esquire-y.