I Read the February Esquire, So You Don’t — Oh, Do What You Want 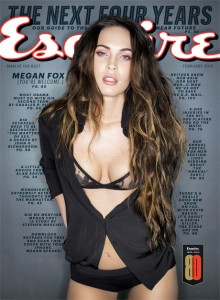 Esquire, oh Esquire. You’re the confederate vampire character Jasper in Twilight — compared to  the other characters/magazines (Bella/Cosmo), you are the weightiest, most literary thing.  But there you are, somehow still being terrible and shallow. You’re always there, a reminder of how bad you are, but don’t have to be, but how much better you are than things that are worse.

But first, a list. Cosmo and associated lady magazines think that women are interested in sex, men, make-up, clothes, things that will kill you, and not much else. Esquire, according to their February issue, believes that you, a Man, are interested in the following things:

Megan Fox’s weirdness and her hotness and her sadness (more on that later), Barack Obama’s second term, how the Post Office is the Best Thing in the World and is Also America, Everyone Should Calm Down About Sex Scandals, head injuries in the NFL,  Kevin Bacon wearing a 5,000 dollar suit, Alan Arkin’s life advice, how to make mushroom gravy for your steak, various sexual things, short stories, poetry — one poem is even by a lady, alcohol, which smartphones have the best cameras, the war in Afghanistan, jokes told by scantily clad women, clothing, the World Trade Center, Chris Christie.

Yes, they are selling you lots of shit, same as lady magazines do, but nobody who has given even a cursory glance at both general interest men magazines and lady ones could ever argue against this summary; that men’s magazines, even the most shallow ones, suggest a lot wider, and meatier range of interests than any women’s ones (even more than, say, Bust, which is just a little too into knitting and shit). You, a Man, have a lot of interests. Sexy ladies are just one of them. Sexy ladies are interested in their looks and in men, men are interested in doing things and thinking things and, yes, getting sexy women. This is not new. This is still frustrating.

Thankfully, Esquire also has some really solid examples of appalling sentences and paragraphs. Their fault, intriguingly (again, when contrasted with Cosmo, which is written at probably a fifth grade reading level) is most often that they are pretentious.  And so, presenting the top five most awful piece of writing in the February Esquire —

1) No reaction to the cover profile of Megan Fox could beat Caity Weaver’s blog for Gawker. Her headline, “Megan Fox Speaks in Tongues and is Symmetrical” is an impressively accurate summary of the content. Weaver’s takeaway, that Fox alludes to a lot of weird, fascinating beliefs, mentioning Pentecostal church, leprechauns  aliens —  but the writer — Stephan Marche — is much more interested in her face, is correct. The worst part of Marche’s writing (read it out loud in the most theatrical tone possible):

The symmetry of her face, up close, is genuinely shocking. The lip on the left curves exactly the same way as the lip on the right. The eyes match exactly. The brow is in perfect balance, like a problem of logic, like a visual labyrinth. It’s not really even that beautiful. It’s closer to the sublime, a force of nature, the patterns of waves crisscrossing a lake, snow avalanching down the side of a mountain, an elaborately camouflaged butterfly. What she is is flawless. There is absolutely nothing wrong with her.

As previously noted by The Awl and Jezebel. Marche also calls Amy Adams and Adele and Lady Gaga “perfectly plain.” This is obviously ridiculous. But says Marche, they are basically signs that ugly women have been okayed by society now. That leads him to his thesis — not that Fox believes weird shit and hates her body being used as dissected and that could be interesting, np — that it’s hard out there fore the symmetrical-faced.

Marche also has to put “I” in his lede. Every single profile of a sexy celebrity needs to start with the author sitting next to or across from their subject. It’s very important. It’s key. I am there, the sexy celebrity is there, look how she eats food, how she curls up her feet onto the sofa, look at her.

(All of this makes me realize how God damned good that New York Times Magazine article about Lindsay Lohan actually was.)

2) I am not reading your article about Barack Obama, Charlies Pierce. You are boring. Okay, fine, here’s something:

“The personal victory he won over most of the things that are cheap and lazy and stupid in our politics has given him the power to disenthrall the public from those same things, and to disenthrall his own administration from its notion that there was some good to be found in the people who so fastened themselves to the cheap and the lazy and the stupid, and that there was some patriotism to be found in the politicians who so profited from them. In his second term, it should be Barack Obama’s job to make that personal victory ours as well.”

3) “This isn’t a story about whether we could live without the post office. It’s about whether we’d want to.” Gawker, my God, your talents could be so great mocking this ode to American postal greatness, if only Hamilton Nolan wasn’t a God damned commie he could skewer this absurity so well.

The name Lysander Spooner sure never shows up in this piece. Nor is a query that maybe private folks could do this easier ever answered. It just hangs there for a paragraph. There is just a worried collection of numbers about privatization — we have 110,000 military contractors, private companies house 16 percent of federal inmates — that have nothing to say about efficiency or morality or public versus private. The person who wrote this piece had better be 150 years old, or we are doomed.

4) “He was the Martyred Jesus of Oral Sex with Interns…” No. Fuck you. Stop it. Your writing makes my my teeth itch. And if you’re pleading for a less puritanical America (fair enough!) do not include Eliot Spitzer in your list of fallen, free love heroes. You get to go to prostitutes, or you get to use your powers as attorney general to crack down on sex workers. You do not get to do both and not be awful. (Though, of course, cracking down on prostitution is gross either way. ) Author, your good points are buried under my urge to punch you.

5) Turns out everything else is tolerable. Tom Junod wrote about head injuries in the NFL, and Junod is overrated, but also not so bad. However, I already read about concussions in sports in Rolling Stone, and I cannot read two articles about sports in one day.  Pleasantly enough, many of asides and briefs are even funny. Something about this issue is slightly more charming than usual, but only the bits and pieces — which, as I know from Reason days, take plenty of time to ensemble, too.

And three out of nine poems aren’t bad — that’s a whole lot better than The New Yorker does.

The laundry list of wide, interesting subjects, the occasional humor, the excessive need to be literary about everything (calm down, we know you published Salinger, you don’t need to get so swoony about Morena Baccarin)… Esquire, you try. I want to like you more than I do, every damn time. This is why you’re are on my love/hate list. I want to write for you, but you piss me off at least half the time. You’re like the Red Eye of magazines, but with much, much worse politics. And yet, every time I start to rant about you, Esquire, I get even more depressed that women’s magazines aren’t even close to being as good as you.