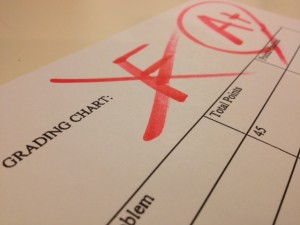 Government grades itself
Via mindthesciencegap.org

We have a long way to go before we get to Libertopia, much less Anarchocapitalistan. Even some kind of “good conservative” (if they still have those) nation where the federal fat is mightily trimmed seems impossibly distant on most days. But there has got to be somewhere we can start in building accountability, accessibility — something besides the same people becoming elected year after year and doing whatever they want with everyone else’s life, time, and money.

In the spirit of pessimism, here are two suggestions for the lowest possible standards in government that would be terrific if actually applied. Please offer your own suggestions in the comments for similar can’t we at least do that while we oppress everyone? (And no, we can’t.)

Speaking of Obamacare — as we have been these last few weeks of government shutdown — remember way back in 2009-2010 when the bill’s circa 2400-page length was one of the Republicans’ many sticking points? Well, that was a pretty fair point, regardless of shady motivations or GOP hypocrisy. Think carefully about the privileges granted to elected officials in Congress — they are permitted to vote on a document nearly two times as long as the entire Lord of the Ring without reading it. And that bill is supposed to become a law that affects potentially everyone in the country — or people in other countries, depending. Is it so much to ask that it be read by everyone who will vote on it? (Yes, yes it is too much.)

The PATRIOT Act was rammed through a cowed and anthrax-fearing Congress in October of 2001. It was a relatively slim 242 pages in length. Yet it was so colossally serious a subject that it warranted more debate than the everyday farm subsidy bullshit, not less. Certainly more than 72 hours of it. Certainly politicians should have been given any and all opportunity to at least not bother to read PATRIOT.

The average bill length is a measly 15 pages, but spending bills and others run much longer. Too bad. Too bad if you want to attach a million riders. You have to read the entire thing — and you have to be given time to do so.  Everyone had a good laugh over Herman Cain’s attempt at the 2012 Republican nomination, but his vow to veto any bill over three pages was brilliant.

Even better, my boyfriend offered the suggestion that the Congressional researchers could make a quiz about the bill’s contents — if your legislative official scores a B or higher, they may vote. And if that worries you idealists, take comfort in the barely-over-a-page 2001 Authorization for Use of Military Force. After all, it’s not the size of the bill that matters, it’s the amount of power carelessly granted within.

On to number two on the bare minimum standards for officials. Not to sound like a certain breed of tiresome paleolibertarian who swears that every single libertarian employed inside the DC city limits is constantly hobnobbing at cocktail parties with elected officials, but really, the least we can ask of politicians is that once they are out of office we stop respecting them so much. Not saying we need to prosecute them for war crimes, or economic ruin, or 2 million people in jail. How about we just start with maybe stop giving them respect for the rest of their lives once they end their own particular brand of horror.

Henry Kissinger, LBJ, Ronald Reagan, George W. Bush, Dick Cheney, anybody in charge of a big war, or a disastrous domestic policy, or any fuck-up that took lives, fortunes, and freedoms gets to finish their term. And then they they get to fuck right off. No more pension, no more Secret Service protection, no more respectful titles, and yes, no more God-damned swanky parties for you. And no more turning to you for seasoned advice for the next big, bad idea.

We don’t do prosecution; we don’t do historical black marks even if you nuked two cities, locked up 100,000 citizens without charge, or militarized the war on drugs. Can we at least socially shun the people who use the suit-and-tie-sociopath’s excuse of “policy” as their reason for treating human beings like puppets? Can we not offer the slightest bit of disincentive for theft, murder, imprisonment ,and massive social engineering? Do we need to keep calling them “public servants,” too?