Pro Publica’s Lame Fracking Journalism Uncle Obama Wants You, You Punks — to Sign Up for ObamaCare

Lucy Steigerwald at Antiwar.com: ‘The Blurred Line Between Cops and Soldiers’ 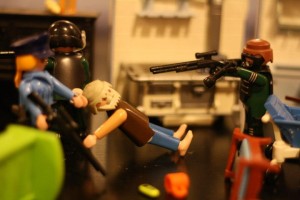 Below is the second edition of “The War at Home” column. I tried to cram in a hasty lesson on the whys and the dangers of the militarized police in America.

Antiwar commenters are often yelling at me for being for open borders or for referring to Chelsea Manning as Chelsea Manning, but they may have a point about my final paragraph being misleading. Noted, commenters. Thanks for the lesson.

(I also should have headlined it “The Blurred Line Between Soldiers and Cops” because that so obviously sounds better. Ugh.)

Nevertheless, do check it out:

In a March 10 USA Today piece, Congressman Hank Johnson (D-GA) expressed his desire to introduce legislation that would place limits on the Pentagon’s 1033 program which is used to supply police departments with gear that was once used on the streets of Afghanistan and Iraq. This is a long overdue “official” recognition that something terrible has happened to police departments in the US. Whether Johnson’s plan has a chance of getting anywhere remains to be seen. Because there are numerous firmly-stuck perverse incentives that lead to the state of policing today and which perpetuate it.

People who casually notice the more military-like qualities of American police would be forgiven for assuming their tactics, weapons, and menacing appearance are a result of post-9/11 fear. Though September 11 and subsequent scares and some real incidents such as the Boston Bombing have aggravated this problem – and there is a similar equipment grant program that comes from the Department of Homeland Security that Rep. Johnson should check on – the catalyst for our mutant police is narcotics prohibition.

Ronald Reagan’s literal drug war began in 1981 with the passage of the Military Cooperation with Civilian Law Enforcement Statute (10 USC 371-380). More loosened restrictions followed that allowed domestic assistance by the military to police in certain (usually drug) cases. It also set up a system where police departments could receive equipment through grants from the federal government. This lead to bizarre commando-style drug raids that sometimes included military helicopters, and even U-2 spy planes. (The flimsy accusation that the Branch Davidian sect had a meth lab was even the excuse for the presence of the Bradley Fighting Vehicles and other military hardware during the disastrous 1993 standoff outside Waco, TX.)

Richard Nixon had declared a “war on drugs” in 1971 and pushed some bad policies – including a DC “no-knock raids” law – with limited success. But the conflict became the monster we see today under Reagan. Those years rocketed the US’s prison population to its current inhumane level of more than 2 million people, and they lead to the normalization of camo-clad cops kicking in doors over reports of weed or other drugs. The spike in crime in the 1990s cemented this supposed need for eternally tough on crime measures from police and politicians. Policies such as mandatory minimum sentences for drug offenders made it clear this was was a serious enough issue to warrant life in prison for repeat, nonviolent drug dealers.