Lucy Steigerwald at Rare: ‘Can We Stop Treating Children Like Criminals?’ 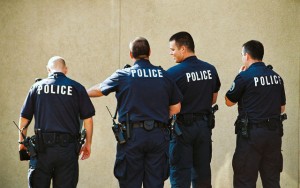 Earlier this month, news that a 9-year-old girl had been handcuffed and arrested for fighting last May in Portland, Oregon broke to much media attention and public outrage.

Portland officers David McCarthy and Matthew Huspek came to the home of Latoya Harris one week after her daughter got into a fight with another girl at the Boys and Girls club they both attended. Both girls were suspended from the club for a week, and the Harris girl apologized.

Everything should have been squared away, except the other girl’s mom called police after she saw her daughter’s bruised cheek. The officers interrogated the girl and since she, according to McCarthy’s report, “gave vague answers” and seemed nervous and cagey, they hauled her in, still clad in a swimsuit damp from her running through the sprinkler. Her mother was not permitted to come along, and it took her an hour to bus to the station and retrieve her child.

Harris says though she complained to various sources, including Portland’s Independent Police Review Division, nothing came of the matter, so she figured public shaming of the officers might do the trick. The reason the police board said there was nothing they could do? No laws were broken.

Portland law allows the handcuffing of suspects for felonies or class A misdemeanors, and fourth degree assault counts as the latter and that was the charge against the young Harris girl. After all that, the DA never charged the girl, and eventually the charges were dropped.

The savvy Ms. Harris was right about the effects of media attention and public outrage. There is now a push to change the law so that suspects in Portland under 10 can’t be taken into custody without a juvenile court order, among other small changes. This is good, but it it doesn’t change the fundamental absurdity of treating childish bad behavior like a criminal matter.

Nor does it change the fact that neither the local DA, the arresting officers, or indeed the mother who made the first frantic complaint used common sense. But American society has normalized the notion of a law and order response to every vice, every nuisance, and every bad behavior. Why should children be exempt?

Turns out they’re not — not even this month: