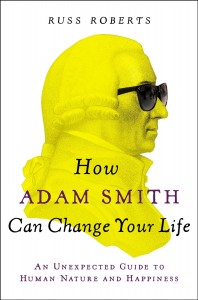 I wrote a review of econ professor Russell Roberts’ newest book, How Adam Smith Can Change Your Life. Check it out over at the Post-Gazette’s website:

A few years back, Russ Roberts, a research fellow at Stanford’s Hoover Institution, co-produced a viral video which portrayed a rap battle between economists John Maynard Keynes and F.A. Hayek.

It’s an amazingly well-crafted seven and a half minutes. Getting your economic knowledge from it is rather like getting advice on moral philosophy from the man who understood how nations get rich more than anyone else — that is, surprisingly effective.

Poor Adam Smith is known mostly for “The Wealth of Nations.” It’s a classic, albeit one that today is mostly written about, rather than read. Smith’s other work published in his lifetime was “The Theory of Moral Sentiments.” It has been ignored. Even Mr. Roberts notes that he took years and years to tackle it, due to its 18th-century style and its seemingly irrelevant subject matter. What would Mr. Invisible Hand have to say about how human beings should live anyway? Shouldn’t he stick with detailing the specialization of the butcher and the baker? No.

While we’re here, you might as well watch this again: