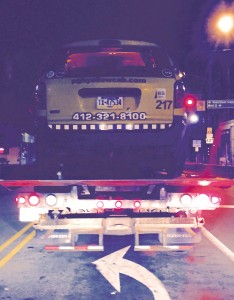 I never get tired of running my favorite photo — a dead Pittsburgh Yellow Cab being hauled away on a flat bed, taken while I was Ubering.

It’s now my lot in life, as a good libertarian who as a working journalist tried his best to bring an end to the Yellow Cab racket in Pittsburgh, to stick up for Uber whenever I get the chance.

It’d be nice if Uber’s bad boy CEO Travis Kalanick would hire me so I could get paid for my pleasure, but that doesn’t look like it’s going to happen.

Uber has succeeded and will grow exponentially because of one simple reason – consumers love it. Uber has ended 80 years of consumer abuse by monopoly cabs and their political patrons in cities. That racket has been blown up forever and society is better off in numerous ways. From now on no politician who ever hopes to get re elected can come out against uber for long. The people who’ve suffered from taxi cab abuse for so long — while the local media didn’t notice or care and public officials said nothing – are voting by the millions with their uber apps every day. I’m an uber driver in Pittsburgh with 1700 trips and 3000 total riders siince January. As far as I can tell — and I “interview” my passengers like the ex-journalist I am — only a handful of those 1700 riders will ever consider using yellow cab again. Uber is micro transit at its best and it’s changing the way young people are moving around the city. Smart democrat mayors like Pittsburgh’s Bill Peduto know it’s great for their city and their poor and rich constituents and it is.

By the way, the Boston Globe reported that Uber drivers carried two million passengers just last month. That’s about 100 riders per each of 20,000 drivers. Their average wait time was under five minutes and as far as I know, not a single rider was robbed, murdered or raped.