Unfortunately, This Guardian Piece is Not About School Shootings Hysteria Another Edition of Salon Contributor in Praise Me, I Am No Longer a Libertarian

Saturday Six: Defending the Pop Culture Undefendable Or, Everyone Shut Up About Everything 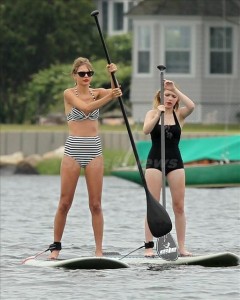 Maybe I just want to hang out with her and Tavi Gevinson. Is that so wrong? Is it?

6) Hats, specifically fedoras, are not some signal that the wearer is a mouth-breathing creeper (creepertarian is some circles) whom you can instantly dismiss. You’re thinking of trillbys. And honestly, shut up about both. Fashion — especially the male variety — is dull enough already without all of your judgement, people.

(Let’s bring suspenders back, though. I’m on that, but nobody else seems to be.)

5) Taylor Swift, whom I enjoy in small doses on occasion, is not particularly anti-feminist. Some critiques are fair, like the point I saw somewhere that Swift is the beautiful, rich insider who has a bad habit of playing the aggrieved ugly duckling even now,  but some (looking at you, Jezebel, back when you thought Lady Gaga was your new artistic God), are way too prude-shaming, romantic-shaming, in my day we smoked clove cigarettes and used boys before they used us and we never, ever fawned ever bullshit. Other people are different, Jezebel. Nobody knows how contrived Taylor Swift is as compared to any other famous woman, but some people are less comfortable with meat dresses or leotards than others.

(I also dig this New York Magazine piece that notes that Swift is a woman, but she’s making 12-year -old girls fawn all over her the way they usually do over boys/non-threatening men. That’s cool. She’s the musician on stage. And since the majority of those girls will grow up to be heterosexual, they maybe want to be her, not dream of dating or marrying her. That’s not bad at all.)

All I ask is for folks to stop using the lyrics to “Fifteen” as proof that Swift is a big old slut-shamer. When she sings “Abigail gave everything she had/to a boy who changed his mind” she may or may not be talking about sex, but she is certainly also talking about feelings and emotions and such. The song also includes the lyrics “I swore someday I was going to marry him/but I realized some bigger dreams of mine” and “In your life, you’ll realize bigger dreams than/dating the boy on the football team/I didn’t know it at 15.” Again, not bad at all. Stop willfully missing the point, snob-feminists. The net lady power gain of Swift is debatable, but that song is not the sign of her and society’s creeping conservatism the way every blog decided it was circa 2010.

Also, at least half of you are lying when you claim never to have felt even a twinge of the sentiments expressed in “You Belong With Me.” Lying. 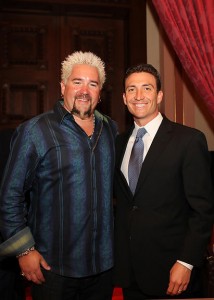 Try to ignore this photo, though.

(I wish he wouldn’t refer to his show as “triple d,” on the other hand. That’s a little nails on the chalkboard.)

3) Neither is Zooey Deschanel the devil. First of all, stop calling every character a manic pixie dream girl, especially “Summer.” Deschanel is doomed to be that, and it’s partially her fault for embracing a certain type of wide-eyed, childish, vintage-clad, sparkle and cupcake-loving character But she’s more than that, by virtue of being an actual breathing human.  And like Taylor Swift, I can’t speak to what aspects of her personality are “real” and which are contrived. But the assumption that no female wants to wear vintage clothing (I do) or be obsessed with cute little cakes (okay, not so much) unless they’re “trying too hard” is tiresome.

And the entire point of 500 Days of Summer, a decent movie, is that it stars an unreliable narrator. That is made abundantly clear to audiences, that Joseph Gordon-Levitt’s character has romanticized the relationship and is constantly projecting things onto Deschanel’s character that are not there. And yet, this movie, which arguably subverted the quirky woman exists for your growing and learning experience, man-boy! trope even before Ruby Sparks did, is tossed into the pile along with much less thoughtful versions of the trope. And Deschanel herself seems pretty solid, especially when she says bad-ass things like ” I want to be a fucking feminist and wear a fucking Peter Pan collar. So fucking what?”  You go, girl.

Also, there are a few decent She and Him songs. And New Girl is sometimes funny.

2) Leave Girls alone, but stop talking about it. Girls is a decent show. It is not nearly as bad or as amazing as people have suggested. It is occasionally funny or poignant, if slow-moving. The self-centered quality of the characters is moderately interesting, especially since they’re females and that is more rare, letting them be this unpleasant. Lena Dunham’s body and her awkward sex scenes are kind of interesting and were a sort of bold idea. (And people being complete assholes about her body kind of proves her point, by the way. So ha.) Everything about the show is pretty okay, if not ever super thrilling or lovable. Now let’s never speak of it or its deeper meanings ever again. 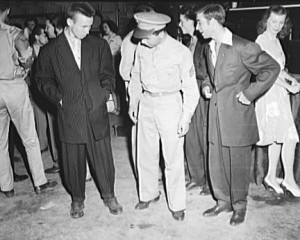 Look at these fucking hipsters.

1) Stop calling everything hipster. It once meant something (like the death of the western world, am I right, Adbusters?!) 1950s and cool. It may have meant something recently (circa 2004, it was the high school students I knew who wore ugly clothes and listened to Mates of State and said things about vinyl that should have been a cliche to any self-aware 17-year-old). It means nothing except “thing I don’t like” now. And those of us who have ever been accused of being one I am sure have our reasons for being annoyed by the slur. I like vintage clothing and old shit of all kinds, so I am under suspicion. And my love of folk, old time, and country is more suspect than it was in 2008. (That’s the trade-off for having a lot more bands to enjoy. I will take it.)

Back in 2009, I dragged my skeptical mother to an Old Crow Medicine Show concert. She had heard some of the band’s earlier music, the sort that sounds bizarrely close to 80-year-old string or jugband music, and thought it was too derivative. Something about it couldn’t be taken seriously. But then she saw them live, chock full of runaway train, punk energy, and her mind was changed. Bandleader Ketch Secor is clearly putting on a show, both in interviews and at concerts. But he clearly has this fondness and fascination with the past performers that translates into a theatrical, but honestly sincere way of writing songs and speaking about music. He knows it’s all a show, but you can’t tell me he doesn’t love this old music to which he’s devoted his life. Nor can you tell me he did that just because it was going to make a killer Oxford American story someday.

While dancing to Pokey LaFarge a few months ago, I noticed the band’s dapper outfits, their ’20s style of music. Is this hipster? I wondered. Indeed, what the hell is that word, except an accusation that someone’s appreciation isn’t sincere? That it is instead a competition for most strange or obscure interest? Is wanting to buy quirky old shit on ebay hipster? Does it matter if my love of old objects — even, say, a hilarious old ad — is not condescending towards the foolishness of days gone by, but based on a breathless thrill that comes from trying to believe in a time for which I wasn’t around? Mom heard the jugband-influenced Old Crow as sort of jokey. I heard it as delightfully alien, and real, and holy shit, once this was what people heard on the radio and played in their kitchens. Ears hear differently.

You don’t know other people’s hearts and minds. So stop crying hipster-wolf and unless there’s proof of otherwise, assume that people love what they love — because they were going to love something — and this is what they picked.