By Joe Steigerwald On September 12, 2013 · In Counterpoint · 3 Comments
Tweet 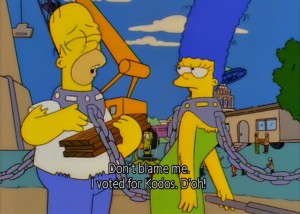 Stupid Point/Counterpoint is a new feature in which Stag Blog columnist Joe Steigerwald counters the worst editorials on the internet with a well-written and thought out rebuttal. Also: mockery and yelling.

AMERICA, did you know there is a shadowy group of extremists whose only goal is bringing about the destruction of the state? This cadre of radicals operates under our very noses, advocating for less government and more personal freedom. If we allow them to succeed they will plunge the country into destruction. They must be eliminated.

I for one thank God that we have Nick Hanauer and Eric Liu to expose these monsters.

Are Libertarians the new Communists? The question, authored by Nick Hanauer and Eric Liu, would appear to have an obvious answer: no. Or, more appropriately: hell no, are you stupid? However, that is only because you have been brainwashed by the massive libertarian juggernaut. They of the 1 percent of the popular vote in the 2012 Presidential election and zero active members in the U.S. government.

The article posits that while communism and extreme libertarianism (a word so unpopular spell check doesn’t even recognize it) appear to be “polar opposites” they are actually “mirror images,” and the adoption of either would result in unchecked human misery, poverty, and tyranny.

I’d like to think (or at least pray) that most people would laugh when they read Hanauer and Liu’s anti-libertarian polemic appearing (ever so appropriately) at Bloomberg.com. I’d love to believe that most rational humans who read the article threw up their hands, closed down their browsers, got back into their beds, and pulled up the covers; vowing never again to leave their house. Those few people who actually finished the article probably fell into one of two camps: enraged libertarians and Michael Bloomberg worshiping authoritarians.

Some articles with terrible headlines actually improve upon close reading. This isn’t one of them. It turns out the title is probably the most well thought-out part of the entire endeavor. It’s completely misleading, but it’s excellent link bait. The headline screams that juicy controversial content is inside — it begs to be clicked and shared– but the article can’t deliver upon that promise. It’s obviously unreasearched, blatantly misleading on every level, and poorly written. The writers have to strain the limits of belief to build their rather shaky case that a country run by “extremist” libertarians would develop the same problems that plague the communist-controlled China, Cuba, and North Korea.

Some, such as the Koch brothers, are economic royalists who repackage trickle-down economics as “libertarian populism.” Some are followers of Texas Senator Ted Cruz, whose highest aspiration is to shut down government. Some resemble the anti-tax activist Grover Norquist, who has made a career out of trying to drown, stifle or strangle government.

Yes, liberty is a core American value, and an overweening state can be unhealthy. And there are plenty of self-described libertarians who have adopted the label mainly because they support same-sex marriage or decry government surveillance. These social libertarians aren’t the problem. It is the nihilist anti-state libertarians of the Koch-Cruz-Norquist-Paul (Ron and Rand alike) school who should worry us.

Liu and Hanauer round up the usual capitalist boogey men: Ayn Rand and her ever-pulsing mass of followers, the “sinister 6,” an evil group of superlibertarians featuring: The Koch brothers, AKA the Kochtopus, Rand “Republican Senator from Tennessee” Paul, Ron “Dr. No” Paul, Grover “The Tax Slayer” Norquist, and Ted “I’m not a libertarian, why am I on this list” Cruz. This band of evil anti-statist extremists want nothing more than to destroy the government and plunge America into anarchy.

Lui and Hanauer make the usual mistake of equating anyone who wants to reduce the size of government (no matter how slight) to extremist libertarians. No self-respecting libertarian (must less a radical extremist) would ever include Rand Paul and Ted Cruz in their secret coven, even if they agree with some of their policies. This is where the authors betray their own statist ideology. Even the smallest notion of shrinking the government sends shockwaves through Lui and Hanauer’s entire being. Their reaction to a tiny faction of dedicated but hopelessly outnumbered ideologues is to go nuclear on an entire ideology. They don’t want to marginalize the radical libertarian movement, they want to annihilate anyone who dares think that government is growing too large. To them this means cobbling together a disparate group of politicians and advocates who loosely share a streak of libertarianism into a shadowy group of “extremists” and “radicals” and slandering the hell out of them.

Lui and Hanauer’s premise — which on its own is ridiculous — is quickly revealed to be merely a hit piece on Republican bigwigs and future presidential candidates  Rand Paul and Ted Cruz are almost a lock to run in 2016, and Grover Norquist and the Koch brothers receive nearly daily slandering from the left.

When you compare an ideology that has produced nearly 100 million victims to one that advocates personal freedom and extremely limited government you should probably introduce some evidence into the equation. Alas, there is little evidence to to be found in the article (though they have plenty of hearsay and conjecture. Which are “kinds of evidence.”)

We say the conditional “would” because radical libertarianism has a fatal flaw: It can’t be applied across a functioning society. What might radical libertarians do if they actually had power? A President Paul would rule by tantrum, shutting down the government in order to repeal laws already passed by Congress. A Secretary Norquist would eliminate the Internal Revenue Service and progressive taxation, so that the already wealthy could exponentially compound their advantage, as the programs that sustain a prosperous middle class are gutted. A Koch domestic policy would obliterate environmental standards for clean air and water, so that polluters could externalize all their costs onto other people.

Radical libertarians would be great at destroying. They would have little concept of creating or governing. It is in failed states such as Somalia that libertarianism finds its fullest actual expression.

First of all it would be very hard for a single, lone libertarian in the halls of Washington D.C. to do anything close to the kinds of things that Lui and Hanauer propose would happen. Apparently they have forgotten about the hundreds of Republicans and Democrats lining the aisles of Congress. Secondly, once again the authors fail to name a single libertarian. Thirdly, saying Somalia is the “fullest actual expression” of libertarianism is represents an alarming lack of knowledge about Somalia, libertarianism, world affairs, politics, war, culture, religion, federalism, constitutional law, economics, capitalism, rational arguments (etc. etc.). It’s a gross misrepresentation of libertarianism, and all too common from the statist left. (For future reference I do recommend at least wikipedia-ing “libertarian” before writing about it. Hint, hint)

Some libertarians will claim we are arguing against a straw man and that no serious adherent to their philosophy advocates the extreme positions we describe. The public record of extreme statements by the likes of Cruz, Norquist and the Pauls speaks for itself.

Citations? References? Links? A link to a Google search of “extreme statements by Ron Paul?” Something/Anything?  When you include “speaks for itself” in an article, it usually means, “I heard Ed Schulz bashing him on TV and it sounded pretty convincing.”

The rest of the article is a wan, inarticulate defense of government:  cooperation! Evolving blends of freedom! True citizenship! Buzzwords written for the Sesame Street crowd. Not even worth a copy and paste.

Even if  libertarianism isn’t your political ideology of choice it’s hard to imagine an article that does less to actually link libertarianism and communism together. If Liu and Hanauer had used the headline “radical libertarianism is bad” no one would have batted an eyelash. Even if they had written a well-reasoned, researched article about how they don’t believe libertarianism can work in this global climate, there would be little outrage. But they misrepresented their entire argument in the title, thus ensuring angry libertarians would comment/tweet/write blog rebuttals (wait a second…) and their article would go viral. However, this fails to identify this article’s raison d’etre: It’s a hit piece on the libertarian(ish) conservatives currently flexing their muscles in the House and Senate. Somehow the article paints the (slight) inclination to (possibly) reduce the size of government as a tenet of radical libertarianism. That’s not radical, that’s not even libertarian. That’s very basic conservative, small government-type views. (If you want radical libertarianism try Sheldon Richman on for size.)

Liu and Hanauer subscribe to the standard liberal trope: government is inherently a good and pure institution. All it takes is tinkering and fine-tuning to make it work. To all problems, the solution: more government. But the moment anyone wants to reduce or streamline the massive government bureaucracy, they are viewed as radicals. Liu and Hanauer’s piece is one published in fear and reaction to a growing  inclination amongst the plebeians that government might be growing too big and too powerful for its (or, rather, our) own good.

But all is not lost. When the radical libertarian Rand Paul is elected President in 2016 we, dedicated soldiers of libertarianism will descend on Liu, Hanauer and their ilk, and send them and all enemies of the revolution to prison camps, where they will starve and die. No wait, that’s communism. I’m sorry, I get them confused sometimes too.