For a special, America-themed Fourth of July show, our cranky, liberty-loving panel discussed nationalism, patriotism, immigration, the Constitution, and what makes America great besides Roland Emmerich and Michael Bay movies.

Five Best Things Related to the Fourth of July, and One Very Depressing Musing 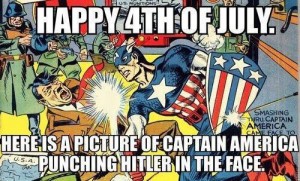 1) Every knee-jerk patriot who so loves his loyalty to flag and country is celebrating treason right now. Yes, treason.

2) The Declaration of Independence is a dynamite piece of work, it really is.

3) Bill Pullman’s presidential speech before the final battle in Independence Day. Tell me he doesn’t give his all.

4) The X version of “Fourth of July”, which I played on my radio show yesterday afternoon. It’s such a gut-wrencher in many different ways. What a ridiculously great song. In order of quality of versions it goes 1) X 2) Drunk Matt Welch 3) Dave Alvin, for what that’s worth.

5) Maybe the bad-ass words of the Founders have melted into offensive hypocrisy, perhaps they did right away (or by the time John Adams rolled into office with his Sedition Act shenanigans), but again, that Deceleration is a kick-ass “fuck you” to people getting involved your business of living.

Hell, the World War I Christmas Truce failed, but I still think about and toast it every December 24. Maybe I could celebrate, if nothing else, the sheer audacity of people throwing off their King and saying, nah, we can do better. Henry David Thoreau wasn’t the perfect American woodsman, but his Civil Disobedience does the poetry of liberty better than anything. There’s a place for the pretty words of even the Founders. They knew. They knew so well the dangers of government tyranny and they still were all awful presidents — thereby proving their warnings that it’s the power that’s the problem.

6) Yes, six. I think under my libertarian anarchism there is some stupid, poetic core that wants America to be what its reputation says it is. You know, that wacky, anti-collectivist nation. The world’s cool Bohemian cousin who is kind of scary, but captivating. The life of the party. Can you imagine if we really were the bad-ass, individualist, cranky, cool nation of only Lysander Spooners and Rose Wilder Lanes? Who kept to ourselves, but always left the front door open to immigrants?

The fact that I have a lingering disappointment in America always surprises me. We’ve got such great geography, history, folklore, culture. We could have been a contender…We could have been the America that conservatives tell themselves that we always were and are and forever will be. (But better, cause we’d also have Mexicans and gay people.)

And now my patriotism for the year is done. Because again I’m wondering and worrying over where America’s trimmings of liberty are what keeps people from realizing how bad it is, and how much worse it can get. We have the amendments, we have that wonderful document of (mostly) negative liberties (God, what an awesome idea), and then we have a million tiny chips in each one. The Fourth is in particularly bad shape, but since it’s still there in law, are we going to notice if it becomes utterly meaningless, like my friend Bob’s sandals that were eventually held together only with duct tape?

Is it ever going to feel like a people in the street, this time it’s serious, this time we make a stand moment in a nation devoted to pretty words about being the freest place in the world? Are we just lulling ourselves to sleep by repeating what we were supposed to be as a country? What kind of shield is a piece of paper, anyway?