On Mosh Pits, Growing Up, and Being a Libertarian at a Jello Biafra Show 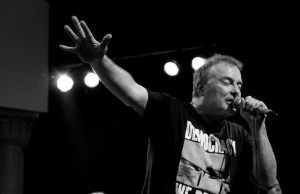 I am not sure when it happened and which flailing body part gave me the bruise, but it currently sits very brown-yellow-purple on my upper arm, looking for all the world like a piece of stage makeup because it’s a bit too perfectly oval.

Last Monday night I mostly stayed out of the Jello Biafra and the Guantanamo Bay School of Medicine mosh pit at a sparely attended Mr. Smalls show. Biafra — looking a little grayer than he did back in 2010 when I saw him last — did as he always does, which was sing newer songs which provoked polite, if sincere appreciation, and then the occasional Dead Kennedys number which brought about a more enthusiastic, cheerfully violent response.

In between songs, Biafra slipped in plenty of topical, geographically relevant rants. Former PA Sen. Rick Santorum got a reference. So did Gov. Tom Corbett. Fracking repeatedly came up. So did the Tea Party in general.

Biafra’s rants are, as always, bracing and amusing in their formulaic way. He calls the Tea Party racist, fascist whatevers, and my face takes on a bemused expression and I imagine — in the spirit of the old Conan O’Brien worst chant ever skits — yelling back instead of “yay!” something like “Yes, many Tea Party members are theocratic creeps, but some people like Rand Paul and Justin Amash have some Tea Party affiliation and they have fought for many good causes, most prominentl opposition to drones and the NSA! Furthermore…” [Booooooooo!]

Or: “I am uncertain of the science behind fracking, but human society demands trade-offs, one of which is energy that pollutes! I believe that knee-jerk opposition to fracking is making the perfect the enemy of the good! Certainly further research…” [Boooooooooooo!]

Nuance of this kind is completely antithetical to the Jello Biafra spirit. The appeal of the Dead Kennedys lay in the killer buzzsaw/surf rock guitar riffs from East Bay Ray, the solid basslines, the weird warble of Biaffra’s voice, and the very existence of songs with titles as direct as “Let’s Lynch the Landlord” and “Nazi Punks Fuck Off.” Subtlety, even later Clash era variety, was not their forte.

Arguably, an exception is the best Dead Kennedys song, and one of the finest punk songs of all time,  is “Holiday in Cambodia.” “Holiday in Cambodia” is a blistering, (comparatively) subtle condemnation of both Pol Pot’s slaughter and fashion radical, whining lefty college students.

It’s also the only time on Monday that I didn’t fear the mosh pit.

I’ve been at country shows too long. I now have even less pit stamina than I did at age 17, when I first stared in fear at the squished together youths going nuts for the tubby old profane Irishman Jake Burns and the rest of Stiff Little Fingers (yes, I love me some old punks). I enjoyed that show. I kept my elbows up and kept my eyes out for people bouncing out of the pit and flailing into me — and then when I heard the opening guitar for “Suspect Device” I found myself joining the joyful masochism of the pit without much thought.

Since that day, at all punk shows, this same feeling never fails to happen, provided I love the music enough. It is difficult to dance to bad music (one reason I’ve never been to a club in my life), and it is much harder to mosh to music you dislike, or even are indifferent towards. The fearless, foolish mosh urge cannot be faked or summoned at will.  Moshing is a fucking stupid activity, and it is wonderful one. And it simply is or is not. I had a hint of the desire to move with everyone else for “Chemical Warfare”, a solid tune off the Dead Kennedys’ first album. I bumped a little on the edges of the pit. I tried my hand at the non-douchey, non-punching people in the face version of hardcore dancing, but that was all.

And then, after more over the top rants from Jello, more pleasant, but unknown solo stuff, there came the familiar notes of “Holiday in Cambodia.” It was all over. I jumped in. All worries over broken glasses, gimp legs kicked, or teeth knocked out vanished in an instant. All was happy screaming along with drunk, disgusting strangers. All was the highest form of joy that music exists to bring us all. We smashed together, my friend A. — tiny and blind, and a better mosher than I am — and I tried not to sexually assault Jello Biafra when he crowd surfed on our hands. (A drunk girl asked if I believed her when she said she had groped the man in an unfortunate place. I did. I think we all did. But unlike my youthful grabbing of the leg of Eugene Hutz from Gogol Bordello, I did not intend to do so. It was more an earnest effort to prevent him breaking his face.)

I used to be bothered that punks and certain leftists thought I was a ring-wing scumbag — that I was never, ever going to be one of those black hoodie and Municipal Waste T-clad people at the Mr. Roberto Project, or Gilman Street. I had so many happy experiences with these strangers, and if they knew me, I would never be one of them. The music wasn’t enough to bridge the gap between us, but it felt like it should be. I knew some left anarchist kids in Pittsburgh who tolerated my occasional presence, but I was not in solidarity with them. Nor did I want to be, even then, I suppose. I have been a libertarian since I was 13. (Since I realized George W. Bush was full of shit when he said he knew everyone executed under his watch was guilty. But that hate didn’t translate into leftism, unfortunately for my teenage social life.)

I can put my fist in the air in shameless emotion, arms around sweating strangers, in a painfully earnest Defiance, Ohio pit, and then the next day go back to my internship at Reason to rake in those David Koch dollars. And as I grew older, I could laugh about that dichotomy more.  It might be more satisfying to be “part of” the scene, than to feel like I alone had that secret joke, but the more “liberty movement” (for all its flaws) I found, the less that alienation from the motivation for this music I love mattered to me. (Plus, after hearing horror stories about the East Bay anarchist scene from T., I once again think I am good. I am not a punk.)

Music is more important than politics, and I wish my politics could be translated into kick-ass song, but at the end of the day, the baggage that goes with these ideas belongs to me for two hours at a show, and then I drop it. It’s not about growing out of it. Or that those shows don’t matter. It’s just…compartmentalizing. Metal fans don’t get to go home and be wizards or orcs. I don’t get to go home and be a punk. It’s a costume — an exaggeration that feels meaningful, and comes from real anger but maybe also is pretend the way “Let’s Lynch the Landlord” or “Fuck Tha Police” is a portrait of a feeling, not a photograph.

I try to explain to my mother the joy of the mosh, but she never quite gets it. I remember distinctly a girl who was my year at Chatham trying to tell me once that she was too old for pits. She was actually two years younger than I was, but that wasn’t even the point. My annoyance stemmed from the fact that this was water from the wide river of grow the fuck up, wear business casual and heels. Certainly the mosh is not everyone’s cup of tea — and again, I don’t believe it can be forced — but the teenage perfection of it, which still feels holy, and mad, and necessary, and not political, is not something to grow out of.