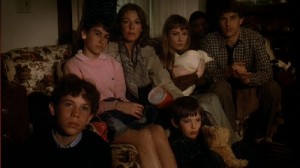 A PBS production from 1983 that ended up in theaters, and with an Oscar nomination for lead Jane Alexander, Testament came at the end of the last Cold War hot flash, along with Threads and The Day After. Those two were all big, showing every grim — television budgeted — detail of the end of the world, or at least western civilization. Threads, bizarrely, is so excruciating that a numbness — albeit a queasy type — starts to set in by the time nuclear winter rolls round.

In Testament, you wish that were the case. This sneaky, understated movie is the Platonic ideal of real horror. Most nuclear war fiction, even if it is all about one family, town, or city plunged into uncertainty, shows you some pieces of the story. Jericho, Alas, Babylon,  On the Beach, they tell you how we got here, even though there is always a fog of war element. Testament is not interested in the why of anything, it just wants you to look until you can’t stand it anymore. This is just the story of a mom, her three kids, and her husband who never comes home from work in San Francisco on the day the bombs are dropped.

The movie takes its time on the family, the totally banal family living in the little California town. It’s about them and how they could be anyone. This could be happening for any reason, and whichever reason that is is bullshit. Even near the end, when Jane Alexander’s matriarch Carole falls to her knees and cries “Who did this?! God damn you!” she’s not asking about the socio-political explanation. It, in some ways, doesn’t matter. There is one tiny glimpse of television new that says nukes have been dropped, then there is a bright light. A few radio broadcasts tell us little later, but they mostly just mean a fraying connections to the outside world.

Things seem alright for a while in town, and the acting and the terrible regularness of it all confirms this. I find myself again feeling skeptical about the lack of hysteria. Hell, maybe “The Shelter” is most accurate then I thought. Why does nobody crack up? Haven’t they seen movies like this one? Jane Alexander is good, but she is mostly a little too composed.

But the everyday living facade, and the ease of watching it for the audience, starts to crack after the town puts on the school play that Carole was preparing for when the movie began. Twenty Kindergartners preform the Pied Piper, and the adults in the audience watch and cry because the see the familiarity: mistakes were made, and the children are going to pay for it. They cannot be trusted with the children. They are why they won’t get to have lives at all.

There are several more plateaus of regular living. Surviving requires working with the other people on town, and it does seem to work. Then another spike of horror comes when Carole’s friend is wandering in the rain holding a drawer that will serve as a coffin for his baby. Still, the food rations, the lines, the organization of everything sends the inevitability of thing back a few weeks. There’s the symbol of hope that is the radio, manned by a level-headed old neighbor. Carole’s oldest boy visits him, and then helps him check on the rest of the townspeople. He rides his bike, which is his talisman that reminds him of his dad, who would pester him into riding with him. Near the end, he has to ride his dad’s bike. He rides it past scenes of graves, and of graveyards filling past capacity. Eventually the bodies are burned instead.

This movie is a sneak, in the most stomach-aching fashion. The town is staying organized, until the police chief suddenly has a subtle, and entirely real nervous breakdown during a town meeting in church. The kids are bratty or earnest in turn until they are quieted by radiation sickness. The daughter is daddy’s girl, and rather dull, until the conversation she has with her mother about sex culminates in her tearfully saying that that love, and sharing, and all that will never happen for her, and she knows it. There are sentimental trimmings, including– like On the Beach — an overly intrusive soundtrack.

But the horror wins out. Fiendishly abruptly, things falls apart and the graveyards fill, the littlest boy is suddenly sick in the bathroom. After a few minutes, he’s wrapped in a sheet. That’s the progression of the movie now. It picks up speed as the family runs out of time.

Good parents are heroes in the most terrifying way. A good parent is supposed to give up their life for their child. The only thing more frightening an idea than that is the parent who can do nothing except watch their children slowly die. It’s happened, and it will always happen because of cruel accident and disease. But movies like this can’t help but remind me of what the US did to parents in Hiroshima and Nagasaki. It — the government that is just another word for things we choose to do together — made parents watch their children die. The power of the bombs were the way they killed slowly or in a millisecond. The latter gave us shadows on sidewalks, grim poetry and metaphor, and at least a complete lack of suffering for the victim. Radiation sickness, on the other hand, is slow agony. Nothing artful in that, just vomiting, and diarrhea, and hair loss, and nausea, and dizziness, and death. This movie, and other apocalyptic fiction, were intended to ward off what they showed on screen (though nothing is as grim as it would be, not even the ’80 dread trio). And they worked, if the tales of Reagan watching The Day After are as simple as they sound. But I can’t help but be reminded that that nightmare already was done to thousands of people. Our Cold War fiction is the horrors that were avoided. We are never as interested in the ones we caused. Too prosaic.

Testament is propelled by its characters — simple ones, who by rights should have stayed that way. We shouldn’t be watching them at all, because this shouldn’t have happened. But it’s not nihilistic. It’s not Threads, where it just pounds at you, screaming that this must never be, and if it does we’ll be brutes, and then there will be nothing left of humanity — because, seemingly, humanity is a thin skin over a pit of savagery. For a movie about the complete lack of control over saving yourself, and your loved ones, Testament highly values the idea of being good and decent as you die. It’s a feeble fading away with nothing to be done in one way. In another, you remember your loved ones who left, you help your neighbors, and you don’t become a monster. The smaller this movie gets — and it is oh, so small by the final — the more clearly it demonstrates that one family is the world, and the world is just about to end, but perhaps it ended as well as it could.