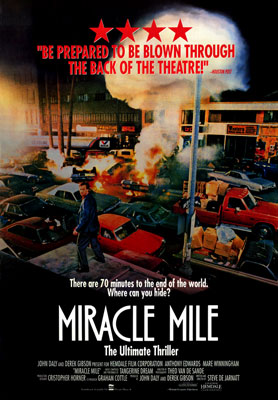 Welcome to The Stag Blog’s new series dealing with portrayals of the end times through movies, novels, docudramas, documentaries, instructional pamphlets and films, songs, and and people’s memories. The focus will mainly be on nuclear war fears during the Cold War, but we may branch out into some asteroids, aliens, or plagues. Let’s keep it loose.

Guests posts are particularly welcome on this subject — give me your best nuke movies, your memories of hiding under desks, or your childhood (or adult) worries over alien invasion.

Our first entry is the 1988 film Miracle Mile, starring Anthony Edwards and Mare Winningham. It’s got some of the genre’s — or subgenre — conventions, but it’s got a different feel to it than many hyper-realistic movies dealing with Cold War terror.

It’s hard to know how Miracle Mile would play out in the daytime. The majority of the movies takes place at night, and not just night, but the bleary-eyed, dead hours of 4 a.m. to just-about-dawn. And that’s the time to watch it, and let its atmosphere of dread and panic and strangeness take you over.

Romantic everyman and trumpet player Harry (Anthony Edwards) meets his dream girl Julie (Mare Winningham) at the museum. They have a date over ill-advised narration and a dreamy, synthy ’80s score. They make a plan to meet up at midnight after her shift at a diner. But Harry’s power goes out and he oversleeps, so he rushes to the diner at 4 a.m. There’s a cast of promisingly odd characters having their very early breakfasts, men who tell dirty jokes, a transvestite, a stewardess, and a 1980s businesswoman in a power suit. There’s also the cook/owner and another waitress. Harry calls and leaves a message of apology for Julie, and then the payphone rings. It’s a young, frantic-voiced man named Chip who thinks he is speaking to his father. He’s in North Dakota in a missile silo, and he’s trying to tell his father that the big one is happening. Nuclear war. The US will strike first, and then the Soviets will return it in 70 minutes.

The acting here is perfect. Harry has a quaver in his voice, but isn’t yet convinced. The voice on the phone is exactly right in its unhinged terror — a lot of post-50s and ’60s nuclear war fiction doesn’t have enough hysteria. (Even the hero should have a moment or two of terror, before they’re stoic again.) Chip realizes he has dialed the right number, but the wrong area code. He begs Harry to tell his dad he’s sorry for something unclear. Then a voice in the background, gunfire, and then, like a horror movie, the military man comes on the line and offers no apologizes for the hoax, no confusion over what’s happening, no gotcha!, just “forget everything you heard and go back to sleep.”

So begins the nightmare. Harry is so shellshocked he smacks his face into the diner door. At the counter, his food has arrived, and he stares at it as blood drips from his nose onto his overeasy eggs. After a few minutes of wondering if it could be true, he decides it is. He tells the other diner goers what has happened. A few minutes of argument later, a phonecall by the powersuit woman on her enormous, 1980s cellphone confirms that a mysteriously large number of important people in Washington are just now in South America.

Already, the understated, quiet dread that I am particularly partial towards in movies is leaving. Part of me wanted to stay in the cinematic possibilities of the 1987, 4 a.m. diner and its promising case of weirdos. But we’re going a different way. Everyone in the diner climbs into the owner’s van, while the competent woman — Landa — pulls in every favor possible, trying to charter a flight to Antarctica. Already, you, the viewer, should be thinking of the time and knowing it’s impossible that anyone will make it, but you’re caught up in the exhilaration of that slim possibility of survival.

Instead of sticking with the group, though, Harry needs to go and find his new love Julie. He’s on his own with that. But the diner owner won’t even slow down, though. He’s advised to tuck and roll and he does, taking the diner owner’s gun. Alone on an overpass, now with a cut head, Harry stops to tell himself this must be a dream. He fires the diner owner’s gun into the air and confirms that weight and heat of it, and no, it’s real. But alone, bleeding, carrying a gun, standing on a highway with the knowledge that it’s supposed to be an hour until nuclear holocaust. If that’s not a nightmare, what is?

Harry reluctantly highjacks a car driven by Wilson, who offers stolen stereos in exchange for his life. And so begins the part of the story where if Harry somehow is wrong about the call — well, some mistakes cannot be undone. They drive fast. They pull into a cabs-only gas station and bribe the owner for fuel. A cop car pulls up and demands that they lie on the ground because the gas station man has an illegal shotgun. Wilson squirts gas from the pump onto the female cop. She’s blinded and fires her gun. She catches fire. The fire spreads. The other cop burns. Harry and the criminal speed away in the LAPD cruiser as the gas station blows up. This is the first completely surreal moment. It should be cheesy. It somehow isn’t. They drive on.

Wilson drives off when Harry goes to get Julie. He manages to reunite her estranged grandparents in the process, and those two drive off to share a last breakfast together. Wilson is seen again, he crashes the cop car through a mall window. He is mortally wounded beside his girlfriend or wife who is already dead. Harry and Julie run in. At one point the Wilson his love and tries to walk up a down escalator. It’s still not funny, just troubling.  Even later when Harry frantically runs into an early morning gym searching for someone who can fly a helicopter isn’t funny. The bizarre ’80s workout clothes add to the surrealness, and you just feel a bit sick instead of amused.

“It was all a dream” is an awful cliche that nobody will dare use for another 50 years. But to say Miracle Mile is a nightmare isn’t to say there should be a moment of Harry waking up in bed, realizing he’s safe. There was supposed to be such a moment back when the screenplay was a hot item in Hollywood, and was going to be part of The Twilight Zone movie. Director and writer Steve De Jarnatt refused to include the relief of waking. He wanted it to be real.

The pacing goes deeper into a nightmare, with half a dozen versions of your worst one ever offered: there’s being chased — first by the police, then by a crazed man into a sewer; there’s hysterically trying to make someone else understand, trying to find someone who will help you; the fear that it was all a mistake, and now you’ve done terrible things and caused deaths for nothing; finding yourself the bad guy with the gun, yelling orders; the lonely panic of being the only one who knows the truth turning into the blind, crazed horror of the masses trampling each other in an orgy of fear, and the worst part, the clock ticking away and there isn’t enough time — there never really was enough time. The only hope of anything beyond Lovecraftian indifference and panic is the love Harry has found in Julie. But she’s only just been found, and being “the girlfriend” she never really has a compelling personality. (Maybe that doesn’t matter). All of this, though, may be less of a nightmare, and more of an insomniac’s waking, dazed horror while the whole world goes wrong around him and he must be getting it wrong, it can’t be real.

I won’t say how it ends, only that the uneasy pacing works, even when the quiet turns into the screaming, teeming mob in the morning. Instead of the myriad other versions of nuclear doom in movies, compare Miracle Mile to Signs. Signs isn’t necessarily unreal, or a metaphor for losing faith, or any of the other suggestions offered for the controversial/cop-out ending. But it has a quality of another world that isn’t quite our own. It doesn’t matter if Miracle Mile is “real” or even “realistic” in its portrayal of facing the end. Its lurching horror makes it a worthwhile and troubling watch — it feels more personal and more queasy in the guts than stern generals in war rooms ordering strikes against the enemy.