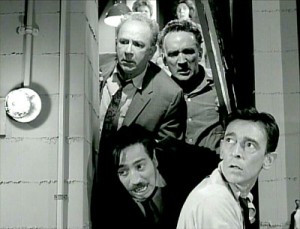 Don’t be these guys.

One of my criticisms of apocalyptic fiction — particularly the alien invasion or nuclear war variety — is that most characters are not hysterical enough. For example, the early aughts CBS show Jericho, which was all about a small Kansas town surviving after 25 cities are nuked, was enjoyable and disturbing, but nobody was ever upset enough about the situation. The very first shot of a faraway mushroom cloud is seen by a little kid standing on his roof — and it’s just killer. But five seconds later, after only the kid being shown in tears, that’s it. No adults are crying, no adults are hysterical in the nightmare way that I truly believe they would be. Not that civilization would crumble, or people would eat their children in five minutes, exactly, but that in the initial moments and days of nuclear war — even in the face of a visible mushroom cloud — people would flip. Even if they later rallied, the toughest among us would break down to some extent.

The Twilight Zone is not known for its realism — social commentary notwithstanding — perhaps because old TV shows are inherently a bit theatrical to youthful eyes (or to cranky people like my father).

Burgess Meredith the bookworm is eventually suicidal after he survives the H-bomb attack in “Time Enough at Last,” but he’s still impossibly mild-mannered about it all. “Time Enough at Last”  is a classic episode for a reason, but I don’t fully believe his reactions after the world is gone. The Rod Serling-penned episode “The Shelter” — in spite of some dramatic, necessarily dated elements, and some showing, and then telling — works better.

We see that Dr. Bill Stockton is throwing a dinner party, with his wife and three other couples. A warning comes over the radio that unidentified objects have entered US airspace.  Stockton, who has previously been teased for his doomsday preparations, has a fallout shelter in the basement. The other couples run home. Stockton and his wife, along with their nauseatingly chipper ’60s son, gather supplies. There’s an eerie conversation between Stockton’s wife and himself about the point of survival at all after the missiles come. The actress (Peggy Stewart) does a fabulous job, not hysterical, but displaying a bleak, tearful terror that shows she has already given up just from imagining the world that is to come. Stockton (Larry Gates) is not quite as good, but his sweaty, wide-eyed determination to save his family still rings true enough. He’s all masculine, reasonable panic.

The true conflict arises when one by one the couples come back, some with children in tow, begging to be let into the shelter. They have no basements, or they have half-finished ones, or they simply know that Stockton has a shelter and they do not. They plead, they cry, and Stockton grimly says there isn’t enough air or supplies. Every single person with dialogue sells this episode. There are no women to be slapped back into sense, no men who have everything in hand, there is just barely-contained desperation that explodes.

And the way they turn on each other — AKA, the topical commentary of it all — mostly works. Half of them preserve their humanity fairly well, the worst man goes from zero to xenophobic — turning on the sympathetic, desperate mustached guy — and he also has the bright idea of breaking down the shelter door. This mob, with some protests from the two half-reasonable men, does so. The viewer will note that everyone crowds in once the deed is done. (No mention is made of the fact that they have doomed Stockton and family, and still not saved themselves through this idiocy.)

The moment they are inside the shelter, the radio says the objects were just satellites. There is a palpable sense of shame in the air, again done well. The final speech from Stockton — wondering whether something besides a bomb destroyed them that night — is not fully necessary. Nor is the Serling tag that says the only moral here is that “for civilization to remain, the human race must remain civilized.” This was already there for the teaching, without the postscript.

Contrast “The Shelter” with “The Monsters are Due on Maple Street” — another Serling classic — and you can see the former is vastly superior. Written at the height of the Berlin crisis, it feels credible, in spite of the aforementioned moral lampshading. “The Monsters are Due on Maple Street” is the story of another block dissolving into suspicion, fighting, and hatred. But they do this simply because the power is out and a few strange things are happening. Much of the dialogue feels clunky, and the episode cannot be watched today without it feeling like a hamfisted anti-McCarthyist screed. The end result that it’s all been an actual alien experiment in inducing paranoia — something the aliens feel the need to highlight, though it was clearly already shown to us — doesn’t make the conflicts feel any more believable.

And the ET subject matter isn’t the problem. Move “The Shelter” to an imminent alien invasion, and it would feel just as true, and the barely-contained terror radiating from the actors would still impress. I am an optimist about human nature, but we were told to fear fear itself for a reason. It does bad things to us. Serling, more subtle than average, shows this nicely in “The Shelter.” 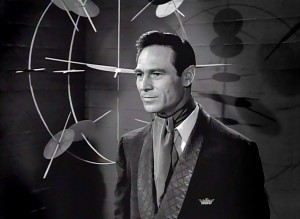 Don’t be this guy either.

Another Serling-penned episode, this mostly exists as a character study of an awful man. The setting is a bomb shelter and the stage is set for a would-be practical joke. Millionaire Paul Radin (Joseph Wiseman) invites three people from his past to come to his lair, and has readied a fake Civil Defense warning and a television screen with bomb footage to make them believe that nuclear war is now.

Present are his former highschool teacher, his former military commander, and a reverend, all of whom he has decided wronged him, but we see that only in his arrogant, nasty impression of how things were. Unfortunately for Radin, they all believe his trick, but after unpleasant conversation (the teacher is particularly good and cutting, she’s played by Katherine Squire), each one chooses to leave the shelter instead of begging his pardon, and to let them stay. This is all Radin wanted, but they won’t do it. They face annihilation rather than apologize to him — or rather, they are not interested in living out their days with an awful man in his awful, doomsday kingdom.

They leave, and he yells at their backs, and then rather abruptly he seems to lose his damn mind. The audience is waiting for a twist, and Serling plays with that expectation — maybe a nuke will really happen just at this synchronistic time! Nope. Radin has just snapped. His Twilight Zone fate is to be nuts and to believe he is the only man left after nuclear holocaust. The message here isn’t so much remain civilized in the face of the greatest imaginable horror, but don’t be a dick, otherwise people will let themselves be melted rather than spend time with you; this makes it a bit less satisfying an entry in the nuclear terrors Twilight Zone canon.