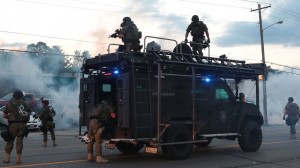 Want a peek into the deranged minds of the American people?

According to content aggregation site BuzzSumo, over the past week the most shared story on Facebook about the tragedy going on in Ferguson is this piece from the Conservative Tribune, which has 93540 Facebook Shares (as of 2:46 EST, 8/14/2014).

The article highlights a video from a “young black man containing a message for the black community and rioters, challenging them to stop blaming police and white people and start taking responsibility for their own actions.”

While liberal media is continuing to stir the pot, there are plenty of common sense folk in the area who are voicing their opinion about the shooting and rioting thanks to the power of the Internet.

Awesome. This young man is absolutely right. Regardless of color, every person in the country needs to learn to take responsibility for themselves and the actions they take.

It’s a tragedy that a young man, regardless of his skin color, has had his life rubbed out. This should be the focus here, that a family has lost a child due to poor decision making.

A tragedy of this magnitude should serve as a cautionary tale about the consequences that come with the choices and decisions that are made on a daily basis, not the color of a person’s skin.

None of this should be surprising coming from a website whose tagline is “In Defense of Western Civilization.” Why blame the militarization of police or ingrained racism when you have the “liberal media” to kick around? However the most sickening part is that they completely ignore the police brutality and mishandling of the situation by blaming the killing of Michael Brown on “poor decision making.” It’s such a ridiculous (ahem) cop out, yet, it’s all too common amongst these right-wing sites to never speak a word of ill will towards the police, especially when a minority is in the cross hairs.

Contra the race-baiting, police apologetic being passed around on Facebook, Twitter’s most Retweeted link is “I am Mike Brown Live from Ferguson, MO”, a Livestream from KARG Argus radio showing videos of the protests. I assure you, you won’t find any police appeasement there.

Looking further into the most shared stories, we find an interesting mix of news and putrescent “think pieces” on the Facebook side of things.

Following up the “Black America has a Message for the Race Rioters” we have noted idiot Matt Walsh clocks in at #4 with his latest tragedy-baiting screed. An article about the dangers of police militarization and a Washington Post reporter’s account of being arrested also make the list.

So what does this all mean?

That there’s a lot of people on Facebook, and there are a lot of users who are living in fearful white-only bubbles.

Facebook currently has over 150 million users in the United States compared to Twitter’s 37 million. But even with the massive amounts of users, there’s little danger in sharing a controversial article on Facebook.

The (almost certain) homogeneity in the networks of those who shared the “blame the black people, not the police”  pieces preclude anyone from outside their friends from ever seeing it. Twitter’s open structure, on the other hand, allows for outsiders to comment, shame, and call-out anyone (for better and for worse).

Basically, on Facebook racists and those who would rather cast aspersions on the black community instead of the police are free to do so without repercussion.

And the numbers don’t lie.

Some Responses to the Fullerton Police Officers’ Acquittal 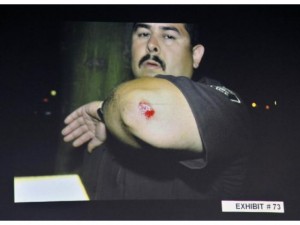 Ramos displays an injury sustained during his confrontation with Thomas

Afterwards, Orange County District Attorney Tony Rackauckus said he wouldn’t pursue charges against a third officer, Joseph Wolfe, who was to be charged separately with involuntary manslaughter. Yesterday and today, members of the Fullerton community continued to express outrage and bafflement over the officers going free.

(The FBI is looking the verdict, however. And Thomas’ family says they will continue fighting for their son, including filing a civil action.)

In spite of the excruciating half hour of surveillance footage that includes Thomas screaming out apologies and cries for his father, in spite of Ramos saying “Now see these fists? They getting ready to fuck you up”, the officers are not criminally culpable.

It’s difficult to respond to the case and the verdict without being “overly” emotional. I know several male journalists who acknowledge shedding tears when they watched the video in which Thomas can be heard struggling to breath and crying for his dad. Cicinelli and Ramos’ defense attorney did what he was supposed to do, namely raise enough doubt in the minds of jurors. And part of that defense was to argue that Cicnelli and Ramos were doing what they were trained to do. Maybe they were. Undoubtedly that’s worse than them being rogue brutes. If police cannot be trusted or trained to deescalate a confrontation with a man who appeared to be homeless, who was known to the police and the community as schizophrenic, and who seemed unable to obey commands, then it’s hard not to wonder what purpose they serve beyond a mentally ill transient-removal service.

Cicinelli, also, has already announced that he wants his job with the Fullerton PD back. The sheer volume of bad press that might result could save Fullerton’s citizens from being under Cisnelli’s lawful authority again, but you never know. 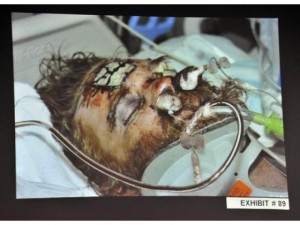 Thomas during his five days on life support after the beating

Here are some notable responses to the verdict:

Who the fuck do we blame here? Ourselves. We had a video and a body. We had a DA willing to bring charges against the perpetrators. What we didn’t have was a jury pool willing to convict these two men of murder simply because they were police officers. If the american public can be this apathetic, we have nobody to blame but ourselves. Yesterday 8:15pm

Anthony Gregory, writing at the Independent Institute’s Beacon Blog, puts the Thomas killing into the context of the state’s violent nature:

It is the nature of the state that acts that would be considered criminal if conducted by private individuals are legal if done by the government. Government is a monopoly on legal violence, after all. In today’s America, this reality is no clearer than with the burgeoning police state, whose agents routinely commit violent acts that would condemn most of us to a cell for decades.

The Atlantic‘s Andrew Cohen seems more shocked than anything else:

I followed this case but never wrote about it because I assumed—wrongly it turns out—that Orange County jurors would convict. But I should have known better. The results of these cases often don’t turn upon the strength of the facts or upon the evidence introduced at trial. They often turn instead upon what a group of people, a group of jurors, think is right and wrong. Jurors obviously believe they made the right choice. But because of the existence of that video, and what it shows us with our own eyes, the rest of us are more free than usual to criticize that choice. And I choose to do so. What has happened here— both on that night in July 2011 and again today—is wrong. Painfully, manifestly, cruelly wrong. It is a travesty upon justice.

OC Register Columnist David Whiting correctly notes that bringing the officers to trial was a significant thing for Fullerton and for the rest of the country, but that’s a sign of serious accountability issues, not a reason to celebrate. The rest of the awful piece tries too hard to be optimistic and let’s all move on-y. Whiting says “the rule of law” won out, and nobody broke any windows in anger:

We saw Fullerton police persevere through the cries of “murderers” from some protesters. And we didn’t riot after the not guilty verdicts.

Getting kudos for honoring the rule of law may seem silly. But it’s significant considering what’s happened in many American cities – including Anaheim – after some officer-involved controversies.

More tellingly, Whiting adds to the win column that “we witnessed our district attorney risk his political career by prosecuting those officers.” Did the DA risk his career by daring to prosecute police officers? And if so, isn’t that troubling and worth exploring in more detail than a sentence?

Finally, cartoonist Bob Aul sums it up in the OC Weekly: 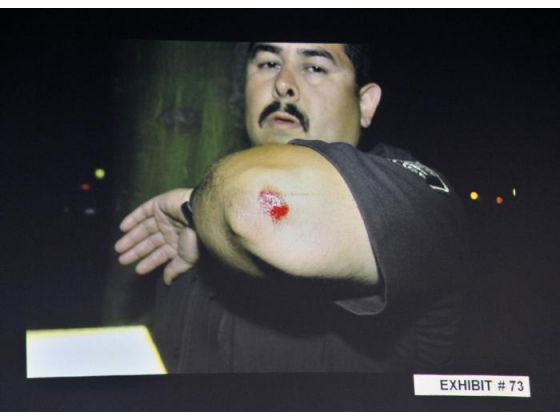 The undercover cop doesn’t even show his badge to rapper Xstrav, he just demands the Arizona tea, so he can make sure it’s non-alcoholic. The real reason Xstrav gets cuffed, I’d say, is he was guilty of “contempt of cop” and “failure to be sufficiently cowed.”