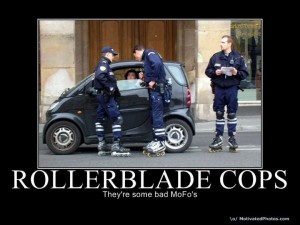 Hot on the heels of President Obama’s 23 new executive orders upping gun control, famed and fearsome conservative commentator Ann Coulter has a new column entitled “Guns don’t kill people, the mentally ill do”. Under that straight to the point headline, Coulter points to the mass-murders at Virginia Tech, Tuscon, and now Sandy Hook and mentions that each of the killers there had a history of mental illness — Tuscon shooter Jared Loughner in particular was feared by several acquaintance and teachers.  And yes, there are rumors, still unconfirmed, that Sandy Hook shooter Adam Lanza snapped because his mother wanted to commit him to a mental institution.

Writes Coulter, not bothering to source anything:

Innumerable studies have found a correlation between severe mental illness and violent behavior. Thirty-one to 61 percent of all homicides committed by disturbed individuals occur during their first psychotic episode — which is why mass murderers often have no criminal record. There’s no time to wait with the mentally ill.

Coulter, of course, doesn’t bother to address the confirmation bias when it comes to trusting “warning signs”. Yes, some people who end up being killers frightened other people beforehand. What about all the people, even seriously mentally ill people, who weirded out their neighbors and teachers and never shot up a schoolhouse? Do they have rights, or don’t they? Coulter suggests no. Because it’s just no longer easy enough to involuntarily commit crazy people.

Or rather, she says don’t take guns from the rational and the law-abiding, instead — well, what?

Coulter bemoans the American Civil Liberties Union who “have decided that being psychotic is a civil right”, thereby making involuntary commitment standards overly strict.  She implies that this is yet another lefty, PC outrage that will spell our demise, but that is all. What exactly to do, and how to do it, is lesft unsaid.

Lefties who cry for gun control, especially the stricter than is popular variety, never seem to answer the question of how it shall be done. Banning guns — even only those that became legal post-assault weapons ban expiration —  sounds great, okay. What’s the punishment for defying the ban? Who is going to make sure it happens? How will it be organized? Do we need another bureaucratic office to oversee the proceedings? Liberals have a habit of crying out for government intervention and ignoring the potential costs in money, time, and on occasion, life. Conservative queen Coulter is doing exactly the same thing here.

If she wants America to “try something new” and make it easier to involuntarily commit individuals, how shall we do it? Will it be up to cops? Professors? Teachers? How long will people be kept? By what standards shall the mentally ill be judged unable to be free? Actual threats of violence, strange behavior, unorthodox opinions, paranoia? When will they be fit to be released? Are there appeals?

There are 300 million guns in America, yes, but according to the National Institute on Mental Health, 1 in 4 Americans suffers from a mood disorder, 1 in 17 from a “serious one.” How many of those 57 million Americans should lose their Second Amendment rights, according to Coulter? Or do you just lock the mentally ill up, thereby ignoring messy gun rights questions altogether?

There’s not really any point to appealing to Coulter’s attachment to civil liberties, because judging by past history, she has none. She does, however, profess a theoretical objection to government excess by mocking liberals and embracing conservatism.

The murderers that Coulter describes should have perhaps been kicked out of their schools, and perhaps prosecuted in the case of the Virginia Tech shooter Seung-Hui Cho who stalked three women. He also spent time refusing to talk. And Adam Lanza had trouble looking people in the eye! However, none of these young men, until they massacred scores of people, had done anything that would justify locking them up indefinitely at a psychiatrist or a judge’s pleasure. And, as Reason’s Jacob Sullum put it today “Stopping Mass Murderers Would Be Easy If Psychiatrists Were Psychics”.

Even law and order conservatives usually think that someone locked up should actually have committed a crime first.  But Coulter offers nothing concrete in policy suggestions, only a breezy disdain for the heroic work of the ACLU, and people like the late Thomas Szasz, who dared to object to easy involuntary commitment.

Coulter, it is worth noting, is also pro-Gitmo, so at least she is consistent in her approval of holding people without trial. But her suggestion that the government “try something new” because “there’s no time to wait” in regards to the mentally ill makes Coulter sound exactly like the big government liberals she so loathes.