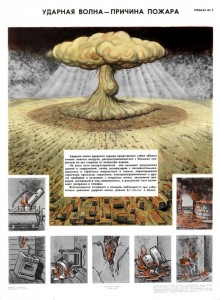 “As Good as New” by Charlie Jane Anders: Anders is the best full-time staff member who has ever worked under the banner of anything remotely affiliated with Gawker. Her short story, unlike so many short stories, contains happenings — big happenings. The end of the world is already over and done with when our story begins, but that’s just the start. The end of the world, a genii, and lots of quips about theater, this story has most everything you need. It’s funny, it’s unexpected, and the disparate elements work much better together than they have any right to. The ending is touching as hell, and doesn’t go for the most obvious “and she didn’t remember anything” trope. The prose is witty, smart, and not New Yorker obtuse. It’s direct, but it’s not simple, or stupid, no matter the fanciful absurdity of the plot. Read it.

Leven 7 by Mordecai Roshwald:  This 1959 novel has some of those short story-like problems with (arguably) unnecessary opacity. We do not know the enemy country of our protagonist’s country. His name is X-127, and he’s among the crowd of special military folks who are to be send underground permanently in case of nuclear war. Not for safety reasons, but rather so that the most well-protected people in the nation are those who are able to push The Button. These individuals are to marry and have children and have a whole new society without ever leaving the bunker again. [Spoilers ahead] X-127 doesn’t want to spend the rest of his life under the ground, but he doesn’t really question his situation until another man has a mental breakdown rather than push The Button once the war begins. During life below, X-127 gets a horrible mate, he tries to cope, he learns about music, and eventually those on Level 7 realize that radiation is affecting the folks in different bunkers all over. Eventually it hits their neighbors at 6. It also hits the unnamed enemy. There is communication with them, and exchange of of oddly juvenile quips, and then they go silent, too. Finally X-127 is the only one left, and he passes away on the final page. The book isn’t bad, but it’s less artful in its basicness than the Anders story, say. The details of the conflict are missing for a logical, albeit every society sort of reasoning. We do eventually learn that the danger of automation is part of the message — The Button didn’t need to be pushed, it pushed itself. The world blew itself up. As far as humanity (or some version) going dark novels, Leven 7 is not one of the best. Worth a quick read, however, as it still brings the vital nausea that nuclear doom fiction must.

Ashfall by Mike Mullin: To clarify, there’s nausea like the ending of A Canticle for Leibowitz, or even the more prosaic On the Beach, which is welcome. And then there’s just unrelentingly unpleasant. Strangely enough, this Young Adult novel that doesn’t even involve the end of all humanity manages to be grimmer still than we’re all doomed stories. Perhaps because nuclear war fiction, even when the worst happens, can be seen as a crisis to be averted — with Rod Serling saying this is only one of many possible futures, so beware. A novel about what happens after the Yellowstone Caldera goes off has no teaching moments, just the unsatisfying message that nature will fucking destroy you if she feels like it. But it’s not just the bleak descriptions of endless ash, and dark skies that makes this book such a slog. There’s rape, murder, more murder, probably cannibalism (our hero is given meat by a scary guy, and it tastes like wild pig, but it’s got a disturbingly long bone) and none of it is literary, and none of feels like it has a purpose. I am usually not one to complain about survival tales, since they were my obsession as a child, but this book just feels like a laundry list of one. And it certainly seems absurd to complain in an apocalypse themed review series that there is nothing redeeming about this tale of woe. Yet, in spite of Alex, our 16-year-old protagonist, finding love, it feels that way. Life is going to be exhausting in the wake of the supervolcano going off, and that’s all. Maybe at the end of the day, I prefer the tales of human annihilation to the paint by numbers survival descriptions — and this is long-ass book. Perhaps it’s the vintage, yet rarely kitschy threat of the big one. Anyway, perhaps I’m the nihilist, but somehow this book still feels more like one. (I’ll probably still read the rest of the damn series if I get bored.)

Silo, a short film by David Soll: This is a short film that feels like it should be a cartoon — so much so that I can picture how it might look. It’s kind of silly, and I have a million questions about the ending. On the other hand, as io9’s Lauren Davis noted, the setting of an actual ICBM silo makes it fascinating to look at. This film is cute, I just am not sure it should be, all things considered.

There Will Come Soft Rains, a Soviet short film based on the short story by Ray Bradbury: This is is a haunting little piece of art. I don’t know the short story, but I do know enough of Bradbury to be unsurprised that the robot with its deep, scary Russian automation is first disturbing, and then I feel bad for it. I won’t spoil anything, because it’s all about the animation, and its deeply distressing loveliness. I will say that in the first two minutes, I got a genuine chill down my spine. I stopped chewing on gummy bears and just watched. Do the same.

Today’s video: Ketch Secor and Critter Fuqua singing an unrecorded Fuqua number, to get us all jazzed for the new Old Crow album next month:

(and not to cry too much over it being sans Willie Watson — whimper). I did not see this show, nor have I seen them play this song, but I did catch their reunion tour, and it was amazing.

Oh, okay. Here. My hat is basically the first thing you see.