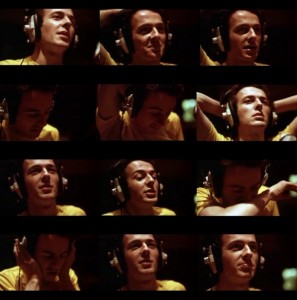 6) Townes Van Zandt, Be Here to Love Me

Before I watched this thing, I knew “Pancho and Lefty” and Justin Townes Earle’s namesake, and that was about it. But this sad, sad, documentary that is a country song in itself went so well with my last Nashville adventure. S.T. and I perched in R.B.’s disaster of a music nerd bachelor apartment and sunk into the life of Townes.

The most memorable part, besides the quiet, woeful songs? Van Zandt’s son talking about how he learned his dad was dead. Switching across the stations one night, the son heard one of his dad’s song, which was rare. Then he heard another one and thought, oh, a two-fer, great. A third song followed and he knew something awful had happened.

Before S.T. and I watched this, and before we saw Old Crow Medicine Show that night for a WSM radio show, we had paid tribute to Townes by having a beer at The Gold Rush. There is a picture of the man himself above one of the bars. When S.T. and I went to take a photo, the middle-afged bartender began telling us perfect, tragic stories about how shit-faced Townes used to stagger home from the place. Sometimes he would leave his lyrics-covered napkins behind, and the bartenders would keep them for him. By telling us these raw, real tales of sorrow, the bartender managed to simultaneously puncture the unserious fun time impression of the country-drunk and enhance it one hundred-fold. All in all, it was a very Nashville moment.

Favorite Townes Van Zandt song (besides the one I put in Friday Afternoon links below):

A group of us has rented a little house in Nashville — by us, I mean the collection of oddballs I met from internet Old Crow Medicine Show fandom, all of whom are at least 15 years older than I am — to see the group at the Ryman for the switch from 2010 to 2011. There was moonshine, black-eyed peas, collard greens, Prince’s Hot Chicken, and S.T. and J.K. busking their hearts out on the corners and side-streets off of Broadway. And when S.T. and J.K. practice their fiddle and guitar, it gets serious — even religious. During their practice at our (for the moment) little house, the DVD of Les Blank’s Sprout Wings and Fly was brought out. “Tommy” they called Jarrell. In their reverence, he needs no other name. I didn’t display my ignorance, but watched and tried to learn the appropriate lessons and display my old time piety.

Jarrell was an old school Appalachian fiddler, absolutely from another universe, even while Blank filmed him at the end of his life in the 1980s. It’s just one of those perfect folk moments in amber that makes one wish to be named Lomax. S.T. told me later that the story goes that Jarrell’s musician father learned “Poor Ellen Smith” from Peter Degraf himself as he sat in jail for the poor woman’s murder. That story is so America, that I hope never to confirm whether it is true or not.

Here’s the trailer for the documentary:

4) The Clash, Westway to the World

I don’t remember the first time I watched Westway to the World, but my 15th and 16th years saw the DVD nearly worn to splinters. It’s just the Clash talking, with archival footage. Headon is withered and still on heroin, Jones is all teeth and a bit of smarm, Simonon is still handsome and cheeky, and Strummer seems sweet, and sad, and regretful about his key part in fucking up the completely magical foursome had had going.

Oh,  Let’s Rock Again! I waited breathlessly to watch, sobbed my eyes out when Strummer is passing out flyers to his own gig, or sitting on the sidewalk chatting with teens, or being hugged by hysterically joyful Japanese fans, and then I could never watch it again. The Clash I missed by miles, but if congenital heart defects and my lack of prodigious coolness hadn’t gotten in the way, I could have seen the Mescaleros, dammit. I missed it. I fucked up. I was late. But the whole documentary just makes you love Strummer’s humanity and his earnest, human optimism. (Which, knowing how he turned out, makes asshole, must be a punker, 1976 Strummer even more adorable.)

And the clip where Joe passes out flyers to his own show — contrived or not, I want to hug him real bad. Strummer was the most huggable of all the old punk rockers.

2) Simon and Garfunkel, Songs of America and The Concert in Central Park

The latter, a 1981 concert that made 12-year-old me infuriated that I had even missed that pale imitation of a folk reunion by six years of life — making the ’60s I yearned to visit seem farther away still. The former, though officially packaged with a shiny new version of Bridge Over Troubled Water a few years back, came to my eager hands as a grainy VHS from an internet friend (I “met” her in an MSN Paul Simon fans group. She also sent me a burned CD of a bootleg of the once-rare The Paul Simon Songbook). That tape was painfully wonderful — finally a glimpse of the duo at their peak, the thing I missed. The thing itself is pretty low-key, sometimes it lags, but there are some good concert scenes, and a particularly wonderful Simon and Garfunkel warming up bit.

And Songs of America! (You God damned kids have no idea what it was like pre-Youtube. The dial-up days were dark indeed.)

And the Central Park one as well!

(I finally saw Simon and Garfunkel in 2004, though for most of my childhood I assumed it was impossible. I heard “The Only Living Boy in New York” and “Suspect Device” that year. Seventeen was a good musical year.)

This, for the distinctive memory of my father rushing home from work one day, piece of mail in hand, and how he popped in his brand new VHS of the flawless Talking Heads doing their thing. He and mom were actually there for one of the nights the concert was made from. Though they were a very New York City band, my parents in LA in 1984 watching David Byrne in his great big suit, dancing with a lamp, makes them seem very California, and very familiar in a way — as if they helped raise me. And the concert is as wonderful as everyone says — its slow build from David Byrne playing “Psycho Killer” all alone to the full, wild stage and incomprehensible energy. It’s perfect, and it’s strange, and it’s my parents being cool and before my time.

— David Byrne and that lamp.