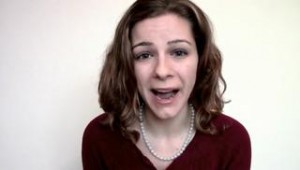 Recently Julie “Token Libertarian Girl” Borowski caused a stir, at least in internet Libertopia, with her “Addressing the Lack of Female Libertarians” video. In the video, Borowski buries some good points under generalizations and arguable slut-shaming of women who are less personally conservative than is Burowski. Borowski argues that women are more susceptible to peer pressure and outside opinion than are men, meaning that a fringe political idea like libertarianism is even less appealing to them. This is debatable and invites long and tedious conversation about nature versus nurture, gender roles, and other topics.

Borowski then moves into mourning the lack of libertarian ideas in popular culture. Her rant against general interest lady-mag Cosmopolitan is appealing to me, the female magazine-nerd who hates Cosmo as much as that opposing pillar of monthly bullshit Adbusters, and indeed, when publications like Cosmo address politics at all, they do operate from certain liberal assumptions…. (Cosmo, so archaic in its inability admit that women may have a wider range of interests than sex, was once downright brazen in its acceptance that women do indeed have sex outside of marriage.)

Borowski’s rant about the absurd cost of the aspirational products touted for sale in Cosmo versus the magazine’s implicit assumption that government should cover birth control and other goods is enjoyable, but to come down so harshly in a public forum against shallow, supposedly feminine interests muddies her earlier argument that libertarianism should be part of the fabric of popular culture. She’s funny, but she’s shooting her own argument in the foot here when she scorns the admittedly mockable high-heel and pricy handbag culture. I don’t like it much either, but she’s doing the cause of more libertarian ladies, please! No favors.

(To me, a more useful place to look at libertarianism, women, and pop culture might be the success of the Twilight series and The Hunger Games series. Both are young adult novels starring young women protagonists. Both are staggeringly successful and are adored by mostly young women.  Both even have a love triangle. Both are bad-to-mediocre in their writing quality, but demand that you keep turning pages anyway.

The difference between them is that Twilight is a soppy, mushy, purple-prosed tale of a girl getting everything she wants out of life (sexy vampire husband, immortality,  a child that takes care of itself) and The Hunger Games is the story of a girl who has to grow up much too fast and who is nearly completely destroyed by life in a dystopian society and the hell of war — even one of liberation. It may not be perfectly libertarian, but The Hunger Games series is pro breaking bad laws, pro fighting for freedom (but with serious questions about war and its worthiness and not being as bad as your enemy). It even explores whether political assassination is just and whether a new leader can be just as bad as the old tyrant. Heavy stuff, and yet those books have sold more than 25 million copies and teenage girls are obsessed. You want your accessible fun, libertarian messages? Give girls (and boys) more Hunger Games.)

Now, the back and forth Borowski hath wrought — Thomas Woods says yay! The Bleeding-Heart Libertarian says ugh — may be nothing more than a sign of the same libertarian squabbles of the past 50 or so years, the paleos versus the cosmos; the socially conservative versus the supposed “libertines” or hippies or what have you. But to me, the lack of women in libertarianism makes this a more interesting debate than it might be.

Cathy Reisenwitz of Reason offered her own response to Borowski’s video, and it’s, shall we say, cosmo-friendly in two ways. It’s opposed to slut-shaming and is pro-expensive handbag and I don’t really have an issue with it, only that she has continued what Borowski started when it comes to dancing around a point, but not getting to the heart of the question of where are the libertarian ladies.

Borowski and Woods and other’s basic premise that one can be a libertarian and a personal social conservative is one with which I strongly agree. It should be obvious. Other the other hand, the more paleo types have a habit of using words like “libertine” to describe anything outside of their conservative comfort zone. That is lazy and insulting, and is utterly lacking in nuance. It turns off those of us in the gray middle.

On the other, other hand, Reisenwitz may be overstating the joys of casual sex for all ladies in her video, but the libertarian answer to this should simply be a free market in all goods (handbags, etc.) and birth control available over the counter. Simple, the liberals would be happy, and the amount of sex anyone has would be their business, period. Reisenwitz ends with “Libertarians love sex and expensive handbags.” Libertarians are pro sexual freedom and pro free markets, so in a sense that’s true, but it’s also an imprecise summary that mirrors the same problem that Borowski’s video has. My problem with both these videos is that they are talking about bite-sized issues and they are both alienating to their fellow potentially middle-road libertarian women  (to say nothing of those still unconvinced by libertarianism).

Aesthetic issues are important to people, if not to libertarianism. I had paleo-libertarian friends who were annoyed when my former boss Nick Gillespie wrote about a transsexual woman in a beauty pageant. Is that relevant to libertarianism? No. Is Gillespie obligated to pretend that he is not pro gay rights, or pro transsexuals  or pro beat poets? No. The highest issue is whether the state should be involved in something or not, but individuals are not obligated to keep their personal opinions secret. This is a small, yet frustrating chunk of the great paleo vs. cosmo debate, but it seems to provoke the same conversations again and again. If the two camps are going to argue, let them argue about whether just wars exist or something substantial. Once and for all, the social conservatives are alienated by the “libertine” cosmos, and the cosmos are annoyed and turned-off by Christian shaming or a lack of love for rock and roll. We should be able to move on from that and agree with the basics of libertarianism, but Borowski and Reisenwitz’s videos show once again that we just can’t seem to.

I am glad to debate Cosmo and high heels and sexual libertarian or lack thereof, but it’s frustrating that both these ladies, who I admire and respect, have missed the bigger picture. (Besides more Hunger Games), what we need is to counter the idea that liberal ideas of legislated “fairness” and “equality” are the only ways to be emotional and caring. Women are supposedly more about emotions, even when it comes to the political realm. Furthermore, they are thought to be turned off by the stereotypical libertarian male who is awkward, creepy, or worse still, downright cold and callous about the poor and disadvantaged. Free markets themselves are of course thought to be the domain of the monocle-wearing fat cat. There’s a lot of reputation-changing that needs to happen.

An understanding of the basic benefits of free markets is essential to be a strongly-committed libertarian. And the right for any individual to be a selfish, uncharitable asshole is a right that is rarely defended and is also essential. Still, what libertarians need to do more than debate handbags is to counter the liberal propaganda that to care about other people is to legislate benefits “for” them.

GMU professor Bryan Caplan argues that it’s “inherently difficult to sell libertarianism to a Feeling” person (which women are much more likely to be). Why? Maybe a Feeling person is less likely to be a committed economist, but libertarianism doesn’t need everyone to be as smart as Caplan, Woods, or Borowski or Reisenwitz in order to catch on. Freedom just needs to be seen in a different, more positive light.

Why can’t freedom be fuzzy and emotional? Why can’t it appeal to all these soft, caring females? The drug war, crony capitalism, two million people in jail in the U.S., war itself, small businesses being crushed by bigger or more favored ones who have government help; taxi cartels, laws against treehouses and gardens in your homes, the racism of the justice system, the death penalty, etc. There are scores upon scores of libertarian issues that are more accessible to the average person than the quantitative scribblings of the dismal science or “letting the poor starve.” All of them could get right to the heart of people who, bless them, often do care about fellow humans and about injustices. Libertarian women (and men) should simply work on countering this idea that government-mandated fairness is kinder or gentler than freedom.