This graph, which shows how stupid America is, was recently retweeted by journalist Glenn Greenwald. 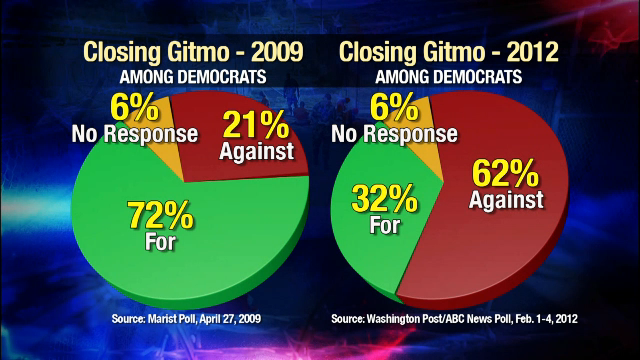 It’s a great, damning graph; two piecharts taken  from a televised news report show how partisan and principle-free are Democrats. The problem is it’s not actually real. Intrepid editor Lucy Steigerwald looked through the source of the poll and found discrepancies with the graph’s supposed numbers.

Glenn Greenwald, a noted Guantanamo opponent, likely knew that outrage over the prison among Democrats had diminished. So without looking up the actual numbers, he retweeted the graph. This is confirmation bias, and it’s easy to fall into its trap, especially on social networking sites like Twitter. Sadly, the real numbers are actually very close — close enough for it to seem strange why someone would go through the trouble to fake a graph like this in the first place.

The actual Washington Post/ABC poll shows that 70% of all respondents favor leaving Guantanamo Bay open. Furthermore The Post revealed that 53% of self described “liberal Democrats” and 67% “moderate or conservative Democrats approved.

Although the numbers from the graph aren’t accurate, they are close enough to make you wonder what the hell Americans are thinking. When Obama promised to close Guantanamo Bay by 2010 he had a lot of support amongst his constituents. A 2009 Marist poll of Democrats showed 72% favored closing Guantanamo. During his 2008 campaign for the presidency, Obama constantly referenced how he would close the prison if he won the election.

It’s 2013 and Guantanamo still holds 166 enemy combatants. Obama has talked a great deal about his desire to close it down, but shown little real interest and has taken no action on the matter. The lack of interest has sparked a sea change in the opinions of Democrats and they have abandoned their once hardline stance and now stand firmly behind their Commander in Chief.

And this is what’s wrong with America.

It’s funny how a change in the party running the White House can make such a big difference in the principles of the American people. When President Bush was in charge, Democrats couldn’t wait to close down Guantanamo Bay. It was a place which ruined America’s image and embiggoned our enemies abroad. But now Obama is in charge, he can spew empty promises about how he “wants” to shut it down, but why should he? He no longer needs to placate the people, their hearts and minds have changed. It’s a win-win for Obama and a lose-lose for America.