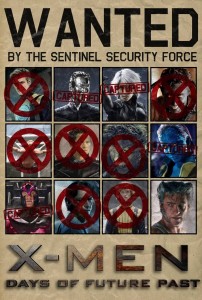 Okay maybe guest blogger Todd Seavey didn’t stick to the Tuesday Apocalypse theme, but if we can’t go off theme at a libertarian/anarchist blog, what good is having an anarchist/libertarian blog? Seavey is a great writer, so we let him go on a nerd journey about some of the new X-Men films. The Stag Blog welcomes submissions on any and all subjects — including delicious nerdery. Check out below for links to some of Seavey’s other works. — LS

Word is that 2016 will bring the film X-Men: Apocalypse, set in the 1980s and featuring the centuries-old, conflict-creating, villainous, Egyptian mutant named Apocalypse (and perhaps a teenage version of X-Men team member Storm, back in her days as a street thief in Cairo?). This is just one of several reasons I can confidently predict that this year, in the film X-Men: Days of Future Past, the X-Men timeline will be rebooted (a la J.J. Abrams’ relaunch of Star Trek). Every X-Men film you’ve seen except for 2011’s X-Men: First Class will be erased from the fictional timeline at a theatre near you one month from now, mark my words.

But why? Well, when Star Trek, Star Wars, and Tolkien all went the prequel-film route, those franchises got worse. X-Men, by contrast, arguably gave us the best entry in the whole series with the swingin’, James Bond-influenced X-Men: First Class, directed by Matthew Vaughn. James McAvoy and Michael Fassbinder were as engaging, in their own way, portraying the 1960s versions of heroic Professor X and anti-heroic Magneto as Patrick Stewart and Ian McKellen had been in portraying the aged, present-day versions of the characters in the other ensemble X-Men films. More important: McAvoy and Fassbinder’s contracts weren’t about to expire, as are the contracts of many of the Stewart/McKellen ensemble.

Rumor has it that Fox had long had its doubts about whether the unwieldy, megastar-filled cast of the main trilogy of X-Men film was worth the trouble of paying and scheduling, especially given what a small portion of the general film-going audience can keep track of all those mutant characters. The tortured one-on-one relationship of McAvoy and Fassbinder is easier to do — and Mystique, the shapeshifter mutant for whose loyalty they’ve battled, is played by Jennifer Lawrence, suddenly a big star in her own right. Why not focus on these three?

But first: this year brings X-Men: Days of Future Past, with a great built-in excuse for starting from scratch at film’s end. The whole plot (which was not conjured up just for the strategic purposes I’m describing here but was genuinely derived from a classic story in the original comic books) revolves around the Stewart/McKellen versions of the characters using time travel to prevent an apocalyptic war between mutants and humans circa 2023 — by teaching their younger selves (McAvoy and Fassbinder) to be peacemakers instead of warriors. Clearly, it’s easiest to end this film with a clean slate, back in the 1970s, and just proceed with McAvoy, Fassbinder, Lawrence, and whatever fresh, young actors we choose, leaving Halle Berry and other potentially-pricey old cast members to exit with dignity.

The fact that 2016’s X-Men: Apocalypse takes place in the 1980s, then, strongly suggests that from here on out we’ll just keep moving forward from the newly-improved 1970s. That means Stewart et al — and the five films in which those actors appeared — will no longer be the foregone conclusion to which the franchise is leading. From here, it’s just First Class (which took place in the ’60s, remember) and forward. New viewers looking to save time can skip all the rest. It makes everything so easy! (Though admittedly having a major film franchise stuck in the fictional 1980s is a bit odd — not that you’ll hear any complaints from this Duran Duran fan).

The fresh start would also make it easy to ignore/erase the multiple continuity errors that the series has accumulated by skipping around to different eras (even before the time travel-themed film comes out on May 23), nitpickily cataloged by io9 here (though I don’t think any of those are impossible to reconcile). To avoid creating new continuity errors, though, let us just hope they remember in X-Men: Days of Future Past to show the 1960s Wolverine with bone claws, since he didn’t get laced with metallic adamantium until 1979 (as depicted in mediocre X-Men Origins: Wolverine).

You can catch guest blogger Todd Seavey talking about similarly nerdy things on this YouTube channel, his personal blog, the libertarian pop culture site LibertyIsland, and, on April 18, 2014, live and in person onstage in New York City as part of a comedic panel discussion (details of which will be announced on the aforementioned blog shortly).