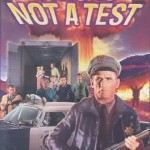 This Is Not a Test (1962), directed by Frederic Gadette: This is a strange, low-budget, grim little movie. A cop who progressively becomes more and more creepy stops a few cars full of people in the hills above Los Angeles. The missiles (The Missiles) are coming, and they’ve got to prepare. Most of the characters are unlikable, as they include a murderous hitchhiker, one of those tediously self-sacrificial elderly characters, and the scary policeman. Oh, there’s also a woman who randomly cheats on her husband before the end. Basically, after yelling and flailing, the plan becomes let’s all secure this supply truck as much as possible, and hide in the back. The police officer gets more and more nuts, and the rest of the folks kick him out. The young and in love couple head for the hills, leaving behind grandpa. It’s supposed to be real people in peril, and perhaps it’s so realistic as to be unpleasant. Or it’s just not very good. The scary highlight is snatches of radio reports from the cop and other motorists’ radios. As is so often the case. 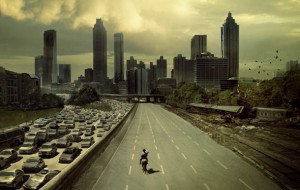 “Days Gone By” — The Walking Dead pilot: I long ago lost track of this show, having left it behind during the end of the God-awful second season of sniping. I may or may not ever pick it up again, though I’ve been meaning to read the comic for ages. Regardless of everything that came after, however, this is a hell of a pilot. Pilots are naturally awkward, much of the time — characterization and usually everything else is off. Even half-decent ones are still inferior to what came ever: The X-Files putting a much more timid Scully in her underwear for borderline-gratuitous reasons comes to mind. But, ah, The Walking Dead knew how to start things off, even if it didn’t know much of what else to do. Sheriff Rick Grimes gets shot, ends up in a coma (poor showrunner had to defend the coma thing, thanks to 28 Days Later), and wakes up three months later in zombie land. (Meanwhile his annoying best friend, wife, and child are busy being alive. Whatever.)

The scenes of Rick waking up in the hell of the abandoned hospital; the barricaded door with hand reaching; the camera pulling back and showing more and more body bags in the parking lot — they are morbid perfection. Hell, I’d almost argue that the show went downhill the moment Rick meets the half-destroyed, crawling “Bike Girl” zombie. Except, no it didn’t, because there we get to see Rick’s complete horror, bordering on a conviction that he is still asleep, because he has to be. I love when heroes, especially male heroes who have been strong in their earlier lives, need a moment to gather their sanity while dealing with the new world around them. The rest of the pilot has great detail, and good characters. Rick hides with the dude from Jericho who isn’t Skeet Ulrich, and zombies claw at the windows, and things become more horror movie familiar. You get that amazing shot where Rick is riding his horse towards the dead city, with cars that were fleeing all piled up his left (where is that show? I want to watch the show on the poster). It’s all so good, and then it ends on a cliffhanger where Rick is about to met all the annoying people who made the show the worst. 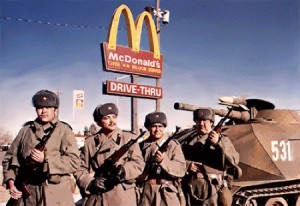 Red Dawn (1984), directed by John Milius: I first watched the ’80s epic when I was 14, and though I saw the potential camp value, it was a little too violent and its ending a little too bleak for me to really feel the joy of it. Plus, C. Thomas Howell, man, I thought you were Ponyboy, sensitive greaser cleaning up the broken potential-shiv from the parking lot so nobody punctures a tire. This C. Thomas Howell whose hate for the Ruskies keeps him warm is a little too much for me.

Successive watching has made me appreciate this movie for the historical document it undoubtedly is. Every then-relevant ’80s teen together in the Rockies clutching firearms. Also, Powers Boothe is there. A vital lesson in guerilla tactics. Oh, right, it’s totally about the Mujahideen in Afghanistan. Awkward in the most fascinating way. Is it a conservative wetdream, or a secret bit of satire? It is all things.  It is idiotic, and it still a little disturbing.

It’s so stupid, and so unlikely, and on 9/11 — before I saw this movie, I think — I had a brief moment of imaging some imminent invasion, and all of rounded up into camps. Here you can almost get into the spirit of the horror of an invasion — the opening scene of the parachuters coming to the school, and then our heroes fleeing the town is cheesy, but not enough to escape its unsettling quality. Some of the violence is both campy and vaguey disturbing for what it suggests. I have never been able to fully laugh at most disaster movie violence, even when I know it’s funny as hell.  The group of patriots being gunned down while they sing the National Anthem comes is absurd, but reminds me of actually horrific scenes in other, real movies. Patrick Swayze and Charlie Sheen’s father yelling “avenge me!” like an angry ham is hilarious, but then Swayze gives his all, bless him. Nobody told him what movies this was. Nobody told any of these people how funny, dated, and awkward this movie was. (“Wooooooolverines!”) Everything about Red Dawn both mocks and endorses the most terrified of Cold War feelings. This movie is so weird, and it gets weirder all the time.

“London Calling” by the Clash: Stop pairing this in cheesy, cheery teen movies and sitcoms with your 7-10 shots of London that you purchased to prove that the characters are totally going to England. This song is about the apocalypse.

London is not calling you because you are going to have a super cute time “across the pond.” It is calling because it is drowning, and did Joe Strummer’s weird shrieks not hint to you that something has gone seriously awry? Even Paul Simonon’s bassline is menacing. It is wonderful.