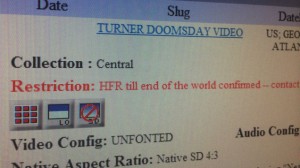 Jalopnik has the skinny on the video that Ted Turner wanted played before the apocalypse. Spoiler alert, is an Army brass and woodwind band playing one version of “Nearer My God to Thee.” That sounds inane, or a little too close to the maybe-apocryphal Titanic band’s choice of last song. However, if you have any spine-chills available for this kind of mood-piece (and I have it in excess), you should watch it all the same.

My favorite quote from the entire piece is in the image to the right: “HFR till end of the world confirmed.”

So modest, funny, and unnerving.

Even though the video is so insubstantial — though its simplicity, and its analog quality makes it appear to have crawled out of end of the world ’80s classics like Miracle Mile, Testament, or Threads — it has a creepy quality of belonging in two worlds. It’s a more true version of when real newscasters have bits parts in apocalypse or alien invasion films. Instead of imparters of fact playing a part, the video is the real real world playing at something that — thankfully — hasn’t happened yet, and so remains the stuff of nightmares and fiction.

I wonder if any other networks have such a thing on standby. I keep picturing Ted Turner planning this out late one feverish night after a bad dream.

Simply because I was only a toddler for the end of the Cold War, I cannot tell how true this idea of apocalypse in the air was; whether kids really thought they wouldn’t grow up; whether everyone was damn sure the big one would be dropped at some point. I can’t tell, because I wasn’t there for all intents and purposes so I can only trust a narrative, and a simplification. And because the simple version is, we all thought we were going to die from the bomb, and then in the world of This Bike is a Pipebomb, “everybody just forgot about it.” (As I read today, one reason the Bulletin of Atomic Scientists objects to the Manhattan Project National Historical Park is that is plants the threat of nuclear weapons as squarely in the past.)

Tell me how it was, readers. And tell me if you know of any other network or media versions of this CNN apocalypse video. I want to collect them all, like the morbid, gasmask-collecting lunatic I know I can be.