Photo of the Day: Punks Burn the Flag Lady Thursday: Old Timey Young Adult Heroines Are Not Just Like You (Except When They Are)

Welcome to The Stag Blog’s series dealing with portrayals of the end times in movies, novels, docudramas, documentaries, instructional pamphlets and films, songs, and memories. The focus will mainly be on nuclear fears during the Cold War, but we will also branch out into some asteroids, aliens, or plagues. Let’s keep it loose.

Guest posts are particularly welcome on this subject — give me your best nuke movies, your memories of hiding under desks, or your childhood (or adult) worries about alien invasion.

Today I wrote four mini reviews of two books and two movies  — they cover nuclear war, alien invasion, a vampire plague, and a comet. All four of them are worth three out of five stars, worth reading or watching, but ultimately sort of unsatisfying. Post your howls of outrage in the comments. 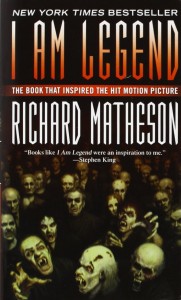 Though I am a good Twilight Zone fan and Matheson wrote some of my favorite episodes, I learned about the ending in the original novel through a Cracked.com list some years ago. This, contrary to the half-assed 2007 Will Smith movie (which started quite good), is that (spoilers) Robert Neville, the vampire slayer hero of our story has turned into an ironic villain once he is the new minority in vampire society. One of the novel’s high points is that Neville is well aware of how darkly amusing that is, and even dwells on it before he dies.

Though the novel has good details of the zombie-vampire plague, and describes the monotony of Neville’s life so well that it is almost a fault, something about it remains unsatisfying. Its scope is so limited, and every chapter and section seems to end with Neville getting smashed, then restraining himself from running outside to feed himself to the vampires. The whole thing is clearly influential in terms of both vampire, zombie, and post-apocalyptic fiction, but that doesn’t mean it hasn’t been done better in later works.

Also, apparently the various loose movie adaptions all changed Neville to a scientist. That would make his autodidactic solving of the plague’s mystery a lot more believable. I can’t quite buy how in the book Neville seems to have begun his task with no scientific knowledge at all.

Oddly enough — if only because this feels very Hollywood — the most emotionally powerful bit is when Neville finds the stray dog, and when he loses it again. His desperate hope, and his careful patience in building up the dog’s trust, only for it all to go to hell at the end, is one of those perfect apocalypse fiction moments. Neville’s tiny interactions with the dog are more moving than the destruction of the whole damn world. 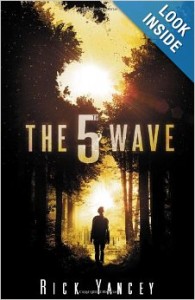 This is a YA (that is to say, for teens more or less) novel that starts off feeling new and terrifying, but gradually goes downhill once the plot starts moving. This is the story of Cassie Sullivan, a 16-year-old who is alone and surviving on an earth that is nearly extinct of real humans. An alien invasion has brought “waves” of attack that began with an EMP attack that disabled all electronics, and has culminated in extraterrestrials who look a lot like humans roaming the countryside. The final twist — the title reference — is that aliens have managed to trick the survivors into picking each other off through paramilitary training.

The opening scenes are phenomenal in their bleakness; Cassie and her father walking home from school after the EMP, the plague that kills her mother, the mysterious army of apparent survivors who move in to eliminate a refugee camp, the simple fact that the alien ships spends a week in utter silence, lurking above the earth, when they first arrive — there is some great stuff here. I read it all with an unpleasant feeling in my spine, which is all I ever want in such works.

And that it goes all YA-ish. As a character, Cassie has to walk a careful line between credible teenager that was, pre-invasion, and current grim survivor in a new world. And she does more or less. But the mandatory trimmings of a love triangle and an attractive young man who isn’t who he seems don’t pack the same weight as the opening chapters of horror did. The plot really gets going when Cassie begins her quest to free her little brother from alien captivity, and though there is no reason to believe that the aliens would be flawlessly competent, it seems like they should be able to counter Cassie and friends’ revolutionary actions a bit better. The book also drags when it leaves her head and enters that of the other two members of her unfortunate triangle.

Things pick up in the final after a draggy second third, but I was almost disappointed to learn this was just part one of a planned trilogy. I rather liked things ending with a moment of quiet relief for our survivors, but with the overriding knowledge that humans are completely fucked. 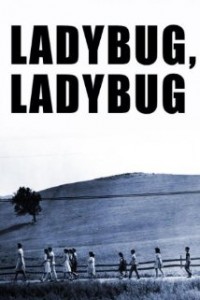 This small Cold War panic film waffles between righteous antiwar flick and precious propaganda. The plot is simple: an alarm is tripped at a country school (filmed in Pennsylvania) and a few phone calls by teachers and the principal (played by Mr. Feeney from Boy Meets World, FYI fellow-millennials) suggest this may not be a drill. The teachers are told to walk the students home in groups, and that’s the whole thing. Some of the kids are unafraid. Some are deadly seriously and slightly too well-spoken. A female teacher stuck in heels for the long walk is not comforting; the fear in her eyes shows. The groups get smaller and smaller as kids go home to tell their doubting parents what has happened.

The cinematography is lovely and menacing. The acting is occasionally a bit theatrical and 60s-earnest, but everyone (the kids are mostly amateurs) carries it as well as could be expected. The dialogue is hard to trust as really realistic, except when I remember how everyone claims kids during the Cold War used to say “if I grow up” not “when.” (Remind me to check on the realness of that.)

A highlight is the completely heart-breaking moment when a little girl runs home to tell her mother about the alarm, and she is dismissed. Mom is a completely believable, harried, old-school mother; her daughter is a believably desperate little kid who just wants the older people to understand what is happening. It’s a basic, banal conflict, except that the stakes are apocalyptically high.

Things peter out a bit when the alarm is revealed to be a mistake (probably). The moody conversations during the students’ long walk don’t have the same terror then. The confusing and ambiguous ending is also unsatisfying. I like question mark endings in terms of Lost in Translation or Jim Jarmusch pictures of humanity that leave people after spending a while with them. But I prefer to know whether a nuke was dropped on some children or not. 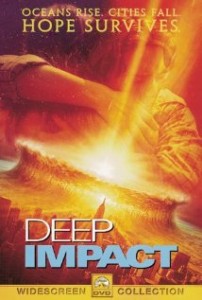 Oh, the warring comet movies of 1998. In some ways I should just embrace Armageddon for its unsubtle, Aerosmith-sountracked picture of Bruce Willis saving the earth. But Deep Impact is better and worse of a film, in that it manages to provoke some human feelings, but it still wallows in disaster movie absurdities.

Ever since I was little, I was disturbed by scenes of panicked masses in movies. Even in movies I knew were cheesy, I was troubled by the unhinged hysteria and the general trampling each other bits of humanity. Deep Impact has those action-packed scenes, but it has something worse — it has waiting. In fact, most of the movie is about waiting for the end. And that is the most disturbing part about the anticipated apocalypse, trying to figure pit how to live while it inches closer (this is why On the Beach is so good).

The movie follows three main stories: Elijah Wood as the youth who first spots the comet; Tea Leoni as the reporter who breaks the story (this is the only film in which I have ever liked her, maybe because with a bob and a character profession as a cable news reporter, her stiffness magically changes into hey, she’s my old journalism adviser who used to work for CNN!); and finally, the least interesting, the team of astronauts who are going to save us all from doom. The movie also includes the gravitas-tastic Morgan Freeman as the president, with various side characters.

I don’t know that I could defend the whole movie — certainly not Elijah Woods’ last minute, highly bullshit efforts to rescue his ladylove Leelee Sobieski. Except that the moment where Sobieski’s parents put her on Woods’ motorcycle, pass her her little sibling, and basically pry her fingers away as she hysterically says “I’ll see you soon” is lovely and gets me in the gut every single time. As is the moment when the parents, instead of fleeing in vain from the comet-made tidal wave, just turn and smile into each other’s faces at the end.

Less effective, but still powerful is Leoni’s characters’ end. And there are the visuals — the last-minute helicopters in the sky over New York City; the crowds of hysterical people trying to enter the sanctuary of the caves (though in real life I think there would be a lot more soldiers machine gunning people)… and they all work too well for something so popcornish. They have no business working at all in a cheesy, impossible action movie. But they are like the extras and the secondary characters in Titanic who act circles round the main characters and the tedious love story plot. They give heart and stomach-churning anxiety to what may be a crap movie in the end.

Half-good movies are more frustrating than entirely awful ones. But halfway good movies can still raise a chill and make me think about how people spend their last moments before the end of either their world or the world entire. Deep Impact does this, and that’s not bad for a summer thriller.