The Little Libertarian That Could, or, How I Learned to Stop Worrying and Start Winning Single-Issue Elections Tuesday Apocalypse: “Great Atomic Power” by the Louvin Brothers 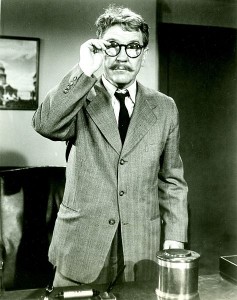 Welcome to The Stag Blog’s new series dealing with portrayals of the end times through movies, novels, docudramas, documentaries, instructional pamphlets and films, songs, and memories. The focus will mainly be on nuclear fears during the Cold War, but we may branch out into some asteroids, aliens, or plagues. Let’s keep it loose.

Guests posts are particularly welcome on this subject — give me your best nuke movies, your memories of hiding under desks, or your childhood (or adult) worries over alien invasion.

This week, I was planning to write about On the Beach — the original movie, and maybe the novel and the 2000 remake in passing — but instead I thought I would talk about two Twilight Zone episodes that deal quite differently with nuclear annihilation. Be warned, I had many classic Twilight Zone episodes spoiled decades ago by many classic Simpsons Halloween specials, but I’d rather not be the ruiner of even 50-year-old TV shows.

Forgive the lateness of the hour, but remember the Andy Warhol joke about going to Pittsburgh in the event of nuclear war — everything, you see, comes to Pittsburgh five years late.

You know this one, or you know a parody. This is one of the most famous Twilight Zones — maybe the most famous not starring William Shatner (who was actually in two episodes, on a sidenote!). This is the story of poor bank teller Henry Bemis (Burgess Meredith) who seems good-hearted, if frustratingly absent-minded, and is the world’s biggest bookworm. A bookworm, but nobody in his life will let poor Mr. Bemis read. His boss’s scolding is one thing, but Bemis’ wife, portrayed with oddly-masculine coldness by Jacqueline DeWit, is simply sadistic. Who did she think was marrying, if not a be-speckled Burgess Meredith who only wants to lose himself in Dickens, poetry, and any other literature? I don’t think her husband was ever a dynamic, suave individual. Her fault, then, if she’s now unhappy. Indeed, you could write a whole story about Mrs. Bemis and what made her so cruel. The scene where she pretends to be interested in her husband’s poetry book is her peak of small, but sharp horribleness. The fact that he really believes she might be interested after God knows how many years of marriage is a testament to his infuriating fuzzy-headedness, perhaps, but his face when he sees what his wife has done to his book — blacked out every single word on every page — breaks the heart.

That scene is why the most upsetting part of this episode is not the destruction of everything. Yes, Mr. Bemis goes down to the bank vault and therefore survives what seems to the end of the world (though there must have been a few more people going into basements at just the right moment). The empty, H-bomb-wrecked world is a little tidy in it’s carefully-placed rubble, like a film set. But the producers did well for the times. It looks pretty bad, it looks well and truly destroyed. And Bemis has been portrayed and remembered and parodied as a character who is bothered by all the people around him, but he doesn’t suddenly adapt to this new, empty world. He is after all not really an introvert, so much as someone who needed time to read, and then meet some folks who shared his love of books. Didn’t they have book clubs in your time, Mr. Bemis?

Anyway, Bemis tries to cope. He talks to himself a little, finds some food, and mourns. Eventually, he very nearly commits suicide. With a pistol to his temple he tells himself he’ll be forgiven, considering the circumstances. Then he sees the books in the ruined bits of a public library! Suddenly it’s all turned around! After a few minutes of hopeful scenes where Mr. Bemis gathers enough stacks of books to keep him going for the next several years (assuming that rain and snow has stopped existing; find some shelter, Mr. Bemis), we get to the final, oft-parodied scene where Mr. Bemis breaks his glasses. In my case, breaking glasses would hinder my survival, but not my ability to read. Still, Bemis is probably doomed now. But worse still, it’s not fair. There was time now!

There is often justice in the twilight zone, but not always. Mr. Bemis didn’t deserve his fate, but irony chose him.

And the nuclear destruction is only incidental. The real tragedy is that what he asks for is so simple, and he doesn’t get it.

But at least his horrible wife is dead, I guess.

Third From the Sun, season 1, episode 14

Since the twist in this episode is much less commonly-known, I will again warn that readers wishing to remain unspoiled should proceed with caution.

I’m a connoisseur of well-crafted dread in movies or television that deals with subjects as heavy as nuclear war or worlds’ ends. It’s only so-so for most of this episode, perhaps because the character mostly speak of feeling it in the air. There’s a lot of tell, and the show of it is confined to Dutch angles and tight shots on nervous faces. It’s not unsubtle, but since the plot is fundamentally horrifying, I demand nothing less than soul-crushing. And it’s just not that. (Maybe the Richard Matheson short story it’s based on is that — I’d like to read it.)

The main character in “Third From the Sun” is Will Sturka a father who works at a military base on horrible weapons; we also see his wife, his teenage daughter, and a couple where the husband, Jerry Riden, works at the same plant, but on a secret spaceship. The antagonist is the boss,Carling, who seems to be a true-believer of striking first and watching what you say and think in such times as these.

What times? Well, the end times. Or nearly. Sturka and Riden know it’s coming. They plan to gather their families and flee. Their cover is an evening card game, during which Carling stops by briefly. Then there’s a whole lot of charged dialogue where everyone knows everyone else knows, but nobody says anything. Carling leaves, and the two families head for the base to steal away on the craft Riden has been building. At one point we learn that there has even been talk of other planets that contain people not unlike our characters. Riden and Sturka and their families hope to head for one.

When they reach the base, Carling is there — naturally — but the teenage daughter actually helps to save the day by smacking him with a car door.

We see that the ship looks an awful lot like a UFO, and we either get it now, or we don’t. The final shot is Sturka and Riden discussing how the ship is holding up (well), and if they can really image that there are people like them on this distant planet they’re flying towards. It’s third from the sun, and it is called Earth.

Is this a throwaway, “he was dead the whole time?!” type of ending? Perhaps, but no more than other Twilight Zones, which often dealt with the question of who was the real alien in various scenarios. (Man is of course, the real monster in all cases.) And in a greater context of Cold War terrors, it strikes a more effectively sinister note than all previous dialogue about man destroying man, and all the fear in the air; because if the same insane scenario of weapons build-up and worldwide suicide is happening on this other planet, what hope is there for little old Earth?

Walter M. Miller’s brutal and wonderful A Canticle for Leibowitz says humans will utterly destroy themselves not once, but over and over again through the course of thousands of years. With its twist ending, the more flawed but still thoughtful “Third From the Sun” suggests the same pattern can repeat across the galaxies. So much for Klaatu or other aliens coming to save us from our deadly impulses. Things are just as bad up in the stars.