Why You Can’t Do Anything About Global Warming, in One Graph

This chart represents bad news for American’s who are worried about global warming:

That blue line with its scary upward rise represents China, the earth’s leading producer of CO2 emissions, and it’s projected to keep on growing. The bad news is if carbon emissions  are solely responsible for anthropogenic global warming, then there’s nothing you the American consumer can do about it. The good news is you can buy that super low gas mileage muscle car you’ve always wanted, because guess what — your efforts to reduce your carbon footprint are wholly and completely irrelevant. Now just because China and India will continue to make all of America and the EU’s carbon reduction irrelevant doesn’t mean you should stop recycling, or not cranking up the AC in the summer, or riding your bike to work. Pollution is still a real problem in some parts of the United States. Just remember, when you’re out there biking in 3 degree weather to save a few emissions, feeling good about yourself and your carbon reducing ways, you’re literally doing nothing to reduce global warming. As John Stossel so succinctly puts it:

What we do now is pointless. I feel righteous riding my bike to work. That’s just shallow. Even if all Americans replaced cars with bicycles, switched to fluorescent light bulbs, got solar water heaters, etc., it would have no discernible effect on the climate. China builds a new coal-fueled power plant almost every week; each one obliterates any carbon reduction from all our windmills and solar panels.

I know what you’re thinking, “a full blown invasion of China is the only way to stop catastrophic global warming.” But I’m going to have to stop you right there. That strain of thinking can only lead to the most famous of all classic blunders: Never get involved in a land war in Asia. To say nothing of the horrific death toll and the moral and philosophical problems. The developing world, especially China and India, is going to produce a lot of emissions as they grow into a fully developed and modern economic country. The good news is that once they reach that point, carbon emissions will likely flatten out. Much like what has happened with OECD countries like the United States and the members of the European Union.

Contrary to the mass hysterics of the Al Gores and Barbara Boxers of the world, who can’t wait to blame every deadly storm on global warming, there’s plenty of new evidence that shows that warm temperatures result in fewer severe weather events. (Read the abstract here.) And of course there’s Al Gore’s “scientific” “predictions” in his magnum opus Inconvenient Truth, that have been spectacularly wrong so far. Let’s take a deep breath and remember that mass predictions of Armageddon don’t usually come true; human ingenuity is rarely factored into doomsday scenarios.

Even though 97 percent of climate scientists believe that global warming is anthropogenic, not all scientists subscribe to that theory. Fortunately, even if global warming is caused by humans, there are still scientists that believe that the whole thing is overblown and that the Intergovernmental Panel on Climate Cchange is a joke. Then there’s the 15 year pause in global warming that no one can figure out. The problem is, If global warming is as catastrophic as the doomsdayers want to believe, then we’re all screwed anyway. Worldwide emissions have already blown past the 350 parts per million threshold, IPCC head James Hansen’s so-called tipping point. The developing world isn’t going to shut down their economies just because we ask. And any self-imposed pollution limits from the US or the EU will have little to no effect on worldwide emissions.

So what do we Americans do? First off ignore people like Eugene Robinson, who right after admitting that China and India aren’t going to actively reduce their carbon emissions in a way that hurts their economies, stumps for the “United States, Europe and Japan [to] do what they can, at the margins, without surrendering the comforts that industrialization provides.” Then purge from your mind United Nations climate chief Christiana Figueres, who thinks that communism is our only hope (which sort of ignores the whole China is a communist country yet the largest producer of CO2). Instead, maybe take a page from John Stossel and not worry about things completely beyond our control:

Someday, we’ll probably invent technology that could reduce man’s greenhouse gas creation, but we’re nowhere close to it now. Rather than punish poor people with higher taxes on carbon and award ludicrous subsidies to Al Gore’s “green” investments, we should wait for the science to advance. If serious warming happens, we can adjust, as we’ve adjusted to big changes throughout history. It will be easier to adjust if America is not broke after wasting our resources on trendy gimmicks like windmills. […] So let’s chill out about global warming. We don’t need more micromanagement from government. We need less. Then free people — and rapidly increasing prosperity — will create a better world.

In other words, You just gotta keep livin’ man, L-I-V-I-N. If this message of doom upsets you, please share it and instruct your friends to direct all angry comments to Joe Steigerwald. You can find him on Twitter @steigerwaldino or on Facebook at the Stag Blog. However, if you’re one of those “global warming deniers,” please use it to troll your friends and relatives by posting it on their Facebook walls. 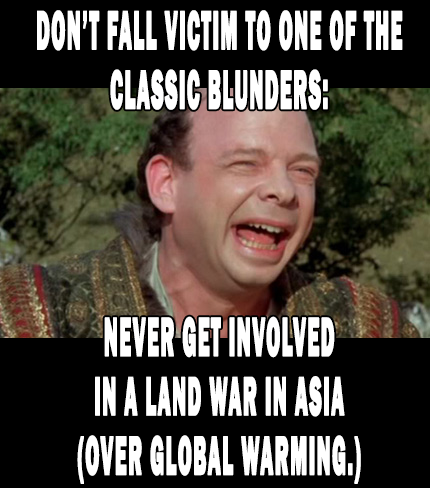