The true story of a libertarian carnivore

Twisting the title of director Frank Capra’s movie masterpiece to his own evil ends, Steigerwald and his son Joe have created  “G.P. Bear Goes to Washington.”  The 6-part serialized “docu-fable” stars Grandpa, a magical, media-savvy and proudly skeptical libertarian polar bear who understands his species is in far greater danger from the interventions of the federal government, Barbara Boxer, Al Gore, Leonardo DiCaprio and overzealous wildlife scientists than from anthropogenic climate change.

“Are we not polar bears?”

Of all the animals the Inuit traditionally hunted, Nanuk, the polar bear, was the most prized. Native hunters considered Nanuk to be wise, powerful, and “almost a man.” Some called the bear “the great lonely roamer.” Many tribes told legends of strange polar-bear men that lived in igloos. These bears walked upright, just like men, and were able to talk. Natives believed they shed their skins in the privacy of their homes.

Grandpa Polar Bear was relaxing in his easy chair watching a special news report on TV called “Plight of the Polar Bears.” As a mother bear and her cub stood forlornly on a tiny shrinking iceberg somewhere near the Arctic Circle, the dashing reporter from CNN sounded like he was going to cry.

“…. because of global climate change, polar bears are suffering population losses and may soon become extinct. Rising temperatures are melting the sea ice earlier and earlier each summer, leaving the bears less time to hunt for their primary food ­ — ringed seals. If we don’t reduce our burning of fossil fuels soon, scientists say the only place our children will be able to see these magnificent creatures will be in a zoo or in a Walt Disney movie. For CNN, I’m Anderson Cooper.”

“Don’t get upset, Dad,” said Mother, looking up from her latest copy of Reason magazine. “It’s CNN. What do you expect? Fairness? Balance?”

“What were they saying about polar bears dying, Grandpa?” asked Junior, looking worried as he came in from the kitchen with a bottle of Coke.

“Nothing, Junior. Nothing,” Grandpa grumbled. “Just a lot of make-believe.”

After dinner, Grandpa read Junior a bedtime story. As Grandpa was about to turn off the nightlight, Junior asked, “Grandpa, why do you yell at the TV? The people in it can’t hear you.”

“I know,” Grandpa said with a smile. “They live far away in New York and Washington. That’s why they don’t know anything about polar bears or the Arctic.”

Junior looked anxiously at Grandpa. “Mother said your heart will get attacked if you keep yelling at the news.”

“Don’t you worry,” Grandpa chuckled. “I just get mad when humans make us look like sissies who can’t handle a little change in the weather. We’re polar bears, for Pete’s sake. We’re not helpless victims. We don’t need the government, Keith Olbermann, Greenpeace, Leonardo DiCaprio or anyone else to protect us from Mother Nature.

“If humans just left us alone ­ and if their scientists stopped chasing us with helicopters and shooting us with dart guns ­ we’d be fine.”

“Why don’t you go to where the humans on TV live and yell at them?” wondered Junior. “Everyone always listens when you yell.”

“They wouldn’t believe a thing I’d tell them. But that’s a good idea, Junior,” Grandpa said, clicking off the nightlight. “A darn good idea. ”

“Guess what I learned today?” Junior asked as he came running in from school.

“I learned all about ‘global melting,’ ” Junior began breathlessly. “The whole world is getting hotter because humans drive too many cars. The sea ice is going to go away forever and — ”

“Whoa!” interrupted Grandpa. “Who taught you that stuff? Rachel Maddow?”

“No,” said Junior. “Principal Hansen. She came to homeroom today. Her big computer says Earth is getting hotter and hotter and Greenland is melting really, really fast. All the ice will be gone when I get as old as you.”

“Principal Hansen’s crazier than Al Gore,” Grandpa said to Mother so Junior couldn’t hear. “Didn’t I tell you that boy should have been home-schooled?”

Later that same night, after midnight, Grandpa was at his desk. He was sending his usual round of disparaging e-mails to the politicians in Washington when Junior’s cry pierced the stillness.

Grandpa and Mother raced to Junior’s bedside. Junior was crying in his sleep. “Help me, Grandpa,” he pleaded mournfully. “I’m too young to melt.”

Junior’s eyes popped open. “Grandpa! Mother! The ice was all gone! We were stuck on a tiny iceberg. The ocean was boiling!”

“It was just a silly nightmare, Junior,” soothed Mother. “The ice isn’t melting. See?” she said, patting the rock-hard wall of their cave.

Grandpa was fuming. He gritted his big teeth and looked Junior straight in his teary eyes.

“Boy,” he said firmly, “I’m going to tell you something I want you to remember for the rest of your life. We are polar bears. We are the largest land carnivores on Earth. We are the species ursus maritimus — ­ ‘bears of the sea.’ We can swim 200 miles. We can walk 100 miles a day.

“We learned how to live on this frozen wasteland thousands of years before humans discovered fire. There are 25,000 of us alive today ­ — twice as many as 50 years ago. We are not going to become extinct ­ no matter what Principal Hansen and her big computers say. Now go to sleep ­ and no more silly nightmares.”

“That was no nightmare,” Grandpa whispered angrily to Mother. “That boy’s being brainwashed by a bunch of kooks.”

“That’s all the schools teach,” said Mother. “It’s like a new religion. Every cub I know thinks the ice will be gone before they grow up. All the mothers are complaining.”

Grandpa was fuming. “Polar bears having nightmares,” he snarled. “That’s pathetic. It’s time somebody stood up to lunatics like Hansen and their doomsday stories.”

Here are Two Things You Should Do

War. Good God, y’all. Etc. Have had many fine adventures this summer, only some of which involve David Icke or Donald Trump. Regardless of that, here is the speech I gave at New York City’s Liberty Fest on September 10.

Rand Paul has virtually disappeared from the media and the polls.

Even his die-hard supporters can’t tell you what the senator has been doing or saying for the last month.

But if the presidential wannabe from Kentucky wants to return to viability — and visibility — as a 2016 candidate, he has to separate himself from the GOP’s boring herd at tonight’s debate on CNBC.

Here’s some free advice for Rand Paul from a career libertarian newspaperman: 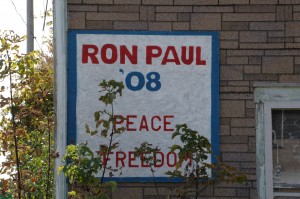 Then start sounding more like your father Dr. Ron, not less.

You need to start tapping more deeply into that young demographic that your father appealed to in 2012 merely by being his own lovable, Fed-bashing libertarian self.

For starters, and especially for early primary voters, Rand, tonight you need to begin branding yourself as an unabashed Pro Peace, Pro Pot and Pro Uber libertarian.

But boldly pushing the principled libertarian angle on peace, pot, Uber and homeschooling in Iowa would have great appeal across both parties and independents and especially among college-age voters. Plus they are strong anti-establishment positions in a year when being against the establishment is no longer a strike against you but an asset.

Being for Peace, Pot and Uber for libertarian reasons would not just be more honest. It’d quickly bring Rand Paul the media attention he desperately needs before he mounts his next filibuster.

He’d be able to separate himself from the mangy crowd of GOP establishment candidates and their tired conservative ideas while allowing himself to proudly stick up for the principles and values libertarians love and want to implement.

(Speaking of pot, our friend Matt Welch of Reason.org has a deeper, more substantive “Dear Rand” letter that urges Sen. Paul to separate himself from his fellow debaters this evening and foresquarely call for the legalization of marijuana.)

Trump, for all the dumb and dumber stuff he says, has done a huge favor for a libertarian like Rand.  Trump’s politically incorrect statements and ideas have lowered, or maybe raised, the bar on what radical things a candidate can say without being punished by the voting public or the media.

Because of Trump and his refreshing “so-what-if-I-said-something-politically-incorrect” attitude, the national liberal media, thankfully, has lost its power to destroy a candidate over a single gaffe at a coffee shop or something like Howard Dean’s scream in 2004.

Thanks to Trump, Rand Paul can take more radical libertarian positions on his natural issues without fear.

Homeschoolers, for  example, are often Christian evangelicals but they are almost all soft libertarians at heart; they deeply understand the importance of freedom from government and school choice and they have made sacrifices to practice it in their everyday lives. They should be Rand Paul’s natural constituency — not Rick Santorum’s.

Another issue tailor-made for Rand Paul is Uber.

I’m an Uber driver in Pittsburgh. I know from experience (1,700 trips, 3000-plus riders) that Uber is universally loved by young people.

It’s also a great libertarian issue because Uber’s ride-sharing business model — micro-transit at its best — is destroying the local government cab monopolies that have tortured the poor and carless citizens of every major city in North America for nearly 80 years with high fares and horrible service.

Only the bad guys hate Uber — existing taxi interests and their big-city political pals and protectors like NYC Mayor DeBlasio.

Uber is well established in Des Moines, for example. As far as I know, Rand Paul hasn’t publicized himself taking Uber rides in Des Moines or, better yet, becoming an Uber driver there for a weekend night.  Where are his campaign people sleeping?

Jeb Bush or Rubio should not be the Uber candidate; Rand Paul should be. He should own the Uber vote. Arguing with Hillary Clinton about the benefits of  the gig economy is not enough.

I’m sure others would like to see Rand Paul tear off his cheap Republican mask and unleash his inner libertarian.

Coming out of his libertarian closet tonight won’t win Rand Paul the GOP nomination or the White House. It may even lose him his seat in the Senate. But it’ll make it a lot easier for him to stand out from his fellow Republicans in 2020, when he runs against President Clinton.

Old Time Etc. With DJ Jesse Walker The DJ 1-2 by Djstaggerlee on Mixcloud

Show one, part one, check out my mixcloud for more shows.