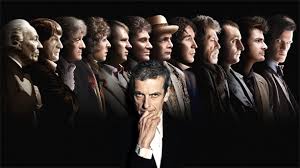 In honor of Charlie Jane Anders’ every Doctor Who episode ever list at io9, I am going to humbly approach a smaller task — ranking the new episodes. Because though technically the wise friend and her wise father who introduced me to the show did start with Three (Jon Pertwee), I have never yet had the attention span for Classic Who. Anders’ list may help me decide which arcs to tackle, however for now, I know only new.

Here we go, the top ten episodes of shiny new Who because I am way too lazy to do a count-down in reverse order. For additional laziness, multi-parters are filed under one average ranking.

We start with the best ten, and if I ever feel ambitious, I will keep on with the list.

1) “The Empty Child”/”The Doctor Dances” (2005): This was my second NuWho, and the episode that hooked me for life. A sciencey plot that is not resolved with reversing the polarity of the neuron flow, a touching exchange about WWII that I constantly cite, Captain Jack at his most roguish, and GAS-MASK ZOMBIE CHILDREN. Also the London Blitz. I love everything about this. And it’s a key one to cite when mourning the brief tenure of Christopher Eccleston as Nine.

2) “Blink” (2007): Yep, I am ranking it in the same spot as Anders, but at least I don’t have 250 episodes to compare it to. It’s just so clever — before then-writer, now showrunner Steven Moffat became too clever by half. It is the first look at a very Moffat-y beast, the Weeping Angels, before he overused them. It has a fantastic companion (as it were) played by Carey Mulligan before she hopped across the pond. It is scary, funny, and satisfying. It is overrated, except it really isn’t.

3) “The Impossible Planet”/”The Satan Pit” (2006): I never disliked this episode, but it has been slowly crawling up my favorites list over the years. Rose and Ten have great moments together, but not sappy ones. They go off and do their own thing and take their own risks, but their bond is vital. The Ood are creepy and endearing, the secondary cast are awkwardly believable, and oh yeah, space Satan? Before I read Childhood’s End, this was even more epic a concept. But it’s still epic.

4) “The Doctor’s Wife” (2011): Neil Gaiman, you beauty. This was one of the handful of episodes during Eleven’s tenure that made me keep the faith. Nothing against Matt Smith, who has some really great qualities as the Doctor, but something about the tone of the whole show was usually off to me. And Amy does nothing for me as a companion, even if she is a stunning redhead with a gorgeous accent. This episode, on the other hand, has a terrifying villain to menace Amy and Rory, and a brilliantly bizarre way to give the Doctor a chance to speak to his oldest companion — his true love (no, it ain’t River Song, damn it).

5: “The Girl in the Fireplace” (2006): In some ways I might have burned out on this episode from too many rewatches, but it really is wonderful, no matter if the characterization of our main peeps is sort of…elusive. Finally getting Mickey in the TARDIS and having him adventure with Rose gives them a chance to have some good bonding. In the meantime, there’s a fabulous French woman who might be a Mary Sue, but valiantly rises above that; there are also clockwork monsters, another wild premise that holds together until the end (more or less), and a horse in space. More timey-wimey stuff that doesn’t just feel like someone shouting at you until you are distracted.

6:”Dalek”(2005): Weak extraneous characters with hilarious John Wayne American accents. However, Nine is on fire here. One Dalek becomes more menacing than millions of them. They are the ultimate in diminishing returns. Why couldn’t the show repeat the fury and terror in the Doctor’s reaction to Daleks with any success in ANY subsequent episodes? Rose is here being important to the plot, but this is Nine’s episode.

7:”Father’s Day”(2005): Anders is right that the monsters that appear do not show up in any other paradoxical instances before or after this episode. And considering what show this is (hint: timey wimey), that’s a bit awkward. But everything else here is so damned wonderful, and it all makes so much sense as a one-shot, that I don’t care. This is a fantastic episode about idealizing people who are gone, and missing them, and things like that. Billie Piper is really wonderful, and I think a former teen pop star deserved more credit for how good she was at being Rose.

8:”Midnight”(2008): This is another one that has slowly crept up in my ranking over the years. It’s almost Donna-free, because the Doctor needs to be separated from having an ally. Multiple people over the years have suggested this is Doctor Who does The Twilight Zone. It’s a strange, eerie, mysterious plot — and the strangest, eeriest, most mysterious part (besides how Russell T. Davies could sometimes write such good episodes, when he would go nuts in every finale) is that all of the alien confidence of the Doctor fails in this case. People are not impressed by him, and they don’t magically assume he knows best.

9:”Utopia/”The Sound of Drums”/”Last of the Time Lords” (2007): But-but the ending, you cry. Yes, I know. It is not…ideal. Still, before that final twist, you have two whole episodes that are strangely disturbing. Not in the way that Moffat’s best monsters are disturbing, but in a more subtle way that lingers for longer, like everyone’s eventual demise (sorry). “Utopia” takes place at the end of the universe. It’s dying, but people are trying to take a rocket to get somewhere…else. (Something about a slapdash rocket full of refugees trying to escape the end of the universe makes me sick in an awesome way — the way really killer sci-fi is supposed to, until you put it down and watch Gilmore Girls instead.) John Simm’s turn as the maser is not as hamfisted as it becomes later. It is still plenty broad, but it balances on a perfect, genuine line between madness and evil. His wife is unsettling with her twist. His domination of the world is scary. Everything except that final bit is fantastic. And yes, that final bit is bad. But it still makes more damn sense than whatever the fuck happened at the end of “The Stolen Earth” or even “Journey’s End.” Seriously, when Davros tries to destroy “reality itself” it feels like nothing. John Simm and the taclafane are an oddly sickening nightmare that demands repeat viewings.

10:”Flatline”(2014): There is a very good chance that this episodes will be seriously downgraded in the years to come. But I feel so grateful towards it right now, that I want to celebrate it. It’s as if someone was finally listening to my mother’s complaints that aliens are too humanoid. The alienness of aliens is fully acknowledged and worked with in this episode. There’s menace and pathos, but actual slapstick that didn’t make me want to stick my head through a wall. Clara is tolerable, and almost endearing. Secondary characters are good. The Doctor is not prominent, but he’s there, and Peter Capaldi is amazing and needs more episodes worthy of his amazingness. This is the first episode since “The Doctor’s Wife” that made me go “fuck yeah, this show, I love this show!” I keep forgetting this is possible.