Friday the 13th: On Sex Workers and Solidarity 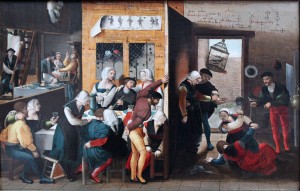 When I was 12 or 13 years old, my mother mentioned that maybe weed wasn’t so bad, and police weren’t so good. Being homeschooled by libertarians has that benefit — the lessons are subtle and everyday, and occasionally they are explicit and in the moment, quite shocking.

Since that day, I’ve written and thought a great deal about the insanity of the war on drugs and the dangerous state of American policing. But, I haven’t written as much as I should about another harmful prohibition on a natural human action — one that also leads to outrageous laws, immoral punishments, and Puritanical shaming  — sex work. When Maggie McNeill prodded me into writing a piece for her Friday the 13 support for sex workers tradition, I was again reminded that I have not done my job in covering the issue. So, though I have a little post here, my real message for today is, I will do better on this. Because it is the same issue that makes me rant 1000 times a day, to my parents, boyfriend, friends, and literally anyone else who will listen. And the same innocent people are being punished.

Drug use is easy (at least for libertarians) to defend. Depriving people of medical marijuana or prescription drugs or punishing people for their choice of relaxant — it’s seems so simple and wrong to me after almost 15 years of thinking about it. I’ve been around people smoking weed, and nothing dire happened. I can see the smallness behind the prohibition of this supposedly great social ill and that yeah, Reefer Madness is a campy movie, not a policy guidebook.

Drugs are more familiar to me (in a manner of speaking), and they can be enjoyed without any kind of ruin to health or morals. But so too can selling (or buying!) sex. Drug use is a failing and a crime, so says the right; and to the left it is a health outrage to be paternalistically — but still forcibly — remedied with drug courts and mandatory rehab.

Sex work is the same. A fallen woman or a dirty whore in the right’s eyes might be to the left a a trafficked victim, perhaps one suffering from false consciousness if she declares she choose this particular carer.

I don’t often feel comfortable wielding such a lefty, workers of the world, etc.! word as “solidarity”, but when I think of the people who “don’t count” by the standards of society and law, I feel an urge to help them. Not because I know the first thing about how they lives should go, but simply because I know that the laws that oppress them, the cops that harass them, and the rest of us who tolerate or excuse it are all in the wrong.

Chatting with Maggie McNeill and once visiting a strip club are about the extent of my personal knowledge of the world of sex workers. I don’t see the appeal of stripping, whoring, escorting, or any of that for myself. I don’t disapprove of any of it, to be sure, but even if I did, I could — and should — write this same post, knowing that my personal feelings about selling sex shouldn’t mean a damn thing to anyone.

They certainly shouldn’t mean anything when deciding national, state, or local policies. The bedroom is the bedroom, whether money changes hands or not. And pro-woman, pro-sexual freedom liberals and small government conservatives should put their money where their mouth is and realize that laws against prostitution violate all manner of their professed principles. But libertarians, too, must take more notice of this, regardless of personal feelings about the work itself.

That’s the thing — the war on drugs, the war on the homeless, the war on immigrants, the panic over gun owners, religious weirdos, right-wing and left wing activists, all of this has lead to an out of control police force, and prisons spilling over with 2 million people. All of this is excused with, well, it’s not me getting my door kicked in at 4 am over weed, it’s not me schizophrenic and afraid of the police, it’s not me who wants to homeschool my kids in Idaho while owning a few guns, it’s not me being sprayed at protests, it’s not me photographed and held for hours at my work for a compliance check performed by armed police officers, so what does it matter?

Sex workers are judged, screwed over, and oppressed. The state and the busy-bodies have decided they — like so many other eccentrics or “immoral” actors — don’t get the same rights and protections good, upstanding citizens do. Their choices are wrong. Not just wrong, but against the law. And the law is the law, as the meaningless, malevolent tautology goes. Once that is declared true, all else so painfully familiar — jailing, “saving,” shaming, and ignoring people when they do need help — follows.