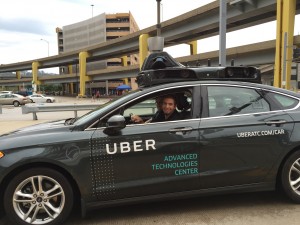 Not me, but a brave Uber “driver” in a “driverless” car.

Gizmodo’s weekend editor Rhett Jones made this childish attempt to impugn Pittsburgh Mayor Bill Peduto for having the brains to welcome Uber to Pittsburgh, for 80 years the worst taxicab town in America.

Here, as part of my unpaid media crusade to defend Uber against its moronic “progressive” enemies, is my comment, which Gizmodo’s child editors did not see fit to approve:

Pittsburghers were abused for 80 years by a regulated taxicab monopoly that offered terrible “service,” charged some of the highest fares in the country, wouldn’t go into poor or black neighborhoods, refused short trips, put decrepit and smelly cabs on the street (used cop cars and ex-NYC cabs with 200k miles on them). The cab monopoly’s politically connected owners got rich.

This horrible cab system was set up by bad state laws that were written to prevent new cabs from starting. (Black people here invented Uber 80 years ago because they had to — older men with big cars that served their community tenderly; they still do and Uber is no threat to them. Jitneys were completely illegal; everyone knew it but cops and regulators left them alone because they served poor people in ways the taxi monopoly did not and could not because there were so few cabs.)

Pittsburgh in the mid 1990s had the fewest number of cabs per capita than any major city. The Yellow Cab monopoly that existed for 80 years would still exist today if Uber hadn’t come along and, as commentators below point out, saved the people of Pittsburgh and given them reliable, plentiful and friendly micro-transit. Uber especially benefited the young, especially the poor, especially the black and most especially young women who never have to be stranded on the South Side at 2 a.m. because their cab wouldn’t come.

Mayor Peduto knew these truths and he not only “discovered” Uber he realized how it would change Pittsburgh for the better, which it has. I’m an ex journalist and Uber driver with 3500 Uber rides under my seatbelt. At least 5000 people have gotten rides from me since January of 2015. Not one complained. I heard at least 500 Yellow Cab horror stories.

Pittsburgh and other cities are no longer captive to government-sanctioned and government-protected and government-coddled cab monopolies. The morons who complain about Uber, or complain when enlightened mayors like Peduto welcome Uber to their town or tell state regulators to back off (a rare thing, because most mayors are in bed with the local cab monopolies), need to grow up, read some history and learn about the cozy relations between regulators and what they regulate.

They need to learn what horrors Uber replaced and why those horrors existed for 80 years before a politician did something about getting rid of them. To complain when a mayor — a liberal Democrat — tells state regulators (who are monopoly taxicab company lovers/protectors) to let Uber operate in the Pittsburgh market is childish and stupid.

Peduto did the right thing for his city and his city’s people. Peduto should get praise for what he did. The fact that Uber is setting up shop here and is expected to bring 500 or 1000 jobs here is icing on the cake. For Gizmodo to spend three electrons whining about Peduto’s relation with Kalanick is pitiful.