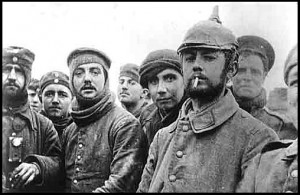 Hey, it lasted until New Year’s Day in a few places!

It’s strange how often football comes up in stories about World War I. Blood-poet Jessie Pope famously and obscenely compared the conflict to a game. And to many, the most memorable part about the Truce of Christmas,1914 was the football match played between British and German soldiers.

For the centennial of this famous and cozy lesson in – arguably futile – goodwill towards men, historians are now debating the prominence of that famous football match. It may have happened on a smaller scale than popular portrayal suggests. Fine.

One wonders why the sport part has such a hold in the public imagination. Perhaps because it’s so metaphorically on the nose. A football game is the way that nationalism should look if it looks like anything at all. It is a friendly competition, like the Olympics in a world without politics. It is not the young being sacrificed for the old’s squabbles.

For all the novelty of the Truce as a moment in history, it makes sense that these men stopped fighting. After four months of war – war that was not “over by Christmas” 1914, or ‘15, ‘16, or ‘17 – some soldiers were already starting to wonder what they were fighting for. Turns out it wasn’t much like the boy’s adventure stories at all, more like mud, misery, and what was turning into months fighting over feet of earth. That’s where the Truce came in.