Saturday Six: Imaginary Director’s Cuts The Least We Can Ask of Politics (That We Don’t Even Ask) 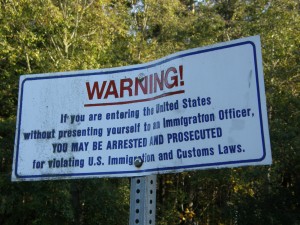 Last time I wrote about immigration for VICE, Breitbart.com used the piece as an example of VICE’s lefty bend. As a Republican who just wants to smoke pot and oppress the poor, that was surprising to me.

Fun fact: fewer people are sneaking across America’s borders than ever before, and net illegal immigration hit zero in 2012. However, that hasn’t stopped Immigration and Customs Enforcement (ICE) from following a “bed mandate” that says it has to keep an average of 34,000 people in custody in its 250 detention centers, as the Washington Post reported this weekend. We’re constantly hearing about how the federal government needs to cut costs, and even the Department of Homeland Security, which oversees ICE, said the quota could be easily reduced, yet House Republicans forced an additional $400 million of funding on the agency, mostly for border security and deportation. In spite of the constant panic over the US’s “unsecure border,”the immigration-control budget has nearly doubled since 2006 (the same year the bed mandate began) to $2.8 billion a year, even though illegal immigration is down mostly thanks to the financial crisis that devastated the US economy. Where is all that money going?

The Post story notes some of the pleasant features of a brand new detention center in Texas that houses immigrants waiting to see if they will win political asylum or be returned to their country of origin: detainees “sleep in air-conditioned, unlocked ‘suites’ with flat-screen TVs overlooking volleyball courts and soccer fields.” That doesn’t change the fact that these plush facilities are built by private corporations that lobby federal and state governments in order to assure they have plenty of building contracts. (The ACLU has extensively reported on what they see as a pattern of human rights violations in immigration detention centers.)

Even if you don’t support open borders, it’s natural to question the vast amount of taxpayer money being spent on policing the geographical movements of people who (generally) just want to get a higher-paying job in order to help themselves and their loved ones. According to ICE, on a single day in early September nearly 20,000 out of 34,000 detainees had criminal records—but in 2009 ICE found that only 11 percent of its detainee population had committed violent crimes.

The rest — including the Bad Cop Blotter — over here.