What’s The Point of This Salon Article By a Man Who Went From Libertarianism to Liberalism? 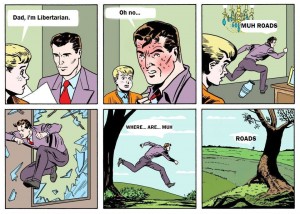 The headline: “Why I fled libertarianism — and became a liberal”.

The subhead: “I was a Ron Paul delegate back in 2008 — now I’m a Democrat. Here’s my personal tale of disgust and self-discovery”.

Edwin Lyngar was a Ron Paul delegate in 2008. Once he got to the GOP convention,  he was baffled by the number of Birthers, Truthers, MoonTruthers and Chemtrailers who apparently made up his fellow Paulbots. (Lyngar also casually equates interest in gold, the Fed, and the JFK assassination with such conspiracy theories. He is not alone in this attitude — the highly-touted conspiracy theory  poll from last spring was similarly sloppy. An enthusiasm for monetary policy is dry, so why not spice it up by implying that to believe in the gold standard is to be sure that the president is from Kenya?)

Lyngar had no libertarian moment of aha!, thanks to a Hayek book, or a Ron Paul speech. He doesn’t really explain why he cared enough to be a delegate for Paul in 2008. He was just vaguely born libertarian, in that he comes from a small town in Nevada where, he writes, “we burned our own garbage and fired guns in the back yard.” He even admits that libertarians are pro-pot, mostly pro-gay, and mostly anti-war, so they have their bright spots still. But also, when he left his small town, his eyes were opened:

I learned that libertarians are made for lots of reasons, like reading the bad fiction of Ayn Rand or perhaps the passable writing of Robert Heinlein. In my experience, most seemed to be poor, white and undereducated. They were contortionists, justifying the excesses of the capitalist elite, despite being victims if libertarian politics succeed.

If you think that selfishness and cruelty are fantastic personal traits, you might be a libertarian. In the movement no one will ever call you an asshole, but rather, say you believe in radical individualism.

Heinlein is only “passable”? Buddy, you read the wrong Heinlein. And if you’re in the libertarian movement, someone will call you an asshole at some point. Or they will call you a statist. Though there are generally agreed upon tenets in libertarianism, there is also tedious in-fighting and minute-to-vital points of disagreement on issues, interpretations, and conclusions. We are not your cheap Dagney Taggart or Randy Weaver jokes, as much as you try to cram us into that convenient mold. We are diverse, and by God, we will shoot ourselves in the foot whenever possible. (Lyngar does acknowledge this incompetence later in the piece, so at least he’s not one of those “dear God, the libertarians have taken over!” folks.)

Lyngar is mostly done with specifics after his live from the GOP Convention ’08 beginning. He changed slowly after his realization that libertarianism indeed attracts weirdos. Soon he was crying for unspecified, but positive reasons when Obama was elected president. And then the financial crisis:

Libertarians were (rightly) furious when our government bailed out the banks, but they fought hardest against help for ordinary Americans. They hated unemployment insurance and reduced school lunches. I used to say similar things, but in such a catastrophic recession isn’t the government supposed to help? Isn’t that the lesson of the Great Depression?

I’m going to give our friend the benefit of the doubt and say, sure, okay, you met three libertarians who were most passionately opposed to school lunches. That was their number one issue, closely followed by the horrors of unemployment insurance. But there are a lot of libertarians who would prefer to tackle the bigger issues first: war, prisons, police, the drug war, financial ruin for the country, occupational licensing, zoning laws, lack of school choice, the death penalty, transportation, whatever you like. And you would know that if you spoke to more than three libertarians — that no, most of them wouldn’t start with cutting the lunches for shoeless Appalachian children program. They’d probably start with trimming the military, the Department of Homeland Security, or that sentimental favorite, the Drug Enforcement Administration.

Lyngar goes on to marry a Canadian liberal, then be disgusted by the racist Birthers in the Tea Party movement. He lurches towards nuance by implying that libertarians who work with the Tea Party are not necessarily the same thing as those religious freaks, etc. But then he notes that at last he has learned to “care about children — even poor ones.” Thereby separating himself from monstrous libertarians, he writes:

I love the National Park system. The best parts of the America I love are our communities. My libertarian friends might call me a fucking commie (they have) or a pussy, but extreme selfishness is just so isolating and cruel. Libertarianism is unnatural, and the size of the federal government is almost irrelevant. The real question is: what does society need and how do we pay for it?

To paraphrase the best French guy ever, Frederic Bastiat, man, liberals really seem to think that if you’re not for government funded, or government-run institutions, you must be against them entirely. Parks are awesome. Some parks also have a long history of hilariously-arrogant mismanagement by government. And it’s cool that you love communities. That means literally nothing in general, and nothing specific to libertarianism. Most of us do not wish to live alone, Unibomber-style. But we’re very keen on anyone’s right to do the best they can at achieving that sort of lifestyle.

The best part of the piece — the part that elevates it to an artful act of trolling — might be the very end. Old Ed says of libertarians: “None are more hopelessly enslaved than those who falsely believe they are free.” That quote, and its accompanying viewpoint, is common in libertarianism. It sounds arrogant, but it’s the evangelizing of a fringe belief that is forever trying to gain converts. How else do you change minds except by convincing someone they are mistaken? And it is no different than liberals who shake their heads at all those folks who “vote against their own interests” — meaning, not for Democrats. To them, libertarians, if they’re not cold, rich, Randian cutouts, they are stupidly opposed to the communitarian pleasures of the left that could benefit them so much.

We’re all snobs when we’re in our own Google Groups, bars, or political rallies. There’s nothing wrong with reveling in “yes, totally! That!” for an evening. But the folks at Salon have the ideological privilege of not ever needing to convert libertarians to their viewpoints. Liberals often treat every conservative victory (one which with libertarians may or may not agree) as an assurance that the barbarians are at the gates. Mentions cuts, and there is nothing between that and Somalia. Liberals refuse to believe that their view of the proper role of government has been a dominant one for decades. They suffer from being The Man denial.

So then, what is the the point of this piece? Optimistically, we could say it could help prove to Salon readers that all libertarians aren’t monsters. Why, there’s always the hope that they will change their evil ways! But it’s more banal than that. This intensely shallow piece is solely an exercise in back-patting. It’s one man’s courageous story of being saved from the darkness of everything Not Liberal, without even the drama of a road to Damascus moment. It’s just that the election of Obama, and the worst of the Tea Party eventually took him on a self-satisfied journey away from conspiratorial meanies to the safe ” bosom of conventional liberalism.” He finally “developed [his] own values.” But a vague sense that libertarianism by nature is cold, cruel, and crazy is not an analysis of an ideology.

Some libertarians choose to interpret the recent cascade of anti-libertarian pieces on Alternet, Salon, and NSFWCorp the last few months as proof that the philosophy is getting somewhere — it can no longer be ignored by the mainstream. But Lyndar’s piece confirms lazy liberal dominance, because why try? Why fight libertarian beliefs, when you can simply revel in having beaten their imaged end-game, as Alternet did recently, — Libertopia apparently outlaws feeding or clothing the homeless! — or simply rejoice in having banished its evil from your own mind, as Lyndar does here.