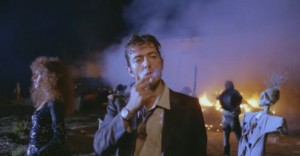 1) Titanic: Once I would have said that James Cameron’s teen sensation blockbuster should be trimmed to a tight 45 minutes, but I am softening in my old age. Just trim every single piece of Cameron-penned dialogue. Remove scene-chewer Billy Zane entirely. Leonardo DiCaprio and Kate Winslet can stay for the one lifeboat scene which demonstrates some acceptable eye acting. Kill all romance and implication that a making out couple distracted every single British sailor on deck watch right before they hit the burg. Edit out the tiresome Bill Paxton learns to love something more than mysterious lost diamonds subplot.

Oh hell, never mind. Just stick to the sinking. Pretend it’s the story of the myriad killer secondary characters and extras who make those scenes gut-wrenching. They are the reason I can’t fully advocate for tossing out Cameron’s film and going for A Night to Remember. The latter is much better overall, but Kenneth Moore is all too chipper as Second Officer Lightoller. It doesn’t hit the gut in the same way at all.

On a side note, someone British please, please, please make an epic miniseries about Lightoller. His life was one of those impossible adventure stories that you make a movie about if they happen once. His happened endlessly. The Titanic was just a fraction of a life that included an island shipwreck on a sailing ship, a diversion into nearly dying in the Klondike, and a late middle age moment of personally taking his beloved yacht across the channel to fetch 168 British troop badly in need of getting the fuck out of France before the Nazis caught them.

On a final side note, my two instances of what could loosely be described as fan fiction were about Charles Lightoller and  Titanic bandleader Wallace Hartley. I resented fanfiction.net for making me file them under the movie Titanic.

2) Straight to Hell: There’s no way to edit a coherent plot into Alex Cox’s punk rock spaghetti Western parody, but editing out co-stars Dick Rude and Courtney Love and their method-whine acting would be a great start. Sy Richardson, some of the weird ’80s hotties Joe Strumer macks upon, Shane MacGowan, Elvis Costello, and director Jim Jarmusch in their bit parts can stay; definitely keep the off-kilter everything — like bad pacing that becomes funny — as well as the gory ending gun battle. But, just, trim off the annoying bits and focus more on sweaty, dusty Joe Strummer in a suit.

(Also, I find Jim Jarmusch, one of my hipster weaknesses if I must call it that, to be weirdly attractive. He can definitely stay. Also, the worst thing about his Coffee and Cigarettes is that he never got around to filming a vignette with Strummer!)

Turns out in 2010, Alex Cox released a new version of the movie, but they’ve only added five minutes of footage, some technical tinkering, and some CGI gore, so the above dream remains unfulfilled.

This is a terrible movie that I knew was terrible, even after searching Dormont’s (outside of Pittsburgh) Incredibly Strange Video for a VHS of it to rent (this is circa 2003). But either its humor holds up in spite of the no-plot plot, or sweaty Joe Strummer in a desert-covered suit is just that compelling.

4) On the Beach: There’s no way to edit in even attempted Australian accents or radiation sickness, so let’s stick with just editing out the God-awful, over the top Ernest Gold score. Not so disturbing (or good) as the Nevil Shute novel on which it is based, this 1959 picture about the last remnants of humanity waiting to die after a worldwide nuclear war is still pretty damn bleak for its time. But whenever you start to feel that existential stomachache, the score aggressively demands your attention and heartbreak and sorrow, and then it’s all gone. Because it’s of course just a movie.

5) Good Evening, Mr. Wallenberg: Maybe a pet peeve of mine, but I disliked this Swedish film’s choice of beginning with an attempt at a motivation for Swedish diplomat Raoul Wallenberg’s beyond-heroic efforts in saving 100,000 Hungarian Jews. The movie has to show Wallenberg witnessing the bodies of Jews being thrown from a train in order to explain his decision to accept the diplomatic post in Budapest. Why? I seem to recall that Wallenberg met some Jews who had fled to Palestine in the 1930s, but crimes against humanity in the cinematic way wasn’t why he went to Budapest. The man was looking for some purpose in life and he found it. And he was really, really good at it. By all accounts, he got a certain rush out of some of his audacious actions — at least before the actual battle for Budapest began. The movie mostly focuses on those rough, later days, which is an interesting choice — his triumphs where he pulled people off of trains and saved them from death marches are seen briefly at the start — to spend the most amount of time with our hero when he’s reached his limit.

This is a good film, but I have never found its way of telling the story quite satisfying. You want your perfect Hollywood man, with an arc from would-be profiteer to savior? That’s what Oscar Schindler is for. Wallenberg was less obviously interesting, more of a cipher, but that makes him all the more a superhero. Superman versus Batman, maybe.

6) Signs: My dad forgives any old movie not filmed on a studio lot. I forgive any terrible ending when a movie has done such a kick-ass job building an atmosphere of subtle, claustrophobic terror. And aliens just speak to me in a, I am technically 15 years old but I cannot sleep right now, way. The part where Joaquin Phoenix is watching the news in the closet and it is supposedly home video from a Brazilian birthday party, and then you see the alien for a second — I have never before or since made an involuntary and loud noise of alarm in a theater. Also, Abigail Breslin is so great. The Culkin kid is Culkinish, but Breslin always strikes me as such a believable little girl.

The edits I would make? The ending — spoilers! — with the water. Maybe it’s a metaphor, maybe it’s fluoride or minerals or something beyond H2o, but people just couldn’t abide that aliens could be killed by a substance that covers 70-odd percent of the planet. And I get that. The whole everything was meant to be and leading up to saving the Culkin bit was so purposefully unsubtle that I never fully minded, because it seems like a picture of a different world than the one in which we all reside. But as much as I find this movie a net good, the fact is that it deserved something better. The set-up is funny, scary, well-acted, and eerie. The idea of a man who has lost his faith in God having to face (potentially-allegorical) extraterrestrials is terrific. I am not sure how I wanted Signs to end. But like many a Russell T. Davies-penned Dr. Who finale, the lead-up was so great that the ending had to be a disappointment — but it didn’t have to be quite that cheesy.

Have any of your own suggestions? Lay ’em on me in the comments or wherever you like.