Rachel Maddow and the Unworthy Victims of Waco and Ruby Ridge 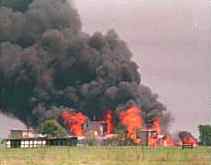 Today is the 21st anniversary of the holocaust that killed 76 Branch Davidians at Waco. And though their deaths have been politicized in a thousand different ways by now — and even used as an excuse to commit more mass murder — their deaths were real and they were completely unnecessary. And, regardless of who set the fire or how it happened, the fault lies with the federal agents and government officials who are tasked with legal force and who fell down so colossally on their jobs that day. Waco should be an issue of bipartisan horror, and in some ways it is. But there are people who still refuse to admit that it was more than just a battle cry for the anti-government fringe; that it was real, and it was wrong, and it didn’t need to happen at all.

A hundred years ago, or perhaps a decade, Rachel Maddow seemed like a reasonable, nuanced type of liberal. She and Tucker Carlson — who, even if you are not wild about the Daily Caller, is a fantastic magazine writer in his own right — used to have respectful, interesting debates on Carlson’s MSNBC show. Now Fox has turned MSNBC into the Fox of the Left — though arguably worse, since MSNBC were sniveling hacks during the war in Iraq; Fox at least hates the executive branch half the time — and Maddow has turned into the female Keith Olbermann, with the towering self-satisfaction to match.

I don’t particularly care that Maddow seems to be for some modicum of gun control, or even that she believes some type of federal agency should be in charge of enforcing some of those firearms laws. What disturbs me, and what makes me believe that Maddow has truly crossed over into the realm of pure partisan hack is how she talks about Waco or Ruby Ridge. Maddow seems barely able to recognize that those two tragedies involved the deaths of more than 80 people (including federal agents). She seems to believe that to reference Waco or Ruby Ridge with anger or as a remembrance of what government excess can do is simply a sign of right-wing extremism. Whether she believes that truly, or whether it is part of the act, isn’t really the point.

Though CNN’s shockingly one-sided “documentary” on Waco from last year cannot be beat in terms of excluding information that provides shades of gray or context, Maddow’s bizarre campaign to be best friends with the Bureau of Alcohol, Tobacco, Firearms and Explosives (ATF, in common use) is still impressive in its dishonesty.

Take her piece from early 2013 about right-wingers who dislike the ATF. Besides making me like the NRA more than I ever have before by mentioning (clutch your pearls!) that they published something that called ATF agents “jack-booted thugs” a mere month after the Oklahoma City Bombing, Maddow also has a bizarre screed about how right-wingers think Waco was a conspiracy.

In the report, Maddow traces the history of fringe candidates in ’92, including Bo Gritz who helped to talk Randy Weaver into surrendering after an 11-day standoff at Ruby Ridge. Or, as Maddow put it a “violent, fatal standoff” — then she cuts to a contemporary news report on the situation, to make sure no larger context is available. The Weaver family is described as “hiding” in the cabin which they lived — that became a cause for the anti-government, far right. (Fine.)

Then she moves onto Waco, making sure to call David Koresh a cult leader (accurate in my mind, but a very loaded term — she says “four members of the cult were killed”) and the Davidians’ home a “compound.” Maddow doesn’t touch the fire controversy herself, she simply cuts to Tom Brokaw on April 19, 1993 talking about the apocalyptic messiah complex of Koresh and heavily suggesting he “took his followers with him.” Again, why bring in any uncomfortable nuance or context from 20 years on, when you can just sum up the situation with a media report from the day of the tragedy? (Sure, the press was kept a mile away and forced to depend on FBI press releases, but that’s no reason not to believe them.)

Now Maddow gets very strange. She says “what happened at Waco was an absolute nightmare. But on parts of the very far right — the anti-government, far-right fringe, it was seen not just as a a nightmare, but as a conspiracy — as a government conspiracy. As something that was ginned up and in fact faked by the government to create a big enough, scary enough, situation that it would justify taking away everyone’s guns.”

Her language choice is fascinating. The tamest possible acknowledgement that Waco equals bad was used — it was “a nightmare.” But then come the dire suggestions that anti-government folk think Waco was a conspiracy. How exactly? That it was a false-flag or something? She doesn’t say what she means exactly, but by merely mentioning “conspiracy” the lens shifts — suddenly viewers are thinking of Alex Jones’s wildest claims, not those found in Academy Award-nominated documentaries.

Some people do think it was a deliberate execution. I believe they are probably mistaken. Waco was “merely” criminal negligence, criminal homicide, assault, and a staggeringly high level of incompetence. But Maddow, by focusing on the unspecified crazies who seem to think Waco was a gun-grabbing excuse, doesn’t have to focus on any of that. She goes on to talk about then-Congressman Steve Stockman who also once wrote a piece on how Waco was an excuse for gun grabbing. This is what outrages Maddow — that a US Congressman would engage in such paranoid fearmongering. Paranoia — only slight paranoia — is the moral failing. Twenty melted children is a “nightmare.”

And now we’re on to Timothy McVeigh and the Oklahoma City Bombing. McVeigh, not a militia member in spite of what Maddow said, went to Waco! He was angry about Waco! He hated the ATF! McVeigh, that asshole, made sure there would always be a tie between being mad about Waco and being suspicious. But someone actually smart — and God knows, Maddow thinks she’s smart, and is certainly book smart — can recognize that there is nothing strange about being horrified at Waco. Maddow doesn’t have the courage to just say she thinks it’s suspicious, she just presents all this in a faux-neutral manner. She thinks Waco was a “nightmare,” so she is fair.

Now, I didn’t follow the beginnings of the standoff between rancher Cliven Bundy and agents from the Bureau of Land Management. According to Maddow last Wednesday (and various clips from pundits), Fox News was going a little crazy with the comparisons between Bundy Ranch and Waco. Although any kind of resistance to federal law enforcement instinctively goes there for some people, the comparisons are not always ideal. Certainly, if the Fox News pundits were rubbing their hands together in glee, it could be seen as bad taste — they want dead patriots to prove their own ideological points. (The clip includes comedian Tom Shillue noting that the folks in all these places were a little kooky, so yes, a reasonable government would BACK OFF). Nobody sensible wants that kind of bloodshed to happen again. But Maddow’s objection doesn’t seem to be about the victims of Waco whom she barely acknowledges. No, it’s about Fox News being paranoid about “jack-booted thugs” again. Again, paranoia and fear towards the government is the ultimate moral failing according to the MSNBC queen.

So, to demonstrate her true news bona fides on Wednesday, Maddow spent six minutes letting former ATF agent Jim Cavanaugh spout off about the dangerous cultists that he confronted in Waco. She doesn’t ask one single question that is remotely confrontational. She just lets him talk, then thanks him.

When researching my senior thesis on the media’s unquestioning narrative towards Ruby Ridge and Waco, one chapter in this compilation on Waco stood out and influenced my conclusions — the one that used Noam Chomsky’s Manufacturing Consent.  I have yet to read the latter work, but in the chapter the authors note that the victims of Waco were not, to use Chomsky’s term on how the media treats certain people, “worthy victims.” They were, as is and was endlessly repeated, members of a cult. They were strange and heavily armed and dared to resist federal agents. The Weavers were racist. Koresh probably molested children.

And, there were no photographs of the Waco victims when they died. Their deaths were simply a burning building a mile away. Hell, before the fire the feds refused to release the video the Davidians shot during the siege to the media because it would humanize them too much.

The same can be said about most war victims, at least where the American press is concerned. This point was raised disturbingly eloquently by none other than Timothy McVeigh back in a 1998 essay. And McVeigh’s crimes at Oklahoma City were captured by the famous photo of the fireman holding a dead toddler. Naturally this made the victims of McVeigh true and worthy ones. Waco didn’t have that. Sam and Vicki Weaver didn’t have that. They were weirdos and victims of law enforcement. They “deserved” it.” Just like foreigners in countries the US chooses to invade.

Had the media been honest at Waco, they would simply have said, “We don’t know what happened, though law enforcement says X.” They didn’t do that. They treated — and continue to treat — law enforcement as ivory tower experts, instead of individuals with their own biases and agendas. And at Waco, where the press were corralled more than a mile away, trusting the very people who were infringing upon their access was particularly lapdog-like.

Maddow is free to advocate for gun control all she likes. But her inability to admit that the victims of Waco and Ruby Ridge were real people, not just dog-whistle causes for the anti-government fringe she fears, makes her a callous hack and a true journalist in the saddest, most craven definition of the word.

“I got a wife and kids on Ruby Ridge/Please don’t shoot me down.” Human beings were there, human beings died at Mt. Carmel —  this is something Maddow seems completely unable to grasp because it gets in the way of her agenda.