Dear Amazon.com Reviewers: Children’s Book About Jail is (Sadly) Not a Funny Concept 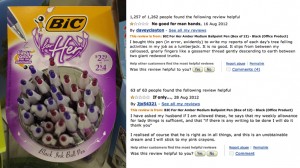 A few months ago, the internet was briefly entranced by the hilarious Amazon.com user reviews that appeared on the product page for Bic Pens “For Her.” Because Jesus Christ, people, this is why vaguely feminism blogs like Jezebel should exist, to counter this kind of absurdity and to mock it to death. If pens are not gender neutral, nothing shall ever be.

Today my cousin (in seriousness)  shared a facebook photo of a book called The Night Dad Went to Jail. The cover has a sad anthropomorphic bunny writing a letter to their jailed father rabbit.It is a troublingly cute, troublingly human-looking rabbit which is why it’s sort of funny at first glance. Except when you click on the author’s name, Melissa Higgins, you see that she has also written a book to help children get through their parents getting divorced.  The book, it seems, is meant to be taken very seriously. The subtitle in the other edition I found is What to Expect When Someone You Love Goes to Jail.

And why not? This situation has arisen many more times than I can stand to consider. But this reality didn’t stop three quarters of the Amazon.com reviewers from posting fake reviews that joke about soap dropping and soliciting “trannies,” selling drugs and being a super villain as reasons for buying this book for your kids.

It’s a small thing for me to be peeved at, but then again it’s not, if only because of all the propaganda in the air that says if you’re in jail, you’re not like the rest of us, you deserve this, and you are certainly not ever innocent.

I just find it strange that a country with two million people in jail can still so brilliantly get across that jail is what happens to other, bad people. This, and every other sitcom or bro-movie that makes prison rape jokes, is just another reason the state will always win. We should, at least, stop believing this idea and start looking into just who is being caged in our name and with our money.