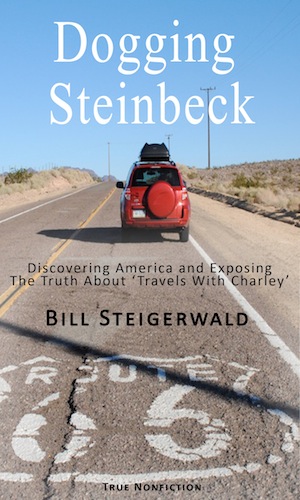 It details how I discovered the truth about Steinbeck’s iconic 1960 road trip with his dog Charley and how I exposed the fraudulent nature of the allegedly nonfiction book Steinbeck wrote about his journey.

My book, which I swear is 103 percent true, is a literary detective story, a traditional American road book and a primer in drive-by journalism and how the media work. All from a libertarian point of view.

It’s also part history lesson of 1960 America, part book review, part Steinbeck bio and part indictment of the negligence of Steinbeck scholars who failed to discover Steinbeck’s literary deceit for 50 years and then blithely excused it as inconsequential or irrelevant after I told them about it.

Guess I should have included footnotes.

The liberals manning the New York Times editorial page liked what I learned. So did the leftward boys at “On the Media” on NPR. So did Paul Theroux, Brian Lamb and my 96-year-old Mom.

But a lot of people — especially young and/or romantic diehard “Charley” fans — don’t appreciate me for ruining the romance of Steinbeck’s flawed book. Just look at the dumb 1-star reviews on Amazon.

But sorry, Steinbeckies, what I did with my humble work of journalism has changed the way “Travels With Charley” will be read forevermore.

In the fall of 2012 the book’s publisher, Penguin Group, issued a 50th anniversary edition of “Travels With Charley” that admitted that what I had learned and exposed was correct — as in “the truth.”

“Charley’s” introduction, first written by Steinbeck biographer Jay Parini in 1997, from now on will contain a major disclaimer warning gullible readers that the famous book they are about to read is so full of fiction and fictional techniques that it should not be taken literally or considered to be a work of nonfiction. In layman’s terms, it should be considered a work of bullshit.

Parini’s disclaimer includes this stark sentence: “It should be kept in mind, when reading this travelogue, that Steinbeck took liberties with the facts, inventing freely when it served his purposes, using everything in the arsenal of the novelist to make this book a readable, vivid narrative.”

I wasn’t given credit for this discovery of this ugly truth. I was identified only as a former Pittsburgh Post-Gazette reporter who did some light “fact-checking” (and made lazy fools of the Steinbeck scholars).

But at least from now on no 14-year-old who reads Steinbeck’s classic road book will ever be tricked into thinking it’s a true story. I hope.

Ethan Casey: Drones Are the Napalm of Our Crazy Time

I was born in 1965, the year the first U.S. combat troops went to Vietnam. Growing up in middle-class America in the late 1970s and early 1980s, I distinctly remember that “Vietnam” – the place name stood in for a great many things left unsaid – was not discussed, almost taboo, among my parents’ generation. I didn’t realize this at the time, of course. I could only smell it, like the residue of something the dog left on the carpet, through the layers of deodorant and disinfectant.

Americans who had lived through “Vietnam” were emotionally and politically exhausted and had declared a tacit truce among themselves. That suited them – all of them, on all sides – but it left my generation poorly served. How can young people learn the lessons of history, if no one is willing to teach them? I had to assemble the puzzle for myself later, through self-directed reading and actually going to live in Southeast Asia. My first clue that I would need to do this came when I asked an older friend what “the sixties” had been all about, and he blurted out in bitter exasperation: “It was about how the blood of the war got on everyone’s hands, and we couldn’t wash it off. It’s still all over the place.” …

Super-star best-selling author and Kennedy-family expert Laurence Leamer  and his new book “The Price of Justice” are being tortured by the brain-dead legacy publishing industry and the low-info dolts who run TV.

Below are two emails Leamer sent out to his friends and fellows describing what is and is not happening with his latest book.

“The Price of Justice,” which is almost guaranteed to become a movie some day, is about a pair of nobody Pittsburgh lawyers who went to court to challenge the nasty business practices of Don Blankenship, the former West Virginia coal baron and CEO of Massey Energy.

Leamer is a major best-selling dude.

Read the rest of the article at Steigerwald Post