Tuesday Apocalypse: How I Live Now 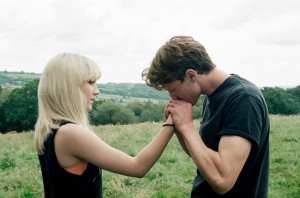 Saoirse Ronan as Daisy, some Brit as her sexy, sexy cousin.

Welcome to The Stag Blog’s series dealing with portrayals of the end times through movies, novels, docudramas, documentaries, instructional pamphlets and films, songs, and memories. The focus will mainly be on nuclear fears during the Cold War, but we may branch out into some asteroids, aliens, or plagues. Let’s keep it loose.

Guest posts are particularly welcome on this subject — give me your best nuke movies, your memories of hiding under desks, or your childhood (or adult) worries over alien invasion.

This week, the subject is the new movie How I Live Now, and the 2004 young adult novel upon which it is based. It is a story of war, moving to a new country, and why sometimes you just need to sex up those relatives who catch your eye.

Apocalypse cinema or television (or even books) lives for the money shot — be it grand destruction of a famous monument, or a more humble bit of well-written or captured horror. The movie How I Live Now has two types of sequences, the bleak and the bucolic. It does them both very well, but in the end, though it’s better than the Meg Rosoff YA novel upon which it is based, the movie falls apart for similar reasons. It’s as flimsy as its anorexic, neurotic heroine, and though it tries to find a hard-ass center, there just isn’t much to it.

In each medium, 15-year-old Daisy (Saoirse Ronan) is a cold New Yorker. She is sent to  her cousins’ in England to get her out of the way of her father and stepmother. She killed her mother at birth, and therefore has issues. Meanwhile, war is looming, not that any teens give a shit. Upon arrival (in the book), she drops her American ‘tude approximately four minutes after meeting her wood sprite cousins. In the movie, this include annoying Issac who precociously drives at 14, scrappy Piper, sevinish and a bit of a Mary Sue, and Edmond, the dreamy, disturbingly attractive cousin. Yes, Daisy and Eddie hook up. Yes, it’s a little weird. But it wasn’t the dealbreaker for me that it was for, say, this io9 writer. It just isn’t enough to be the whole heart of the story, except, too bad, it is.

Daisy has a relatively endearing run-off sentence style in the book. But her narrow eye becomes less appealing — and much more contrived — after the fourth time she conveniently decides to ignore an adult’s explanation for what exactly the fuck is going on with this war business. Her obsessive focus, useful in surviving, if not contextualizing, is turned into an acknowledged character trait in the movie (basically OCD), but anything from her view still feels shallow and myopic.

The book just rakes on the cliches of the faeryland of England. There are more cousins there, and the cliches are divided up between them. Eddie has the mysteriously telepathic powers. He just gets Daisy, man. His twin, melded into him for the movie, is the obligatory strong, silent, and Dickon-esque type. And yes, I could choose to see this as so deliberate an homage to The Secret Garden that it is acceptable. But I can’t. If only because all that English shit was so appealing to me as a tween, I can’t. Edmond has a falcon, for fuck’s sake. I can’t stand it. He speaks to cows. The Secret Garden plus nukes sounds great. Why don’t I buy it?

The movie initially seems more promising — tightening things, and letting the loving, but not syrupy shots set the scene. And the English cottage is falling down, and there are dishes in the sink. Piper is a dirty-faced, solemn, kind, but human ginger, not a pixie making every soldier fall in love with her. The war situation is not treated quite as much as an excuse for playing Lost Boys as it is in the book. And the moment when we know something is wrong is treated with the gravity required . The paradise of a day at the swimming hole, during which Daisy begins to accept her God damned magical surroundings, is stopped by a rush of wind, darkening skies, and falling ash. We don’t even see the mushroom cloud. Little Piper, of course, calls it snow. It gives the necessary chill down the spine, and it gave me false hope that the movie was going to get away from the book more than it did. But again, if you want your doom and gloom money shots (and I do), the movie does come with that.

They survive. And still have a good time for a bit. Daisy burns her pass to go back to America because Eddie is now her whole world. But soon enough, scary soldiers (still British, though) come to separate the two boys and two girls. And that’s it for the plot, really. It’s all Daisy and Piper being shoved away into a creepy old English house, being sent to sort potatoes on a farm, and planning their escape back to their home. In some ways, the movie’s choice to ignore some of the details of the book make it better, or at least less maddening that Daisy has no questions about what the hell happened to her new country. The shots of wrecked countryside seen flickering through her window when she and Piper are taken are effective, showing enough for horror, but not enough for clarity or contrivance that she doesn’t see the whole picture.

But it’s still too little. There’s an enemy, at one point they “take [a] checkpoint.” A neighbor boy is shot, in the head, and is actually show still alive on the ground for a few seconds, groping in the mud. Same with the eerie details of a downed plane — the first object Daisy and Piper see is of an oxygen mask lying in the woods. Shudder. And the same with the moment when Daisy has to dig through a pile of bodies to make sure it’s not her cousins. It’s flawlessly-crafted, in the vein of the opening of the pilot for The Walking Dead, but much starker. Yet, it’s still just a nightmare moodpiece. (This is a problem for apocalyptic fiction — that dread is unsustainable — and why it so often delves into survivors sniping. And why the fiction that doesn’t do that is something special.)

Too many sad pop songs over beautiful landscape. Too many montages. How I Live Now doesn’t commit the unforgivable sin of putting conspicuous music over its worst bits, but the filler feels like all music sometimes. The frantic, whispered voices in Daisy’s head that were supposed to represent her OCD and anorexia worked better than I would think. I appreciate that she didn’t warm up and become hero mom figure to Piper like she did in the book, but some sign of caring about the red-headed moppet wouldn’t have been amiss. Ronan is good, the Brits are all decent. Nobody is stilted, but nobody is exceptional.

And though the lovely cinematography of the movie makes the book’s flimsy plot seem more substantial, it had the same endless problem. I want to know more about the war. And I want more than a teenager falling in love with a place and her cousin, then being taken away, and having to walk back for a week over broken landscape. Piper and Daisy seem exhausted, in book and movie, but I still want to say, dammit, have you not seen Rabbit-Proof Fence? You pansies think a week of walking in England is bad? Somehow, again in both mediums, the characters treat the situation too heavily and too lightly. And nobody ever asks what’s going on. I don’t care how hot your cousin is, I don’t care you much you miss him, you take the time to fucking ask an adult who nuked London.