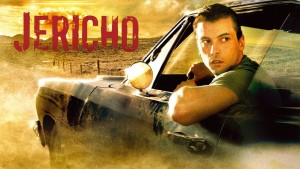 Oh, right, fallout. That thing we forgot about in the first episode. The thing that makes nukes more than just aesthetically terrifying clouds in the distance.

This is a tight, fearful episode. A storm is coming from Denver, and not knowing what kind of bomb went off, the people of Jericho are terrified of what those clouds may bring down upon them. Emily is still outside of town, clueless as to what has happened. She meets the two escaped criminals (oh yeah, that happened) who are impersonating deputies, and who have killed the sheriff and kidnapped Deputy Jimmy and Deputy Occasionally-Mean Guy.

I hate when apocalyptic fiction goes straight to “oooh, rogues are on the loose because society has broken down!” if only because a nuke is a lot more interesting than a dude with a teardrop tattoo. However, Emily versus the fake cops works better than it might. It’s drawn out tension, which is enhanced when she brings the men to the Richman ranch (girl, cops do not have mustaches like that — but it’s a neck tattoo peeking out that gives it away) and has to communicate with Bonnie in subtle signing that this is a problem. Plus, we have two relatively competent ladies here, which is nice.

This episode does signal two obligatory difficulties for our characters in a nuke setting. Cons on the loose, and the invisible peril of fallout. But though we don’t know everything about the show yet, we do already know that this isn’t Testament. This is a CBS show. It’s going to be about network TV-level of grim survival, not about slowly wasting away. And, you know, a tv show needs characters.

In short, though the episode is well done, and though people might die, this episode doesn’t give you an apocalyptic stomach ache. Just a little anxiety, and a touch of claustrophobia as the townspeople race to get their shelters ready, and Bonnie and Emily try to casually outwit the cons.

Back in Jericho, there’s a great scene where the cops have grabbed every single book about nuclear anything from the library, and one is Our Friend the Atom (“some friend” notes Gray Anderson bitterly). Hawkins again knows a little too much about what do in case of nuclear fallout — or he’s read this manual I keep almost buying because of its perfect balance of creepy and cheesy graphic design — but his explanation is only “I was a cop in St. Louis, and after 9/11 we got up to speed.”

The town’s shelter doesn’t have a working air filter, and Gray Anderson will definitely be using that in his weird macho war with Mayor Green. For once, he may have a point. Actually he has one a lot, but he’s still annoying.

Towns people are taking stuff from Gracie’s store, but she stops Skyler from grabbing a diet soda (asserting her property rights, while still accepting that emergency food is being taken! Gracie is also kind of the town gossip and sort of unpleasant, but she’s not a villain, and Dale has a serious loyalty to her. All of this is interesting to me.) This leads to Dale and Skyler bonding in her sealed up house. Dale slept on Gracie’ store floor the night before, because he clearly has nowhere else to go now that he hasn’t got a mom. Skyler may not have a mom anymore either, and a sad conversation about that as the fallout-drenched rain falls brings the nerd and the mean girl closer together.

This is the first episode where Jake being in charge is assumed. Basically, this town cannot function without male Green leadership. No wonder Gray Anderson is tired of it. Hawkins is told to fix the HAM radio, and finds secret messages, then says he can’t get the thing working. Much mystery. All the mystery. We see Hawkins’ family for the first time, as they huddle together in the basement. They are not entirely likable, but they are intriguing. There is clearly tension between the son, the daughter, the wife, and Hawkins. Hawkins’ wife Darcy tells him “you always know something” and he says not to ask questions. What does he know? Is he a terrorist? Law enforcement? CIA? NSA?

Most of the scenes of people packing up bags with 90 minutes to spare are good. And the scenes of other townsfolk sealing up their houses is deliberately very early War on Terror. It’s definitely less excessive than the 9/11isms in the 2005 War of the Worlds, but it brings back mentions of how to be safe from a dirty bomb or chemical attack, if you’re the right age.

Eric — the insufferable junior version of his father — has to lecture a bar full of douchebags to go to shelter so they don’t die of radiation sickness. Good thing he has a flaw, which is his affair with the uninteresting Mary, who owns the bar. Eric’s wife isn’t interesting either.

(Somehow I hate a lot of these characters when I stop to think about, but I keep on watching. Actually, Jake may be an asshole who disappeared for five years, but I don’t blame him.

Basically, everyone is annoying except for Jake and Bonnie, and usually Heather and Stanley, but I feel like I need to apologize for finding Skeet Ulrich slightly attractive.)

Finally, realizing there just isn’t enough shelter for everyone in town, Jake decides to put people into the salt mines just in time. He, however, has heard Emily using the police radio to call for help. Which annoys me, because girl, you know nukes have happened. You’re not helpless, and are in fact quite savvy in your standoff with the cons. So you do have the capacity to realize that if Denver has been nuked, police don’t give a shit about your personal peril. Really, this is all just so Jake can come and save the day. One of the cons grabs Bonnie, Jake shoots the other con. Emily shoots the one who has Bonnie, and then she stands catatonic, so that Jake must hustle her into the Richman’s storm cellar. Unfortunately for this plot and later ones, Jake has much better chemistry with the painfully peppy brunette Heather than he ever will with sad Emily.  I mean, they flirt while in peril and it almost works.

Instead, we get Jake saying he wanted to keep Emily safe, but she says she’s “never safe when you’re around.” So, to reiterate, both Jake and Hawkins are mysterious people. And Emily is a school teacher, so that means she can shoot people, but then feel awful about it. This is — and Heather’s random technical skills — is the extent of female competence on the show. We’ll get to that, once it becomes truly tedious. So far, things are just fast-paced and stressful on the show. And that’s working very well.

The final scene — pop song propelled yet again — shows townspeople in the shelters, and then Hawkins putting pins into various cities. It sure looks like the nukes hit more than just Denver and Atlanta. (Oops, Pittsburgh was one. Pittsburgh AND Philly? Musicians can’t handle visiting both, how can nukes?)