Tuesday Apocalypse: When The Wind Blows 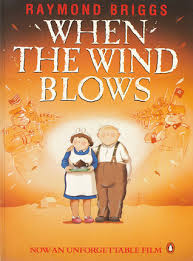 Oh my God, Raymond Briggs, The Snowman was traumatic enough.

The chipper, addled senior citizens of Briggs’ short 1982 comic are aggressively out of touch. Jim Bloggs is cheerful and convinced that the government will save them from impending war, even if he has enough sense to take the prospect seriously. His worrywart wife Hilda thinks there’s time to reprimand her husband for swearing, and for messing up the house. There isn’t.

The preparation is careful and deliberate. Jim follows civil defense instructions to the letter. Except that he carefully builds an inner, fallout-proof sanctum in their house, but then fails to remember that they were supposed to stay inside it for 14 days.

What first appears to be goofy, can-do, learned it from the blitz spirit becomes sort of hamfisted and impossibly oblivious in time. Nobody could actually be this stupid, right?

However, after long, overly detailed build-up, the moment the bomb drops is amazing and nauseating, which is no small feat for a comic. The art is flawless. Pastoral home lived in by two round-faced seniors turns into grim and grimmer. Any aesthetic echos of The Snowman makes both comics much worse. 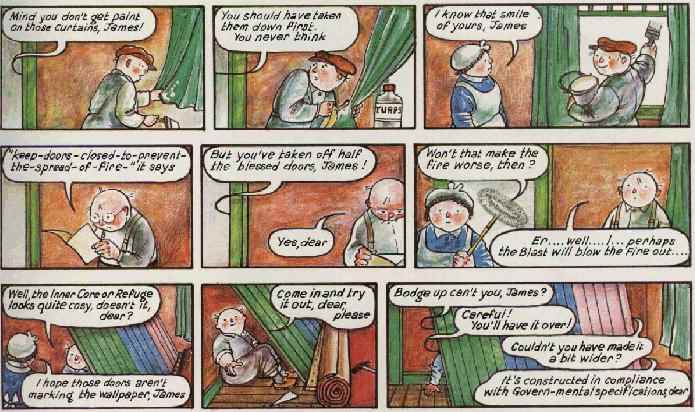 Yet, they’re both so dumb. Impossibly dumb, unless they are really simple folk. Yet, one can more easily imagine simple folk not trying as hard as Jim and Hilda do to survive. It’s like they almost would have made it, but no, they never had a chance.

The reader knows. We know Jim and Hilda are sick long before they do. We know that the smell of roasted meat in the air isn’t barbecue. The chipper cluelessness of both of them is too much to believe or stand. And that’s the genius of it. The condemnation of doing your bit, the sympathy towards and gentle mocking of people who trust the government to not leave them in the post-apocalyptic lurch. Who assume that if you have the right checklist, nuclear war will be nothing but a bit of a bump in the road. We’ll tighten our belts and ration food for a time, but then we’ll be fine. Not so. Not so.

The end is so on the nose, it’s practically WarGames. You know, “strange game…the only way to win is not to play” as it applies to global thermonuclear war. It’s not hard to figure out the meaning of Hilda and Jim passing away from radiation sickness, while Jim quietly recites “The Charge of the Light Brigade.” He doesn’t know why that bit of stirring, stern, sincere poetry comes to mind. But we do.