All You Need to Know About El Nino Tuesday Apocalypse: A Canticle for Leibowitz

Calm Down About Uber 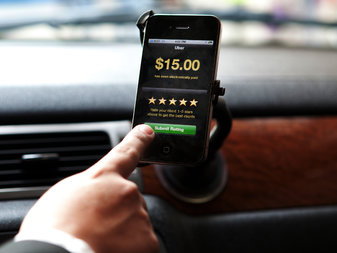 Since their founding in 2010, San Francisco-based car service Uber has made advances into more than 30 cities around the world. Staying there, however, is often an uphill slog as they battle regulators and buddies of the taxi or limo industries.

Objections to a service that allows consumers to order a car through a Smartphone app that come from trade groups, regulators, or other anti-capitalist capitalists are’t surprising, though their transparency on occasion is darkly amusing. It’s the objection from the common man, blogger, or journalist that is baffling. Uber, unlike taxis and their fixed rates, changes their prices based on weather, demand, and other logical economic factors. They do this to make the trips worth it for their drivers — thereby preventing a shortage of Uber cars when the demand is high. And that doesn’t mean they’re going to subsidize for those of us who can’t accord to pay $47 for a 2 mile cab ride. They have neither reason, not obligation to do so.

Pricing this honest makes some people unhappy. Indeed, hundreds of dollars for short rides during the recent winter stores, or during New Year’s Eve in New York City sound shocking, but these fares are based on high demand.  There some allegations that consumers weren’t warned ahead of time what the increase might be (though a commenter who professes to be an Uber driver disputes that). If so, that’s not going to win them good press. But most accounts of fare-shock don’t include specific allegations that say they weren’t warned about the jump in prices.

In fact, perhaps to sooth some of the recent backlash against them, just yesterday Uber announced they were experimenting with temporarily lower prices in 16 cities. This means that the price of an UberX car — a less fancy type of vehicle than Uber often sends — in some cities will fall below that of taxis. And taxis, for all their ills, do tend to be pretty cheap rides. The problem tends with them tends to be an almost complete lack of them in certain cities (like Pittsburgh), or a shortage of them made artificial by caps the drivers or on starting a new company all together.

We see it in New York City, where the cab medallions that let customers hail you from the street were capped at 11,000 for 70 years, and there are only a few thousand more today. No wonder they cost as much as condo in New York City. We see it in Pittsburgh, where I have waited for three hours for cabs that didn’t come (waited at a liberal arts college in a nice neighborhood, so let’s go out on a limb and assume minorities in worse neighborhoods don’t bother to call Yellow Cab at all). A few years ago, I drove around for a few hours with a jitney driver(/cartoonist/generally fascinating character). He swore there must be 1000 illegal cabs in the city, mostly serving poor, black neighborhoods, as he does.

The law in Pittsburgh puts the onus on a new, upstart cab company to prove that they won’t take business way from Yellow Cab or which ever company got into the turf first. This makes a mockery of competition, and there’s no way I can think of to sell it as a pro-consumer action, though be my guest if you want to give it a try. Now, I’ve heard people complain about DC cabs, and there are plenty of clunky laws and advocates for worse ones, but coming from Pittsburgh, DC was a joy. I could hail a cab and be in one in five minutes.

Though Uber is currently out of the price range of some poorer folks, railing against their existence is still the privilege of someone with lots of transportation options. Bitching about the convenience-dystopia that Uber is ushering in with the touch of a Smartphone is your prerogative. But like all myopic declarations of how the world should be, the Valleywag piece that said as much neglected to consider the implications of their shitty, no-show cabs paradise. (Valleywag seem to have a bizarrely intense vendetta against Uber, judging by past blogs.) How many of those illegal jitney cabdrivers in Pittsburgh might like to advertise their services and perhaps earn more money by starting a legal company?

It’s hard to argue that multiple cab companies is somehow less safe than hundreds of unmarked cars. Complaints about the standards or the behavior of driver from Purple Cow Cabs can be acted upon by authorities. Whereas, that guy in the unmarked car stole my wallet, tried to assault me, or dropped me on a highway overpass instead of home is a bit harder to follow up on. Similarly, drivers would be safer knowing they can go to police and report robberies or other problems. (Police mostly look the other way about Pittsburgh jitneys, as far as I know, but that’s not the same thing as giving them freedom to advertise their services and grow their business.) Like every other banned substance or service, from sex-for-pay, to narcotics, to abortion, to immigration, transportation happens regardless of restrictions. And like those other “vices”, the safety of those involved in these economic transactions could be heightened by giving people the freedom to work without fear of government crackdown.

So why are so people objecting to Uber? Last month, Slate’s main econ guy Matt Yglesias wrote a surprisingly solid piece on the company, his premise being that yes, they should be regulated, but no more so than regular transports. Emissions, safety, licensing, insurance, and other standards that already apply will apply. Basically:

But you don’t need rules that specifically discriminate against rides for hire.”

Relative to much of humanity and their slack-jawed hunger for more revenue and restrictions, that was a Rothbardian cry of freed markets, ho! Any leftist who has a terror of a world without regulations should at least be able to grant that the ones on taxi cabs are too much. The restrictions favor one business over others at the expense of the consumer, and untold potential entrepreneurs, many of whom are poor minorities or immigrants.

That knowledge is spreading a bit, or at least has become more news-worthy thanks to Uber and its ilk. Even folks with a sad story of Uber surge pricing to tell, like The New York Times’ Annie Lowrey, don’t seem entirely opposed to the company. Lowrey also makes the savvy point that Uber’s painfully honest prices feel particularly bizarre because taxi services have had their prices fixed long before the invention of the car.

On the other hand, pieces like George Mason assistant professor Siona Listokin’s are disheartening. So close, but so wrong; Listokin describes (also in Slate) some of the horrible, stifling, unfair taxi laws currently n existence. And then she writes that Yglesias is wrong about Uber:

[T]here are very good reasons to regulate hired vehicles. Giving my friend a ride somewhere in my car has different economic and social implications for a city than picking up a stranger and driving her someplace for a fee, Uber style. That said, Uber should be regulated differently than other taxi services, for a reason that may seem odd at first: The company collects a plethora of data that has never before existed in the cab industry. For the first time, Uber’s data can allow policymakers to directly measure taxi fares, the availability of cars, and the safety records of drivers without having to control every element of the market. If cities are smart, that could mean better oversight with less regulation.

The entire rest of the piece mixes examples of rubbish laws with a creepy hope that Uber’s data can be used for smart regulations of this industry. Listokin could be a lot worse here, but she could be a hell of a lot better. Her faux-pragmatic call for not less, maybe but definitely better laws, with lots and lots of useful data, will sound good to the people who believe it’s the job of private citizens to ask for permission for every endeavor. (Not ask, why shouldn’t I be free to peacefully pursue this? Prove to me why I shouldn’t be able to do this, etc.)

To Listokin, couldn’t it be argued that since cities all over the country have demonstrated that their regulations are not hands-off, not smart, and not fairly applied among different companies, that it’s time for a change? Let’s do it. Let’s go wild west and let people drive one another two and from destinations for a fee. No Michael Badnarik-esque call to rip up our driver’s licenses, no call to abolish auto insurance, for now can’t we all agree to let people drive each other from point A to point B without rubbing our hands together with glee over what else we can get out of it?