Young John Kasich Kissed Up to Tricky Dick in the White House, But They Didn’t Hug John Kasich of Ohio is not BS-ing when he says he knows how to get things done in Washington.

He’s been proving it since he was a freshman at Ohio State.

In 1970, young John was so much in love with Richard Nixon he wrote a 3-page letter of encouragement to Tricky Dick.

But his letter — probably the only love note Nixon ever got from a college student during the Vietnam War — was so persuasive the president invited him to meet him man-on-man in the White House.

Unfortunately, Kasich talked to the hometown press afterwards and said some sweet things about Nixon that he might wish now he hadn’t.

The mailman’s son told the Pittsburgh Post-Gazette he thought Nixon “was very dynamic.”

Worse, the young war hawk also defended Nixon, saying that before people criticize the president they should realize that he “knows more about Vietnam than the public does.”

Kasich is the last Pittsburgh native left in the presidential race. A good bet to beat Donald Trump in the Ohio primary, he’s the Republican establishment’s last hope to derail the Trump Circus Train.

What happens after Kasich wins Ohio, not even Joe Scarborough and Mika can predict.

Kasich is really not from Ohio.

He defected there after college, when Pittsburgh’s steel industry was dying, and made his political career in the Buckeye State as a Reagan conservative with a soft heart and a yearning for balanced budgets and a strong military.

Except that he’s not a union-loving Democrat, he remains a typical Pittsburgher.

He’s not a phony. He’s a regular guy, a rumpled, kind of cranky Everyman, forever the son of a mailman.

It says in the PG’s article that Kasich is from Stowe Township, but he was really from McKees Rocks, which is just an extension of working-class Pittsburgh a few miles up the Ohio River.

He grew up in the humble 1950s suburban brick house pictured below, which,  if Republicans are luckier than they deserve,  someday may be the 20th-century equivalent of Abe Lincoln’s log cabin. 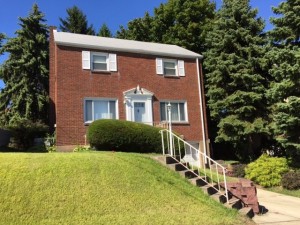